After a long stint of outdoor gigs, the Unified Heart Touring Co. is once again under a roof and safe from today’s rain.

The trucks have been emptied, the lighting truss is loaded and the PA is being prepared for flight. Show day is in full swing. Time to walk to stage. We’re on in Basel. Ain’t No Cure For Love.


Sound Check - Off to Basel to Leonard Cohen! # Fb 4 minutes ago via twitterfeed

SereinaBuetler - http://twitpic.com/2mhalu - Am leonard cohen konzert:) 8 minutes ago via Twitter for BlackBerry® Closing Time, and the venue honestly cannot understand that the shows not quite over yet… A quick change and back to the hotel. Tomorrow we travel to Lisboa. Tonight, we say goodnight.

A fantastic concert in Basel last night. The first half was somewhat static and not many smiles from the master of the show, the second half much more lively, with goodies like 'The Partisan', 'First we take Manhattan', 'Sisters of Mercy'. Other than some new songs and a very active and enduring Leonard (20.00- 23.45!!), nothing truly new compared to the two previous concerts I have seen (Lörrach, 2008 and Zurich, 2008).
Sebbie
Top

One short report from sebbie below.

Plus here,s my report, with some strange punctuation on this Swiss keyboard with some non matching keys..

Actually, I am very lucky to have got to this gig at all. My Easyjet flight the night before, on 7th September from London Gatwick to Basel, was cancelled due to a French Air Traffic Controllers strike, and I waited with about 1000 other people whose flights were also cancelled, in a long line for over 4 hours to get to the Easyjet customer service counter. I was lucky!! Got one of the last flight tickets for the next day *day of the concert!* to Zurich, then took a train to Basel. No sleep at all, no hotels available anywhere near Gatwick, so Gatwick Airport was my overnight stay. Amazing what you can do if you really want to...

Went with a sick Swiss friend with a horrible cold, who lives in Basel and hadn,t seen Leonard since the 80,s, who couldn,t wait to see him again!! When she met me she told me she didn,t have the heart to tell me while I was uncertain I could actually get to Switzerland that "her finger slipped" when she was doing the booking - a comment Leonard may have appreciated!! - and our tickets were not in Row 1 as I thought, but in Row 11.Anyway we could see pretty well, and ran down to nearer the front for the encores..have posted the set list for you, Maarten.

Leonard was in his usual fantastic form as was the whole band, though I noticed Charlie was sitting on a high stool for some of the time. I was expecting a restrained response from the audience as my friend though that the Swiss are not very demonstrative, but people were cheering even just after Dance Me, and they got more excited as the concert went on.

Truly amazing musical intro from Javier to one of my favourite Cohen sings, Who by Fire - which always reminds me Hydra and old documentary of Leonard walking on the agora and the port years ago. Mr Mas is an inspired musician, and he got a well deserved tumult of applause for this. Dino too was celebrated with cheers and applause several times, and he couldn,t stop grinning.

And dear Leonard - loved and appreciated here as everywhere else, smiled a lot and his grin broadened when some intrepid audience members near the front held up a large home made cotton banner with Lover Lover Lover painted on it in big black letters, during the first encore. He didn,t sing it, but he obviously appreciated the banner.

Couple of other things I noticed. During the long encores - and of course if it is your one and only concert, unlike some of us mad fanatics on the Forum, you assume several times that the concert is over - and then it isn,t. Leonard comes dancing back on again. And treats you to another song or two. But quite a few people left in between each encore. Maybe trams and buses stop early in Basel?? Or something. Shame for those that didn,t make it all the way through. The other thing that made me laugh was - from where I was standing during all the encores, a few rows from the front, I could see the silhouette of a dancing man at the front, waving his arms to Leonard,s rhythms and bobbing and jumping up and down. Great fun to watch as a joyful background to Leonard and the band.

Loved it all, nearly 4 hours of it - nearly midnight before the stage was finally empty of musicians and full of technicians. Wonderful stuff, love you Leonard and all. I really want to own Feels So Good, love the words, but I guess it will be quite a long wait for the album.
Top

Basel's St. Jacob indoor tennis hall may not be an ideal venue for concerts, but Leonard Cohen managed to convert the stark coolness of the interior into an arena of shared enthusiasm, affection and adoration -- the place has now been renamed St. Leonard's Hall of the Hymns of Love, or should be so. The ever entrancing protagonist of perfect performance elicited loud laughs as he was asking for small smiles, although he also proved to be the master of moving everyone (well, almost everyone) to tears.

Dear Mr. Cohen, thank you for another wonderful evening.
Yours for a concert,
Susanne
Top

YES it was truly a very fantastic concert in Basel !
My husband and I were sitting first row and as I always
say it was THE BEST Concert ( 7th. concert for me ).EVERY Concert is the BEST in some way !
Standing during the encores in front of OUR MAN is always a highlight

Will post few very beautiful photos tomorrow or a day after... and photo of the
setlist I`m so happy I`ve got... till then... Susanne
Susy
Top

YES it was truly a very fantastic concert in Basel !
My husband and I were sitting first row and as I always
say it was THE BEST Concert ( 7th. concert for me ).EVERY Concert is the BEST in some way !
Standing during the encores in front of OUR MAN is always a highlight

Will post few very beautiful photos tomorrow or a day after... and photo of the
setlist I`m so happy I`ve got... till then... Susanne

yep that would have been me in the front there with the banner. it said 'we loveR loveR loveR you', but I felt like he only looked at it once and probably thought it said 'we love you'. i actually only helped a german lady, about half the size of myself, who desperately tried to hold up her banner in the crowd.
to be honest, i don't think lenni could sing 'lover come back to me' any more, if you listen to that song, it somewhat feels like his voice wouldn't make it any more, it's gone too low, too dark, too slow? maybe he could have recited the first lines and then have the web sisters sing it for him.
anyway, would love to hear some of those old ones like greensleeves, passing through, dress rehearsal rag, let's sing another song boys etc., but we'll probably have to live on the old discs as far as they are concerned.
cheers to all
sebbie
Top

Fantastic, Hans, wish I had heard him do that song! I could only see the banner from behind, so it looked like Lover Lover Lover, and I am sure he saw it and smiled, Sebbie, whatever he thought it said!

My fourth time seeing Leonard and what can one say... the man simply gets better and better each time. The first half, while excellent was on the quiet side, perhaps Leonard was pacing himself a little but the second part, simply stunning. The band was in super form and Javier is just a genius. The plaintive strings of "Gypsy Wife" can take you to another place, hit you in a place you don't know but can feel and make you ride a sea of emotions. There are not many in the music game who can do that.

The new songs are also great, especially enjoyed "Feels So Good" and the reception for Hallelujah was simply ecstatic. The version of Chelsea Hotel was also top class, Famous Blue Raincoat even better (is that possible?!) and all in all..... a just perfectly delivered performance.

And typically of Leonard... great value. He came on stage at just after 8PM, had his 20 minute break and played until 11:50PM. What other artist gives that kind of value and gives it all, right from the heart.

As Lou Reed said in his little piece to welcome Leonard into the Rock and Roll Hall of Fame "we're so lucky to be alive at the same time that Leonard Cohen is".

God bless you and keep you well Leonard, keep composing, writing, touring and giving us wonderful experiences like that on Wednesday last in Basel.
Top

Hi Friends,
with my little poor english knowing I just can`t find the right words to
express my own feeling before,while and after this fantastic Concert.....
I think it is much better to show you some of the photos I`ve made !

The Tower Of Song 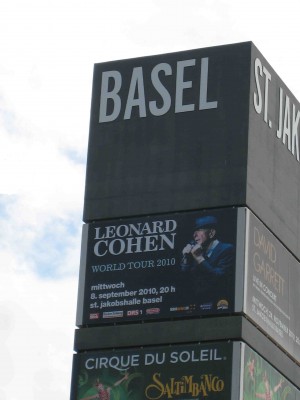 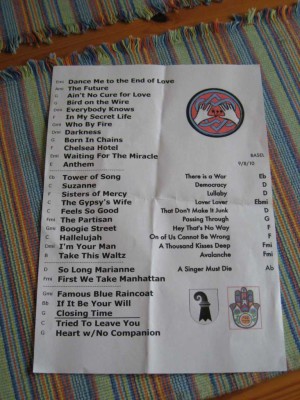 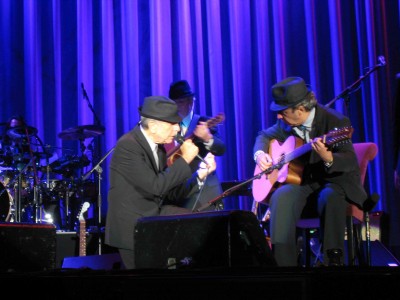