LC and band heading to the venue, almost time for soundcheck. Bob Metzger gets hands on and tunes the pedal steel before soundcheck.

According to an email from Charley, it has been raining in Odense this afternoon. Not good for an outdoor concert. Hopefully it will be dry by tonight.
1988, 1993: Helsinki||2008: Manchester|Oslo|London O2|Berlin|Helsinki|London RAH|| 2009: New York Beacon|Berlin|Venice|Barcelona|Las Vegas|San José||2010: Salzburg|Helsinki|Gent|Bratislava|Las Vegas|| 2012: Gent|Helsinki|Verona|| 2013: New York|Pula|Oslo|||
Top young halfgirl - Traveled 6 hours by train to get to Odense for Leonard Cohen tonight. "Tired" does not even begin to describe my current state. about 3 hours ago via Echofon

sound space - @ Jacobchr Is it Leonard Cohen, who has made weather happier? 39 minutes ago from web in reply to jacobchr 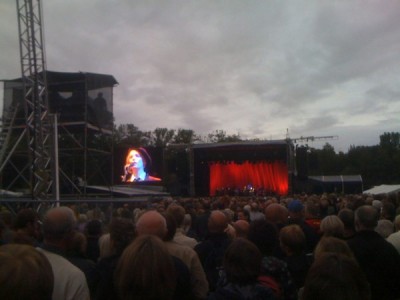 michaelsloth - Leonard Cohen Plays in my backyard Odense - Fruens Bøge "Boogie Street" are on right now - fantastic!! 3 minutes ago via Twitter for iPhone

After soundcheck, Javier Mas plays a little melody as Hattie Webb dances along. Doors are open, dinner is on and the rain seems to be staying away, though there are some dark clouds on the horizon. Show starts in an hour. Hattie and Charley Webb finish their solo and another stunning show has wrapped.

Despite a slight scare, everyone is fine and the entire band is heading to the hotel.

Next up for the tour is some much needed down time in Berlin.

Already there is video!

“Despite a slight scare, everyone is fine and the entire band is heading to the hotel.” reports Joey on his excellent diary and there was a tweet from the audience too about that "slight scare" I guess

Maybe to use an ancient word..."swooned"

However, hope she/he is back to normal now...and yes, let them all enjoy a very short break! For the sake of all the fans I'm so glad the sky did not produce raindrops!!
Top

The effect of Leonard! People fainting when they see him, bless

Hey, just Got back from the concert. Will review tomorrow. It was one of the Webb sisterS (Hattie) WHO fainted- got up again and Sharon held her hand, but she had to walk out for a bit. Was back within 4 minutes.
Malmö, Sweden - August 4th 2010 - see you then Mr. Cohen
Top

Google translation strikes again. This is a good one!! Leonard Cohen in his underwear.

And then Leonard Cohen on stage at the meadow in Odense.
Photo: BRIAN KARMARK

Leonard, He Goes Right in Underwear

Inclined, comfortably, quietly. Noble. The audience at the concert with the aging Canadian star Leonard Cohen could not be more neatly. Not a bottle was thrown, no shouting, and Police Home Guard had no controversy - okay, there was just a couple of taxis too much sometimes.

But it was with very different approaches men and women came. All of course to listen to the atmospheric almost meditative basstemme, but Leonard can be something with the ladies, as a fresh pair Copenhagen girls Michelle and Catherine confirmed.

He is just in underwear. And we know that he is 75 years old but he is almost just got even sexier, "said the two while they shared a bottle of icy white wine while they waited to be admitted.

Cohen is the respectable audience, and I must say that it is quietly getting people into. Everyone komemt in good time and all are prepared to get a fantastic evening, "said Tue Kempf from Odense Sport Event, who ruled the show. Before, during and after. Especially with it after the Sunday should be free path to the Opera in the Meadow, which probably draws twice as many as 12,000, which was to Leonard Cohen.

Saturday evening was Leonard Cohen's evening in Odense when he stood on stage in the Meadow in Beech mistress.

Not many odenseanere noticed that a world champion walked around in a
café environment surrounding Franciscan place at dinner time Friday evening.
But it was go 'enough. First he took Manhattan and Berlin - and then took his final Odense.
Photo: YILMAZ Polat

Cohen Enjoyed Themselves in the Middle of Odense

Saturday's mega-star had a sandwich in the open air cafe in yoghurt.

Odense: It's go 'enough. The man with the voice that makes women's hearts to melt and grown men to cry, have come to Odense, where he will give a concert Saturday evening.

At 19 o'clock Friday met Fyens Stiftstidende the charismatic man in the little cafe yoghurt at Franciscan Square, where he and a few friends had enjoyed the mild August evening, without many took notice of it - and even though he in a few hours is at scene in the Meadow in Beech mistress for a long sold out concert.

A black dressed man offering to sell something that people will not be up to the concert with Leonard Cohen. It was tickets to the concert , which he sold . Prize. Uncertain. But tickets cost £ 650 as a starting point so they have probably been cheaper ...