I almost feel ashamed to write anything about the concert after TheSpice-BoxOFEarth, because anything I can say sounds clumsy after so rich and sharp report.

But here are some of my feelings:

This concert was my first time to see LC live and my expectations were indescribably high, as you all can imagine. And I have to say that they were more than fulfilled.

The atmosphere. I didn't have any great surges of emotion, I just sat there on my third row seat next to my dear wife and enjoyed. I hardly dared to blink or breath, because I didn't want to miss the tiniest part of the concert. LC's performance was so intense and full of presence that I had look around every now and then to check that me and my wife aren't the only ones there besides Leonard and the band. Naturally the more-than-deserved storm of applause reminded me of the rest of the audience

The band. It was not a surprise to even a first-timer like me that all the musicians were first-class professionals, but even so their skill and their teamwork took my breath away. Every one of them got their moments, but no one of them tried to shine above others. That was Leonards job

But still about the band, I can't imagine more beautiful voices than the Webb sisters' and the way Roscoe Beck plays bass makes any other bass player sound empty and hollow. Any member of the band would deserve their own words of praise, but you get the idea

And that kind of artists are willing to play just their own part!

Leonard himself. First thing I remember about LC is from the 80s, when I heard Dance me to the end of love in a Finnish television's music show. I was about seven years old then, but his deep voice made a indelible influence on me. To hear that voice live was definitely a dream come true to me. The same voice still gives me the chills everytime I even listen to LC's records. You all can imagine the effect his voice had on me heard live.

I was surprised to hear about the problems in seating, especially because there was two empty seats next to me on the third row.

One detail about our trip to the concert I want to add. We live about 600 kms away from Helsinki. We travelled to Helsinkin with our car and one of the places we stopped along the way had a little jumble sale next to it. We decided to stretch our legs and have a quick look to it. And there I found a very well-shaped Recent songs vinyl-LP. It is mine now

Show me the place
Where the Word became a man
Top

JanneK wrote:I was surprised to hear about the problems in seating, especially because there was two empty seats next to me on the third row.


Aarggh, please, don't turn the knife in the wound

. Anyhow, Menolippu promised to refund the price of one ticket. I would have rather taken tickets to third row in another LC concert, but maybe that would be a bit hard to arrange, hockey season starting in a couple of months and all.

The Webb sisters sang some new lyrics in the latter part of 'If It Be Your Will'. Does anyone have them written down somewhere? I couldn't make out what they where singing, but it was quite breathtakingly beautiful. I caught something in my eye during that performance.
Top 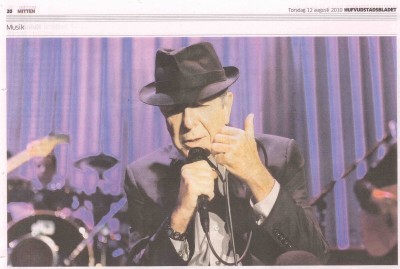 AAMULEHTI, the daily newspaper in Tampere: 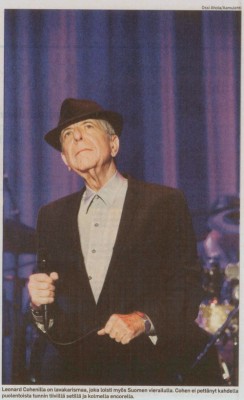 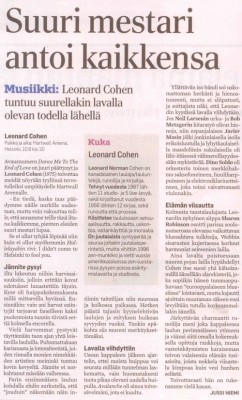 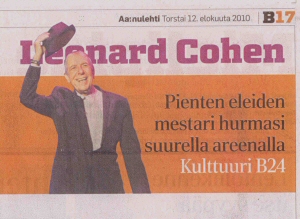 Some after-concert meetup photos by Vesa Tapiola. More of his and Maarten's photos coming soon! Oh, god! We stood one hour for waiting for a miracle to come = waiting for taxi!! And You have been having fun with lovely sisters! I did not notice, if Dino was there.. Anyway we waited for taxi ONLY one hour to have a nice dinner in Helsinki city. Anyway: LC and his perfect orchestra was magnificent! We hope, they will come back, will they!!??!! Thanks for unbelievable team and thanks for Jarkko! We have participated now concerts twice in Finland, once in Budapest, Copenhagen and Barcelona (and of cource once in 1993 in Finland)! All of them have been better and better! Should we still wait for a miracle to come?? Leonard himself is the miracle!!
1993: Helsinki
2008: Copenhagen, Helsinki
2009: Budapest, Barcelona
2010:Helsinki, Stuttgart
2012:Ghent 17th and 18th Aug, Helsinki, Bucharest
2013:Brussels, Berlin, Pula, Stockholm, Oslo, Amsterdam
Top

By the way, we were told that Leonard and the band rehearsed at the sound check a new song with working title "My Oh My". This was the second time they played the song, so I don't think it will appear in the set list in the near future.
1988, 1993: Helsinki||2008: Manchester|Oslo|London O2|Berlin|Helsinki|London RAH|| 2009: New York Beacon|Berlin|Venice|Barcelona|Las Vegas|San José||2010: Salzburg|Helsinki|Gent|Bratislava|Las Vegas|| 2012: Gent|Helsinki|Verona|| 2013: New York|Pula|Oslo|||
Top

Alright, I finally feel able to write something sensible about the concert. I've been lost for words.

When I couldn't make it to the concert in 2008, I was extremely pissed off. So much in fact, I couldn't watch the DVD or any Youtube videos. Because of this I didn't really know what to expect. Having read all the praise about the other concerts, I was afraid I would feel disappointed. I didn't. This was by far the best concert I've ever seen (and I've seen a few). I also have the feeling other artists' concerts won't impress me that much after this one...

I had tears in my eyes already during the first song. I never thought I'd feel as emotional as I did. Everything was just so wonderful: Leonard and his amazing aura of presence. The songs. The arrangements. The backing singers. And last but definitely not least: the band. There were so many highlights it's hard to pick any, but let's try: Who By Fire with the intro, The Darkness (so powerful!), Everybody Knows, Take This Waltz, Boogie Street, First We Take Manhattan... I had a great seat (thanks Jarkko!), which made the experience even more powerful - usually I've been sitting (or mostly standing, actually

) on the stands and further back, which isn't quite the same. It was great to be that close and watch the interaction between the band members. When Leonard left the stage, I remember thinking "What a man!"

I too saw some empty seats in front of me (third and fourth row) and wondered what that was about.

Once again, thanks for making this possible! I feel somehow changed after that evening.
Top

One possibility crawled into my mind, but I really wouldn't want to think about it. Just thought that maybe our tickets should have been in block B, but were just for some reason misprinted, as I did get them quite early from the pre-sale. The sale should have began at sunday 25.4. 8.00 am, and when I was checking that the connection was working, for my surprise the sale was already on 15 minutes earlier (7.46 according to the confirmation e-mail). When I received the tickets, I was a bit surprised that the tickets were to block A, but then I thought that it was just computer logic that the best seats would be in block A. At the concert the tickets were inspected by the couple sitting on our seats and two members of the security personnel, so I am quite sure they did say block A.

Now to think of it, I remember someone writing in the pre-sale-thread about getting tickets to seats 15 and 16 when there were only 14 seats in a row. Wonder how things turned out for them. Or perhaps they were the two ladies sitting next to us.

But from the happier side of the concert, another highlight for me was the little bit slower version of Chelsea Hotel #2 (or is it actually Chelsea Hotel #1, I remember reading somewhere the song was originally slower?). The change of tempo really added a cherry on top of that song. I really hope there will be some kind of publication from this tour also, so many songs had been re-arrenged from the 2008 tour. And the band really is getting better and better, something I wouldn't have believed to be possible after the 2008 concert.
Top

Mr Cohen doing some hand whistling during Heart With No Companion:
http://www.youtube.com/watch?v=jNJ6zj3txIU

He caught me by surprise, so it's only 20 seconds long...

Maarten wrote:Mr Cohen doing some hand whistling during Heart With No Companion:
http://www.youtube.com/watch?v=jNJ6zj3txIU

He caught me by surprise, so it's only 20 seconds long...

Thanks Maarten! He apparently did more hand whistling last night - and I hope he does more.

This appears to be a constantly evolving concert tour! New songs..attempting and revising new lyrics..throwing curves with old songs...fabulous!! Everyone, enjoy each moment!! You may be watching a moment or song or lyric that has NEVER occured before! Incredible!!
Last edited by ladydi on Sat Aug 14, 2010 1:23 pm, edited 1 time in total.
Top

Maarten! Thank you for capturing that wonderful moment! I love to see Leonard having fun, and he keeps rolling out surprises! He's so awesome!