I think you forgot the Chelsea Hotel

The concert was terrific, the audience was surprisingly passionate, singing along and dancing in front of the stage during the encores. I will never forget it, it was a wonderful night.
Eva
Top

Maarten wrote:
After his keyboard solo during Tower Of Song, mr Cohen said: "I knew here in Salzburg you'd appreciate a good piece of music", refering to Salzburg as the city of Mozart of course. Really funny line.

It was the fourth Cohen concert I saw, and what could I say?
This guy is getting better and better by the decade!

There was this legendary concert he played for free in the Vienna Arena way back in the seventies, when we jumped and shouted thru the night and Lenny was one of us. I still got some recordings on an old cassette player.
However, he's so much wiser and better now, this man has been enlightened!

And his musicians are first choice every single one of them a virtuoso!
Most of all I appreciated the new songs, they are gorgeous!
Another evening with L.C. that I will never forget!
I used to stick the tickets of his concerts to the LPs, CDs, DVDs every time I saw him, hope his new one will be out before long, there's ticket waiting ...

BTW, we found a real nice club "Republic" in the city with live music thru three o'clock!
Top

Eva,
You're right and I've added it to my list. My mistake... And now I can (finally) put a face to your forumname at last!

[quote="Maarten"
Set 1
...
Everybody Knows
In My Secret Life
Who By Fire
BORN IN CHAINS (Tour debut & World Premiere)
Waiting for the Miracle
...

Thank you for your superb detailed concert reports.

If your guess is correct about eliminating Gypsy Wife, I wonder if this will be the pattern. Last November in Nashville, St Louis and K.C., whenever he sang one of his new songs, Darkness or Feels so Good he replaced "Hey No w/say Goodbye" which was listed on the left side of the paper set list. By Las Vegas and San Jose, Hey n/way was completely off the paper set list.

Maarten, do you have a photo of the Salzburg paper set list/stage list? It would be interesting to follow the evolving pattern over the tour and to see how the stage list looks by the time he does concerts later on, maybe even as early as Ghent. 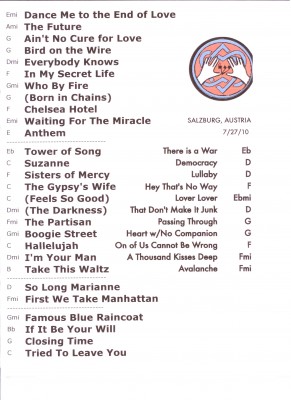 All songs in the main list except The Darkness were performed, and in this order.
(Click on the list to get a full size scan!)
1988, 1993: Helsinki||2008: Manchester|Oslo|London O2|Berlin|Helsinki|London RAH|| 2009: New York Beacon|Berlin|Venice|Barcelona|Las Vegas|San José||2010: Salzburg|Helsinki|Gent|Bratislava|Las Vegas|| 2012: Gent|Helsinki|Verona|| 2013: New York|Pula|Oslo|||
Top

Hi all,
thanks for the postings and thank to the Salzburg compagnions for the nice evening together,
we were lucky, had a superb concert , Leonard was in extremly a good condition and his group too was fabulous. Heartful thanks to Leonard and his team.

Here a link I found

jdhayes wrote:Maybe there will be howls of protest but I would much prefer to hear Nancy or Undertow than Born in Chains. Many of the old songs are much better. Just my personal opinion. And maybe live it sounds better than on YouTube.

Everyone has a right to their own opinion of which songs are best; some people will always prefer the earlier material, some the more recent stuff and others may just have opinions which are just plain contrary (my husband for example hates both Suzanne and Hallelujah with a passion and thinks Boogie Street is the best thing in the set.) But whatever we all think, the bottom line is Leonard has moved on and will want to play new material when he thinks it is ready for a public outing. I for one want to hear the new songs as they develop.

Maarten wrote: And now I can (finally) put a face to your forumname at last!
Maarten

It was nice to see you, Maarten! I missed the forum members in Graz

Does anyone know of a recording of "Feels So Good" from Salzburg?

Oh, Maarten, thank you for capturing the new song on video! All I can say is, Wow, it is so beautiful! And, thanks especially to Leonard Cohen, who continues to touch our hearts with his gift of music. (if I had a heart icon, I would insert it here)
Top

andrea wrote:Hi all,
thanks for the postings and thank to the Salzburg compagnions for the nice evening together,
we were lucky, had a superb concert , Leonard was in extremly a good condition and his group too was fabulous. Heartful thanks to Leonard and his team.
Here a link I found
http://www.salzburg.com/online/nachrich ... ext=&mode=&
Andrea

Leonard Cohen, one of the most important songwriters of the present,
inspired in the Salzburg Arena with a concert full of gratitude and humility,
Source: SN / Heinz Bayer

Salzburg (SN). Leonard Cohen takes the hat. Again and again he does that. He pulls his little black hat from his head, he sticks to his chest, looks up and leans her head humbly down. His smile, which accompanied the Hutzug tells of satisfaction. However, it is not the arrogant type, but from those with which someone shows how much he can not make happiness. In this gesture to the audience and much more to his musicians on stage is one part of the Salzburg Arena gratitude and humility that audience with a high concentration and enthusiasm in applause answered that.

The man, 75 years old and one of the most important songwriters of the present, so one of the most important poets of the 20th Century plays, once again live. And because this is so beautiful and touching, it must be the fact that Cohen was cheated out of its financial managers million, considered a lucky coincidence. He would probably never come out of his monastery, where he had once withdrawn. And we would have missed an evening full of beauty of poetry, filled with devotion and with some of the best songs ever written. Cohen is not limited to the management of an artistic treasure. He makes noticeable with fine nuances of his songs, so fresh experience, although many of these songs - Suzanne, Bird on a Wire, Hallelujah, First We Take Manhattan and Anthem have long been popular songs of the present, the sums in a socialized through poetic pop music everyday.

"Who knows whether we shall meet again," said a sometimes exhilarating, slightly prancing, but most of his songs in-depth, thoughtful Cohen before the first note. Much time is no more and he wants to use, and therefore he would "do everything". And he does it three and a half hours (with intermission).

An acclaimed worship takes place there, with a gracious gentlemen, a holy form of combination of word and sound. But he has a fabulous and tempered over the years to every subtlety well-rehearsed band involved. Outstanding but the three choral singer who support discreetly and accurately Cohen's velvety smoky voice. The result is a blend of eeriness and seduction, which you can not help but pay tribute with a deep bow of respect.

If I had a hat, I would come to nothing other than drag it to Leonard Cohen.

A MP3 of "Born In Chains" created by converting Maarten's video of the Salzburg performance of that song, is now available for downloading. See Leonard Cohen – Born In Chains MP3 at http://1heckofaguy.com/2010/07/29/leona ... hains-mp3/
Cohencentric http://Cohencentric.com
Top

We have full MP3 recording of the both shows in high quality. Only problem is too loud applause. Salzburg rec. is great as there was silence during the songs, clapping can probably easily be remixed, while Zagreb rec. is not quite an audiophile heaven, but the living evidence of the people giving themselves to him.
Leonard Cohen Newswire / bookoflonging.com (retired) / leonardcohencroatia.com (retired)
Top
Post Reply
98 posts