It's still two hours to show time - so these are all obviously pre-show tweets.

Sometimes there is a vague feeling of possibly intruding on/reading/listening to people's private conversations - but for one minor detail. These are "TWEETS" - that people have sent out for anybody/everybody/all to see. That is Twitter.

vivi_best Just got an invite to fly down to LA for the weekend to meet with Leonard Cohen's manager to talk about potential book. Too excited to speak about 5 hours ago from Echofon

annaraven RT @xsanguin: My friend @novabella is trying to get a post Leonard Cohen tweetup together tonight after the show, please RT! about 5 hours ago from TweetDeck

XTommyTheKatX On the way to San Jose to see Leonard Cohen play the last show of his world tour. Been waiting literally half my life to see him play. about 4 hours ago from mobile web

Notmi Getting our grub on for a quick flight to San Jose for LEONARD COHEN and his last tour performance. about 4 hours ago from TwitterBerry

la_perkins just over 6 hours to Leonard Cohen time! about 4 hours ago from web

uuilly Going to see Leonard Cohen tonight. about 4 hours ago from Tweetie

XTommyTheKatX On the way to San Jose to see Leonard Cohen play the last show of his world tour. Been waiting literally half my life to see him play. about 4 hours ago from mobile web

blowsmyskirtup Going to go see Pirate Radio before hitting the HP Pavilion for Leonard Cohen. about 3 hours ago from web

area525 Leonard Cohen down in San Jose tonight -- I've waited nearly 30 years to see the man and I'm SICK. This is so unfair but I'm medicated... about 3 hours ago from web

raindrops_SF Leonard Cohen tix gone missing. Slight possibility to replace - we paid cash, but I have a pic of them. Still a crapshoot. 'Salways somethin about 1 hour ago from web

jonsavage At a pre concert party prior to attendiing Leonard Cohen in a couple of hours. The bar is ours! 40 of us here. 38 minutes ago from TweetDeck

pacificbrewnews Is in San Jose enjoying a glass of wine before Leonard Cohen takes stage at 8. 9 minutes ago from Echofon

aokarim Off to see some pitchfork flash-in-the-pan named Leonard Cohen. 27 minutes ago from txt

miranda622 How do you know if you are at a Leonard Cohen or Bruce Springsteen show? Let this be your guide. http://su.pr/1Htump about 1 hour ago from Su.pr

Kcecelia At the Fairmont in San Jose. Going to the HP Pavilion to see Leonard Cohen. 16 minutes ago from Twittelator

blowsmyskirtup Sure, I could've walked to the Pavilion but the bus was there & I'm lazy. The driver & I are bonding over our mutual Leonard Cohen love. 1 minute ago from txt

cgirardmusic Sitting here at HP Pavilion in San Jose with Paul Coca. 1 hr to downbeat for Leonard Cohen. 5 minutes ago from Ping.fm

thismirage http://twitpic.com/pfnh7 - Stage an hour for leonard cohen concert!!! 2 minutes ago from TwitPic

This one will keep you busy -


daniellelaporte 20 minutes to Leonard Cohen. I can hardly breathe. 2 minutes ago from txt

Pictures of the venue -

djmacalintal Okay, who's Leonard Cohen? Waiting for his concert to begin at the SJ Arena. http://twitpic.com/pfrlx 1 minute ago from Echofon

BillShepp http://twitpic.com/pfs8m - Much better seats for Leonard Cohen than I expected - floor, row 13. 5 minutes ago from TwitPic

saltinekrispy I'm at a Leonard Cohen concert in San Jose. Haaaay! 5 minutes ago from Echofon

johnperrybarlow On the way to San Jose to hear Leonard Cohen for the 2nd time since May. Meanwhile, he's been on road for 6 months. 2 minutes ago from web

caroompas Getting ready for Leonard Cohen's final US show at San Jose's HP Pavilion. 2 minutes ago from TweetDeck

nadyne has good seats for the Leonard Cohen show at @hppavillion - http://twitpic.com/pftd8 #fb 4 minutes ago from Twitterrific

CJHayden Leonard Cohen is about to walk onstage here in San Jose. Thrilled to be seeing him live after being a fan for decades. 2 minutes ago from Ping.fm

AND SO IT STARTS -

mutgoff In a suite at Leonard Cohen. This is fun! http://yfrog.com/7hybobj 2 minutes ago from Tweetie

trammell In San Jose with wonderful company for Leonard Cohen. The guy still has it. I want to be this man when I grow up. http://yfrog.com/5a255aj 1 minute ago from Tweetie

DanKimball in San Jose at Leonard Cohen concert with my friend Brad. Leonard is 70-something years old. Magical and a legend. 11 minutes ago from txt

DanKimball Leonard Cohen often drops to his knees while singing. Eyes closed like he is praying. 2 minutes ago from txt

KathyHarget Leonard Cohen is amazing tonight at the hp pavillion in San Jose! 1 minute ago from txt

BoBurlingham At HP Pavilion in San Jose with Lisa for An Evening with Leonard Cohen. Indescribably fantastic! Lisa's birthday present. 30 minutes ago from Twitterrific

soozworld What a treat to see and hear Leonard Cohen live...velvety smooth voice! My first US gig too. 28 minutes ago from Twitterrific

winnig In between sets at the Leonard Cohen concert. He is full of so much awesomeness, and is the most gracious performer ever. Band is great. 28 minutes ago from Twitterrific

uuilly At Leonard Cohen show. A rare glimpse of a master. 25 minutes ago from Tweetie

schwindlar In San Jose watching one of the best performers ever: Leonard Cohen! 20 minutes ago from HTC Peep

RachelKathryn8 how in god's name have I lived for 21 years without Leonard Cohen in my life?! 20 minutes ago from web

metronewspaper via @stevepalopoli: Three standing ovations for Leonard Cohen and the show's only half over. 2 minutes ago from GroupTweet

sarahdoran http://twitpic.com/pgn5j - leonard cohen on stage about 4 hours ago from TwitPic

bean My hat's off to you, Leonard Cohen. (via @kari_mah) He and the band were magnificent. A spry and sexy 75!! about 4 hours ago from Tweetie

Great concert, with both new songs, and lot of polka dot blouses (hope Leonard liked them....

Leonard and the band definitely deserve a break.

ps.
was sooo glad to put faces on familiar avatars (Lizzy, Diana, MaryB, Maarten, Mollydog, friscogrl, Bill's Bar, Vlasta, sorry if I forgot somebody, it was quite hectic)
sorry couldn't stay for the party (just injured my knee), hope to see you all guys next year in Krakow

GREAT:) hope he has a good break now

phillip from UK England
I have been a Leonard Cohen fan for 28 years feel free to email me if you wish to keep in touch!
Top

Rosco, Hattie and Rafael in the foyer before the concert, doing the meet and greet routine, and doing it very charmingly
a masterful performance on stage by LC and by the band
the performance of 2 new songs, the Prisoner song and the Darkness - that latter particularly showing evolving signs of maturity
and an additional, extra encore - Democracy is coming to the USA - with a somewhat cautious introduction - "this is not about the present regeim, the previous regeim or the future regeim, its about you and me" - the response to this was just a little muted

Misty
“When legend Cohen takes to the stage, it’s no less than a cultural event of Biblical dimensions.” – The Independent
Phoenix 2009; San Jose 2009; Las Vegas 2010
Top

I am still in the San Jose hotel packing up to go home after a 12 day adventure of 5 concerts in Leonard Cohen concert paradise. So just a few preliminary thoughts.

Number one thought this morning, is a tremendous THANK YOU, JARKKO for everything you do to enhance all the fans' enjoyment.

I would never have undertaken this amazing, awesome (and exhausting) concert journey were it not for you.

Many thanks to ladydi/Diana and to mutti/Leslie for organizing all the great happenings in both Las Vegas and San Jose. Your grace and "sense of moment" are impeccable.

Thanks also to Maarten for his beautiful artistic name tags and lanyards. It made it easy to spot other fans whether we knew them from before or not. Fans introducing themselves happened in many places because of wearing the name tags. People in the audience often asked me, "How can I get one of those name tags?" Ah, that was my cue to tell them about leonardcohenforum.com.

For now, I just want to share two highlights from last night's concert in San Jose.

One highlight was the awesome sight of the forum fans gently waving their green light tubes during Suzanne.

mutti/Leslie's idea for this was obviously appreciated by LC when during the song he added. "Thank you for the lights, Friends."

Albert Noonan has assured me that he captured this and I eagerly await seeing his video soon. For now, here is my humble video of Suzanne. http://www.youtube.com/watch?v=AsjO4kWsfQU

The other highlight was the feeling of great emotion when I looked out at the hockey arena of about 17,000 people giving Leonard Cohen a standing ovation. (And you all know by now my feelings about concerts in a hockey arena.) It was overwhelming! 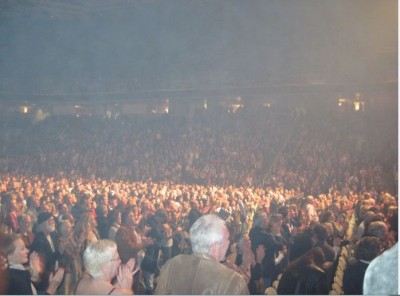 What a night! I finally succumbed to the temptation (with "little" persuasion from "The Management" at home) and made it to both Las Vegas and San Jose.

Here is one of the highlights of last night in San Jose.

thanks for sharing the video

I just watched "Closing Time" - so glad you captured that.

At the end of your video, I see Bob Metzer holding up and examining one of the blouses.

Looking forward to hearing more details from those "women."

It was a magnificent show. Thank you to the forum members for the glow sticks, the blouse-throwing antics, and the fantastic spirit which infected the whole audience. You guys are great.
Top

IrishAL wrote:What a night! I finally succumbed to the temptation (with "little" persuasion from "The Management" at home) and made it to both Las Vegas and San Jose.

Here is one of the highlights of last night in San Jose.

Another masterpiece! Thank you, Albert. Your video confirmed what I thought I noticed last night. LC lost his place around 1.18. No wonder. I was sitting on the side and the sight of all those forum fans throwing dozens of blouses on the stage was absolutely awesome. No wonder LC went off his lines. I guess one just had to be there!
2009-San Diego|Los Ang|Nashville|St Louis|Kansas City|LVegas|San Jose
2010-Gothenburg|Berlin|Ghentx2|Oaklandx2|Portland|LVegasx2
2012-Austinx2|Denver|Los Ang|Seattle|Portland
Arlene's Leonard Cohen Scrapbook http://onboogiestreet.blogspot.com
Top

Was there any nudity involved? I couldn't make out what you were showing at 5.00...

"We are so lightly here"
Top
Post Reply
322 posts