Just arrived home about an hour ago and got my PC fired up. I've had a bit more sleep than when I last posted and the pain meds have finally kicked in so I wanted to come here and apologize to both goldstei and bluesimp for my offensive defense of my hometown venue. I'll "...not choose a coward’s explanation that hides behind the cause and the effect..." and just say I was acting like a crabby old lady and I'm sincerely sorry for my behavior.

I think we can all agree it was a marvelous show and the night was magical. Bob, after meeting you in person and finding out how delightful your humor is face to face, you will forever be "Louie" to me

I thoroughly enjoyed the meet up in spite of the amount of pain I was having. Old age is not for sissies and I just hope I can be as young as Leonard when I get to his age

The man is phenomenal. I envy his ability to move the way he does. Given the opportunity, I'd endure the pain again in a heartbeat...just might bring the walker for a place to sit when necessary and start the meds earlier

Well, I'm heading off for a good night's sleep in my own bed. So glad I was able to share this experience with all my new friends. G'night all!

Lili
Lili
"Well, that's my story
I admit it's broken and it's bleak
But all the twisted pieces fit
A 1000 kisses deep."
Top

Some video posted to YouTube by "snivelttam" Thanks!
It is not from close up but its good, and you can see. And you get a very good view of the whole stage.
And it is whole songs.

I Tried to Leave You - wonderful improvising by all - and it looks like Rafael caught the stick.

unable to access the bridger-posted pre-concert meetup photos--can u post them via some other means that does not require passwords, etc?
Top

goldstei wrote:unable to access the bridger-posted pre-concert meetup photos--can u post them via some other means that does not require passwords, etc?

Bob, I am in Las Vegas now and my mind is somewhat occupied with all the excitement and activities of the next two days for um...well, you know. So I will put something together for you after I get back to L.A.
---Arlene
2009-San Diego|Los Ang|Nashville|St Louis|Kansas City|LVegas|San Jose
2010-Gothenburg|Berlin|Ghentx2|Oaklandx2|Portland|LVegasx2
2012-Austinx2|Denver|Los Ang|Seattle|Portland
Arlene's Leonard Cohen Scrapbook http://onboogiestreet.blogspot.com
Top

Arlene, I just want to thank you for all your postings of videos and photos of forum friends. It really is wonderful matching all these beautiful faces to the names of our Cohen family forum friends etc. (I am so touched I am just writing all the words I can think of!) I do wonder how you manage to remember all the names - I didn't notice any notepad in Nashville(?), (where you joked that you are "not just a pretty face"; but you ARE a beautiful face, and quite brilliant as well! Thank you for your gorgeous posts. . .
Top

I was able to access the meetup photos today w/o trouble, tho before I couldn't for some reason as youtube was asking for passwords; anyway, thanks Arlene for this and for making, probably, most of us look better than we actually do!

An astounding thing happened during the St. L. meetup dinner. Tho I live in Michigan and had virtually never been in the KC/St. L area in my life, I happened to have lined up some lectures in the area for Oct. 27-31, arrangements solidified shortly before Leonard without consulting me (!!!) announced his Nov. 7/9 St. L/KC concerts. As it happens the concerts announced for near me (Chicago, Cleveland, Columbus) were impossible because they were set for the Oct. 27=31 period when I was committed to speaking in the St. L./KC area, so I decided I would have to make a return trip to this area I'd virtually never been to before (as in Kansas City, Kansas City here I come--one of my lectures was at the KC, MO public library Plaza Branch, a beautiful building which clearly demonstrated that "everything's up to date in Kansas City," so in the lecture I "went about as fer as I could go," in the (disappointed hope) of finding a "purty little woman there." Anyway, at all five of my lectures, including 3 at the U. of Mo-Columbia, I urged people to got see LC when he arrived and told them about how amazing the concerts were and that I was planning to return from Michigan just to see them. At the dinner meetup across the way from the Fox in St. Louis (a dead ringer for the Fox in Detroit, clearly built by the same folks at the same time--1929 I believe, when a huge numbers of massive buildings were completed just as the economy collapsed in Great Depression 1) a young man came up to me and said, "Did you just lecture at the U. of Missouri at Columbia?" Turned it he had been in the audience (Columbia is 100 miles or so from St. L) and had bought a ticket due to my pitch for LC (he was very surprised that I really would return just for the concerts). It was nice to see that least one person listened to what I had to say once in my life!! Anyway, I asked him to e-mail me with his reaction to concert and he sent me this:

"Hello, I just wanted to tell you that I really enjoyed the concert Saturday night. I didn't know what to expect, but I wasn't disappointed. The theater was beautiful, the house was packed, and Leonard Cohen put on a great show.

Thanks for the suggestion"

Incidentally, nobody has mentioned that for about a second during the ST. L. concert the entire theater went dark (pitch black) as they were playing. Somebody on the light crew must have hit the wrong switch. It was just long enough so that I'm sure people were mentally saying OMG, but not long enough to actually disrupt the music or anything else. I thought the KC version of "other blues song" was infinitely better than you tubes from earlier performances, where LC seemed to be do a poor imitation of a "Nashville Skyline" type soft spoken bluesy Dylan that I don't much care for in the first place. AT KC he made it his own song and it was good (I couldn't even listed to more than 30 seconds of the earlier version that I tried).

To add something totally irrelevant: On Nov. 10 I saw BRUUUUUUUUUUUCE in Cleveland. I resisted at first because: 1) he started, as usual, an hour late, while LC always starts on time; 2) the stress was on LOUD rather than art; and 3) compared to LC's humility, Springsteen struts like TV wrestlers. However, after about 1/2 he wore me down because he really IS good. Like LC, performed for three hours (w/o break!), with two especially amazing performances: 1) "Your love is lifting me higher" (originally made famous by Jackie Wilson) and 2) "Back in your arms again," which I understand that he wrote. As far as I can tell, Springsteen has not recorded either of these really incredible songs (as done by him)--if I'm wrong please correct me! You can find rather inadequate you tubes of both however--go for the longest possible Springsteen you tubes of both (one is 10 minutes exactly as I recall, I don't remember for the other). Live, these very good you tubes are four times better!
Top

Incidentally, nobody has mentioned that for about a second during the ST. L. concert the entire theater went dark (pitch black) as they were playing. Somebody on the light crew must have hit the wrong switch. It was just long enough so that I'm sure people were mentally saying OMG, but not long enough to actually disrupt the music or anything else.

Thanks for mentioning this Louie

Always nice to get feedback that you have been heard. So glad you ran into one of the attendees of your lecture. Great story and seems you've brought another into the "fold."

Lili
Lili
"Well, that's my story
I admit it's broken and it's bleak
But all the twisted pieces fit
A 1000 kisses deep."
Top

Incidentally, nobody has mentioned that for about a second during the ST. L. concert the entire theater went dark (pitch black) as they were playing. Somebody on the light crew must have hit the wrong switch. It was just long enough so that I'm sure people were mentally saying OMG, but not long enough to actually disrupt the music or anything else.

Thanks for mentioning this Louie

Always nice to get feedback that you have been heard. So glad you ran into one of the attendees of your lecture. Great story and seems you've brought another into the "fold."

I was lucky to be at this show in the second row and the brief blackout startled me for a bit, but then I noticed that no one onstage seemed fazed by it at all and so then I came around to Lili's point-of-view, that it was a lighting cue shocking us into 'The Darkness,' i.e an absence of light. I wish I could remember what line in the song it happened on. I wonder if it was something they were trying out for the effect? Aw, maybe not. But it was cool either way.
Top

astranger wrote: The Darkness -
i really wish an mp3 would surface

astranger, Your wish has been granted.

Allan Showalter (Dr HGuy) recently posted a fantastic analysis of LC's three new songs on his blog http://www.1heckofaguy.com. He provided an mp3 from each of the concerts. This is the link for The Darkness.

These are the rest of my St Louis videos. As I mentioned before, the camera view was difficult but the sound was gorgeous.

Happy New Year, everyone! I've finally gotten around to taking the pictures off my camera, so I thought I would share these photos that I took during the St. Louis concert. If anyone wants these pictures in their full size, send me a message and I can e-mail them too you. Enjoy! 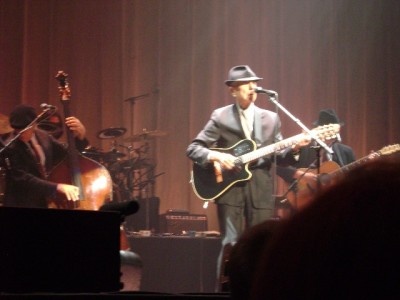 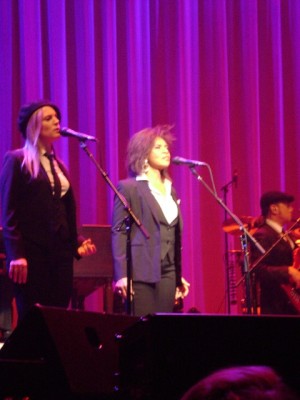 Another one of Leonard 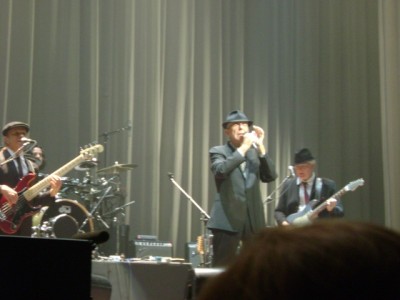