Bequia wrote:My understanding, perhaps mistaken as I am just a goy, is that this symbolizes that according to the Song of Songs, God "peeks through the cracks in the wall" (i.e., watches over and protects even when hidden)....the obvious connection is to Anthem

adamintelaviv wrote:Cohen ended the concert with the priestly blessing in (excellent) Hebrew. Being a descendant of the holy men of Israel (literally, that is what his name, Cohen, means) he has the power and the right to do this.

This blessing is one of the most beautiful ancient poems you will ever know.

I felt most blessed.

Here is my outrageously personal translation:

Here is something more precise:

I am wondering if this is something he has done before. I had the feeling it was a very special moment indeed.


I made some screen caps from MajorTom2oo1's video showing Leonard giving the priestly blessing. 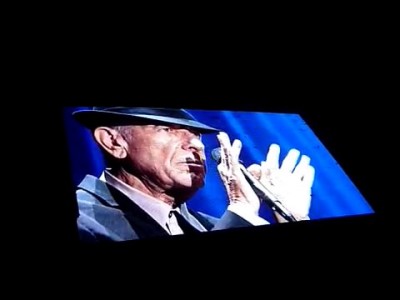 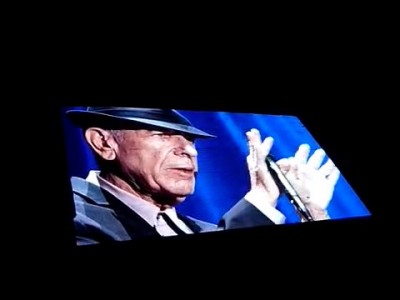 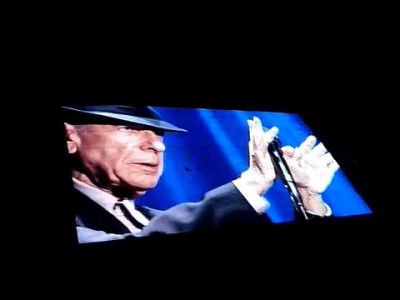 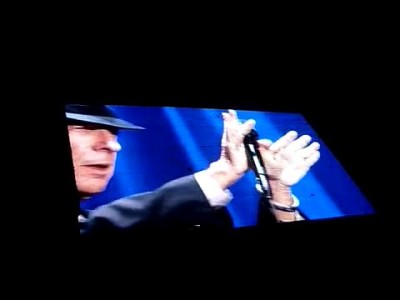 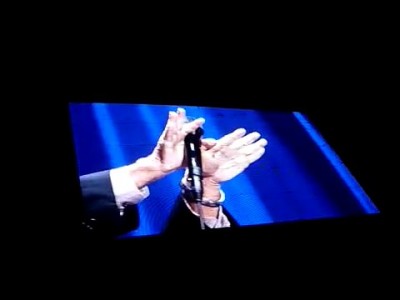 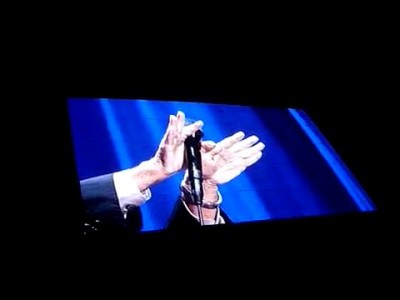 Here's a blog with many interesting references:

While perhaps not the most elegant or lyrical account of the Leonard Cohen Tel Aviv Concert, The High Priest, a post by Jerusalem Gypsy in the Jerusalem Wanderings blog may prove to be my favorite.

Jerusalem Gypsy, you see, admires Leonard Cohen and acknowledges that he is, indeed, The Man, but JG is not, as she points out, “a total fanatic.” And, although she seems confident of Cohen’s abilities, she is not willing to automatically cede her approval. She is attending the concert to watch Cohen perform, not to pay homage.

I also appreciate the details she provides about the setting and her admirably idiosyncratic responses to them. I’ve read reviews from the Jerusalem Post and Bloomberg.com, Cohen Defies Critics With Israeli Gig from The Independent, Yonat Frilling’s moving testimonial, and too many other descriptions and analyses of the Tel Aviv concert, but only Jerusalem Gypsy reports sacrificing the hot dog with sauerkraut to go she craved because she “decided [she would] rather starve than miss buses [to the concert].”

And certainly no other reviewer was willing to dedicate a paragraph to (justifiably, one perceives) defaming the bank that was willing to sponsor the concert and provide a gift bag to members of the audience but unwilling to refinance JG’s house loan.

This is a woman to whom I can relate. She is eager to attend the concert but she first has to finish her work because

The worst thing would be for me to come back to work on Tuesday, after the Yom Kippur vacation, to a mountain of shit on my desk.

Other folks, no doubt, are awaiting the start of the concert pondering the socio-political implications of Cohen’s show on the Israeli-Palestinian conflict or contemplating the subtle shift in the cosmic consciousness Cohen’s songs would trigger that night. Jerusalem Gypsy, however, is locked on exactly the same issue on which I would have focused:

My first thought, as the concert began, was – am I going to feel that the concert was worth the 800 shekels I spent? [emphasis mine]

All that makes Jerusalem Gypsy’s record of her concert experience splendidly personal and her reaction to the concert, especially to the blessings at the end of the performance more moving to me than the most exquisitely written reports from others.

I kept on telling everyone at work for the entire week that on Thursday I had a meeting with the Jewish High Priest – the Cohen Gadol, the Priest of Priests. I managed to snag an expensive ticket to Leonard Cohen’s performance last night and I was sure the High Priest would bless his audience. I thought about it for quite a number of days – about what a great idea that would be for him to give the priestly blessing to an audience of 47,000.

I was awash in day dreams throughout the day, wishing I was his spiritual tour guide while he was in the country. …

… although I really like Leonard Cohen’s music, I am not a total fanatic, I don’t know the words to all of his songs. …

We all got off [the bus at] the next stop and had about 25 minutes before the concert starts. Leonard is known for being punctual. When we finally got to the stadium, the lines in front of the gates were frightening. Hundreds of people had yet to get into their gate. No one seemed as frantic as I. I went over to gate 10. There was nobody at the gate. It must have been a gate of people who had all come early. The guy looked at my ticket to see if it was a forgery or if it was real. It was real. Thank God it was real because I didn’t want to have to kill the guy who sold it to me, which was fine, because I ended up sitting right next to him and his girlfriend.

The concert began one minute after I got to my seat. There was a Bank Discount green bag on my seat, and I thought for a moment that someone had taken my spot. But I saw those green bags everywhere. That’s the least that stupid bank can do. I tried for two years to get refinancing on a loan where they were charging me 12% interest. They wouldn’t hear of it. So I changed banks. But I’ll take the green insulated bag – thank you. Fuckers.

My first thoughts, as the concert began, was – am I going to feel that the concert was worth the 800 shekels I spent? For one, my seats were fabulous. I sat around 30 rows back and only 2 rows up from the floor. I saw the stage clearly, but if I wanted to see Leonard’s expressions, I had to look at the screen. The same guy who did Leonard’s poetry reading in Hebrew in Jerusalem, had his translations of the lyrics shown as subtitles on the screen. I hope he got to meet the Man for his efforts. The Jerusalem Post’s review mirrored the same emotions/reactions/feelings I had about this concert. I knew about 80% of his songs, and I sang along to the ones I knew. I took some photos (to be posted tomorrow) and one video. And I wondered how this man could get everything so perfect – from the simple stage backdrop of flowing chiffon-like curtains, using only different colored lighting for the stage, which didn’t annoy the crap out of me because the lighting changes were slow and elegant, just like the entire performance. Leonard’s voice was perfect. The band was incredible. He was incredible. The audience was great. Noisy when it had to be, yet when he spoke, you could hear a pin drop. Everything was incredible. So, yes, it was worth the fortune I spent.

I loved the version of Who By Fire (or is the song called “who shall I say is calling?”) – probably one of the evenings favorites of mine. The Spanish guitarist/lute player, or whatever that instrument is, was amazing. Cohen gave so many encores, I lost count. I felt tears running down my cheeks by the end.

We must have been on the same wavelength somehow, either that, or I am psychic as all hell, because at the very end, right before he left the stage, he stood at the microphone with his hands up the way Jewish priests bless the people, and Leonard Cohen, the High Priest, blessed the audience in Hebrew with the ancient priestly blessing – “May the Lord bless you and keep you. May the Lord let His face shine upon you and be gracious to you. May the Lord look kindly upon you and give you peace.”

And this is the video of that tear-evoking priestly blessing.
Leonard Cohen – Whither Thou Goest & Blessings (Tel Aviv, 9/24/2009)

looks like the links didn't come thru on my last, so here's where i stole it from:

Feel free to steal at will

gulp! never been caught that fast b4.

i'm a prof, and as we say, "If you steal from one person it's plagiarism, and if steal from many it's scholarship."
Top

of course, in this case, looks like you had already swiped it, so i guess i'm a thief once-removed, or else a second thief (never been able to understand the distinction between first cousin, once removed, and second cousin--if you understand it PLEASE do not explain it as it never sticks and just makes my head swim)
Top

My post contains excerpts from the Jerusalem Wanderings blog, but as I pointed out, the entire post is worth reading. It can be found at http://jerusalemgypsy.blogspot.com/2009 ... riest.html
Cohencentric http://Cohencentric.com
Top

jarkko wrote:First photos by Hen Altof from Tel Aviv on my website at http://cohen.1g.fi/kuvat/Ramat+Gan+Stad ... tof-19.jpg
Will create proper pages about Barcelona & Tel Aviv, but here is a beginning. The photo with all those green light sticks is amazing!

since thursday I have wanted to write some wise and wonderful words about the amazing concert in tel aviv but truly I have no words to describe the warm glow I feel thinking back to thursday evening...........my first time seeing the wonderful mr.cohen.....a present to myself for my 50th birthday ........being able to share the evening with my 18 yr old son.......a memory created that will never be forgotten.........

Thank you everyone for the wonderful and moving clips and accounts of the concert and a big big thankyou for this forum and the amazing people taking the time to run it.....without you I would not have got my tickets..........shana tova......

jarkko wrote:First photos by Hen Altof from Tel Aviv on my website at http://cohen.1g.fi/kuvat/Ramat+Gan+Stad ... tof-19.jpg
Will create proper pages about Barcelona & Tel Aviv, but here is a beginning. The photo with all those green light sticks is amazing!

Terrific photos. I particularly like altof-60, #51, the picture of Rob Hallet taking a well deserved bow to enthusiastic applause when LC introduced him.

Our executive from AEG who got me back on the road, Rob Hallett.

goldstei wrote:Leonard (understandly) looks awfully exhausted in the last one. The Webbs are radiant in #12.

This is true, and I didnt notice it in the show itself-
By this time, the crowd took over in a huge sing-along, that I guess masked the original LC in a sea of sounds.
As far as the audience was concerned- this could have gone on forever

Thank you for the link to Jerusalem Gypsy's wonderful post and blog. Enjoyed it immensely.

DrHGuy - I did read the entire "Jerusalem Gypsy" blog and particularly loved the paragraph about the bank. I could relate really well.

jarkko wrote:First photos by Hen Altof from Tel Aviv on my website at http://cohen.1g.fi/kuvat/Ramat+Gan+Stad ... tof-19.jpg
Will create proper pages about Barcelona & Tel Aviv, but here is a beginning. The photo with all those green light sticks is amazing!
Jarkko

Thanks for the pictures Jarkko. The one with the green candles is stunning. And - even though they invariably look the same, I always love those simple blue pictures of Leonard and his guitar. Leonard the troubadour.

I'm hoping Leonard, and his band members and singers, and entire entourage, are now enjoying being "home and happy."
Top
Post Reply
250 posts