Hello All,
I've read in a couple of Spanish newspaper that there has been a new date added to the tour.
It will be in the "Velódromo Lluis Puig" in Valencia September 18th.
The tickets are already being sold in the ticketmaster website:
http://www.ticketmaster.es/Leonard-Cohe ... _b_10001_5

I have not seen this announced in the official site, nor in the forum.
Good luck with the tickets!!!

This concert has been on the list since the very beginning, however with a note "Not to be announced". That's why I have never put it on my site.
I have now emailed AEG to ask for confirmation. Must be OK - ticketmaster.es would not sell it if it were not true.
1988, 1993: Helsinki||2008: Manchester|Oslo|London O2|Berlin|Helsinki|London RAH|| 2009: New York Beacon|Berlin|Venice|Barcelona|Las Vegas|San José||2010: Salzburg|Helsinki|Gent|Bratislava|Las Vegas|| 2012: Gent|Helsinki|Verona|| 2013: New York|Pula|Oslo|||
Top

I just booked tickets in the hope / expectation that it will be OK. I have to admit though - Valencia is a little bit further from Barcelona than I thought.

Now I just need to book another flight (I only found out my original flight to BCN arrives MUCH to late after I booked the concert tickets ...) change the car hire, find a suitable hotel, find another day off work from somewhere ...

My name is Wendy and I am a Cohen-oholic.

Bad news, Leonard got sick while singing bird on the wire, and the concert has been suspended. It appears to be a case of indigestion, Leonard wanted to resume the concert but it was finally cancelled.

Sorry for all you fans at Valencia, and let's hope this inconvenience does not affect the rest of the concerts.

I'm sorry to report Leonard felt dizzy and fainted after only a few songs tonight in Valencia, he was rushed to the hospital after a while and the gig was eventually cancelled about 30 minutes ago.

people waited for almost an hour until Javier Mas came out, announced the news and comforted the audience about Leonard's state, apparently it was all just a syncope, possibly the product of "indigestion"

most main spanish newspapers have the news up already:

ooops elsita beat me to the punch

I translate from "In my secret life" the Leonard Cohen Spanish forum, published tonight at 23:30 (Spanish time).

"During Bird on a wire, Leonard did not seem to to be likely and as soon as he ended the song he could not get up. They took him to the backstage. After a while length Mas and Beck went out to announce that the concert was suspended due to a Cohen stomach cramp."
2008 Paris. 2009 Barcelona. 2010 Marseille. 2012 Ghent. Verona. Barcelona. Lisbon. 2013 Antwerpen, Berlin, Pula.
Top

I am sorry for all you fans at Valencia, Javier Mas said the would try to finish the concert some other day.

I hope this does not affect the rest of the tour, it seems to be a case of indigestion.
Top

From what I understand he actually fainted during Bird on the wire?!!! Hmmm, and they say not to worry?!

Apparently he's being released from the Hospital. Dino said:


Being released already. No Problems, peoples.

Updated Friday 18/09/2009 22:06
The singer-songwriter Leonard Cohen, 75, has suffered a blackout Friday during development of the concert held at the Velodrome Luis Puig in Valencia. Apparently, a court is behind the faint digestion, which has obliged to suspend the action around 2250 hours.

Guitarist Javier Mas, who has accompanied the musician throughout the tour, has been entrusted to reassure the 6,000 spectators who filled the hall. The public has paid homage to their idol with a standing ovation.

The incident occurred when only half an hour had elapsed since he stepped on stage during the fourth song, 'Bird on the wire'. According to several witnesses, Cohen has lost his balance initially incorporated to grab an electric guitar. However, it has come to plow into the ground thanks to the help of showgirls.

The final collapse took place, however, moments later, when it seemed recovered from the first outbreak of fainting. Until then I had only played three themes of integrity, 'Dance Me to the End of Love', 'The Future' and 'Is not no cure for love'.

The health services were in the compound have responded immediately to the singer, who has moved to the backstage by several members of his team. For nearly 50 minutes, the public has waited patiently for news about Cohen.

The information has come at last voice of one of his guitarists, Javier Mas. Under the Aragonese musician, suffered a cut of digestion and vomiting, but their situation is not serious. After thanking the outpouring of support from the spectators Valencia has further expressed their desire to return to the city to complete its action. In the coming days might know the new date.

The Valencia was the ninth and penultimate concert of his tour in Spain, which ends on September 21 in Barcelona. Cohen came to the capital today after playing Turia Bilbao on Thursday. Previously visited León, Palma, Vigo, Girona, Madrid, Granada and Zaragoza.

Here is another little news report - from TypicallySpanish.com - nothing new really. 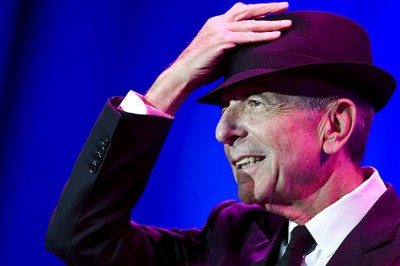 It happened during the fourth song of the night during a concert in Valencia.

The 74 year old was singing ‘Bird on a Wire’, the fourth song of the night at about 10,10pm, when he rapidly fell to the floor. He was carried off stage by members of the band and backstage crew. A statement saying that he would not be continuing was given to the crowd at 11pm. 20 minutos reports that a spokesman said he had a digestive problem, and although he was well the concert would not continue.

An ambulance had been called to the scene, but it appears the singer was atended to by medical staff inside the concert hall.
The concert was his penultimate one in his tour of Spain, which began on August 11 in León. He had just one more concert set for Barcelona on Monday.

Press reports say that he was obliged to tour because of his financial situation. Four years ago he accused his agent in a missing five million dollars.

Dear God, I hope he is allright now.
It must be really exhausting to be on the move for so long...
Get well soon, Leonard! We love you and wish you the best of health!

Were you there? What is your report...that is if you have an internet connection. I know you had a ticket to Valencia. Looking forward so much to hearing from you.