Awesome! Nice report and a whole bunch of videos. Thank you for the link. I took a chance and just sent a message to Didier, asking if he also filmed, by any chance, one certain song that's not on his blog

Aaaand -"The Partisan" captured, too! Thanks for the link!!

Btw it was me, the monkey-with-banana-'thrower' during the song 'I'm your man'. Hope Leonard did not get this wrong as he is on the cover of 'Im your man', the album...with a banana! 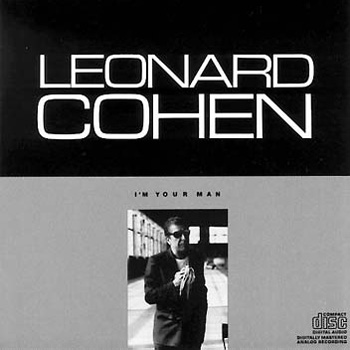 Well, I thought it WAS some kind of allusion to the I'm Your Man cover. Wasn't it?

Anyway, I do not think Leonard thought you wanted to insult him in any way. So, don't you worry.
Top

Yes, me too. Since you threw it while he was singing "I'm your man" I thought you meant to refer to the cover on purpose

Awesome! Nice report and a whole bunch of videos. Thank you for the link. I took a chance and just sent a message to Didier, asking if he also filmed, by any chance, one certain song that's not on his blog

Good for you - I thought about doing that - and then forgot. He quite possibly might have even a partial - and not realize the [cough] significance. Of course, it was the first video I searched for as I scrolled down his web blog.
Top

@sturgess66: Awwwww... I just received his reply. He didn't film it at all and what's even WORSE: Another video of "I'm your man" in brilliant quality and filmed from a great position popped just up on youtube. And guess what - it stops at the very second he takes a breath to start the line "If you want a boxer..."

I was so disappointed I almost threw my computer out of the window.

AAAH - STOP !! Just while I was typing this I received a message from the uploader of the cut video. I had asked him about the rest and just this second he confirmed that he has indeed filmed the rest. Yihaaaa

Good for you Pearlvoice. Looking forward to seeing it.

Meanwhile - I just found a bunch more from Colmar that have titles that made them hard to find. Maybe this is who you are referring to Pearlvoice? "I'm Your Man" is there - partial -

There are more - click on "More From: LECHIMful" to see them all.
Top

STURGESS66, Great job finding all these videos. Thanks, Linda for all your time and hard work.
And thanks for posting them for us all to enjoy.
2009-San Diego|Los Ang|Nashville|St Louis|Kansas City|LVegas|San Jose
2010-Gothenburg|Berlin|Ghentx2|Oaklandx2|Portland|LVegasx2
2012-Austinx2|Denver|Los Ang|Seattle|Portland
Arlene's Leonard Cohen Scrapbook http://onboogiestreet.blogspot.com
Top

Haha! Here it is Pearlvoice- it's sideways - but - what the heck. Just bend your head sideways. Or - turn your computer screen on it's side?

Glad you followed up and glad this person posted it.

Is that a monkey that arrives after the stethoscope? He already has the boxing gloves.
Top

sturgess66 wrote: Is that a monkey that arrives after the stethoscope? He already has the boxing gloves.

I also see monkey thrown at him -- he is amazing !! without skipping a beat he catches a monkey while singing, and this is after he was already supplied with gloves and stethoscope

@Sturgess66: I would've performed a headstand to see that video

Yes, the toy was was a little plush monkey holding a little plush banana. When he started singing "If you want a boxer..." the gloves came flying right on time. He was unbelievably fast to pick them up, then he held them up and put them over his shoulder ever so decoratively.Unfortunately that piece isn't captured in the video. Then, when he started singing "If you want a doctor..." the stethoscope landed directly in front of his feet. And again he was so incredibly fast to pick it up. Unfortunately in the video the light's too bright so we can't see his funny facial expression.