OK I am getting excited about tonight. Heading off on a long drive later today wearing my Hallelujah t-shirt (thanks Sophia

) and the daughter is wearing the Europe tour t-shirt (thanks Andrew) so if anyone spots us in the 7,000+ people give us a shout.

Hope everyone enjoys tonight, I know I will.

I know you and your daughter will really enjoy the concert, especially with those T shirts to wear!

You may well see my son Tim there also, though he won't have such a T shirt on. (I guess I could have loaned him one of mine, but knowing Tim, I'm sure he would have politely declined.)

We're looking forward to hearing how this (first ever LC winery concert?) goes and will rely on you or some other Forum friend to note the set list for us. It will be interesting to see if it varies in such a setting: for example, perhaps dropping the TKD recitation because of the inebriation related noise level (noting that gates open 3 hours before Leonard comes on).

Anybody able to post the setlist? First review from Melbourne Age:


Still plenty of life in this ladies' man

LEONARD Cohen is like a horse whisperer, only for women. Even at 74, the dapper rogue could provoke sighs from women in the audience at Rochford Winery last night with his courtly songs of sex and regret. When he growled his sleazy 1988 classic I'm Your Man, women leapt from their picnic blankets to yell: "Yes, you are!"

At his first Australian concert in 24 years, Cohen seduced 7000 people — women and men — with an act polished by a year's touring and a lifetime perfecting his pitch: he charmed us, he moved us, and then he broke it to us gently. "I tried to leave you," he sang at his third and final encore.

Cohen is a funny man. The jokes may be bleak but he tells them with a rueful smile. "It's been a long time, about 15 years since I was on stage," he told the crowd. "When I was 60, a young kid with a crazy dream."

He may look frail, but Cohen put paid to his morose reputation with a vibrant set that lasted almost three hours. He certainly didn't perform like a man forced out of retirement to sing for his pension fund. Dressed like a preacher in three-piece suit, string tie and fedora, he literally skipped on and off stage between sets, swung tight-fisted like Sinatra during musical interludes, and performed a "white man dance" to whooping applause.

Cohen's baritone is, as he cheerfully admits, a rough diamond. His martini-dry vocals are complemented by a nine-piece band of accomplished musicians and singers, led by his long-time musical director, bassist Roscoe Beck. Folk classics Suzanne and Chelsea Hotel #2 were presented simply, but many highlights came from more recent songs, such as the witty Everybody Knows, soaring Anthem and wry calling card Tower of Song (featuring Cohen's one-handed synthesiser solo!)

Hallelujah came halfway through the second set. Cohen fell to his knees to wrest his best-known song back from all the artists who have covered it — Jeff Buckley, Rufus Wainwright, UK Idol's Alexandra Burke — and rediscovered its wild, black heart. Later, Cohen ceded control of lovely hymn If It Be Your Will to the angelic voices of the Webb sisters. Then he roared back into focus with the song of the night, a rocking and timely rendition of his 1992 number Democracy Is Coming to the USA.

Encore 3
25. I Tried to Leave You
26. Wither Thou Goest
the art of longing’s over and it’s never coming back

as i wrote to my waits forumers:

i have never been more moved by a concert or an artist than i was last night!! Leonard is amazing - he is gracious, warm, funny, humble and an incredible presence. i am in awe of what i experienced last night, and when i was reading other peoples accounts prior to last night saying it felt like a religious experience for them i was cynical and scoffing at them in my head.... i have to eat my words, or scoff rather and admit that it was incredibly moving and emotionally so charged it did feel religious at times without meaning to sound wanky.. i am SO HAPPY and so much richer for having been there last night i cannot describe it and do it justice. i cant wipe the smile off of my face.... it literally moved me to tears ...

so happy, so so SO happy

he is just a beautiful man ... just beautiful.

can i post images here, as in upload them straight from my desktop? does anyone know?
"It's strange. You never start out life with the intention of
becoming a bankrupt or an alcoholic or a cheat and a thief.
Or a liar." -- Raymond Carver
Top

Re: AUSTRALIA AND NEW ZEALAND

i was so moved im also going to the show on the 5th and the 10th!

Hello Ania, what you saw and heard last night together with all of us who were there was so special almost spiritual, i have loved Leonard's work for well over 40 years and he still brings tears of joy and hope to me, he is so much more than just an entertainer, i can't find the words to describe him that would do true justice to this wonderful human being; I am now in my 60th year and I was so happy to see all of those members of the younger generations totally in awe of this saintly man, regards, Big Rabbie
Top

Ania, I'm so happy you have had that experience - it's great to hear how it transpired for you!

My son Tim (who is not as big a fan as his father) said it was great and was struck by how happy Leonard seemed!

(He said his only slight bit of doubt about this public presentation related to Leonard's 'In My Secret Life' lyrics: " I smile when I'm angry, I cheat and I lie..."

, but ultimately I think he was convinced!

ania wrote: can i post images here, as in upload them straight from my desktop? does anyone know?

Yes you can! Just click the upload attachment tab next to the options tab below where you edit the text.

I'm delighted you were thrilled and so moved. The postings over the last half year have almost led me to expect to be deeply moved when I'm at the Brisbane show in a week's time.

oh crap i just tried uploading the pics i uploaded to the tom waits forum but it says theyre too big!

bugger bum! and im not home im using a friends pooter and im not sure he has the kind of software i need ot resize them!
"It's strange. You never start out life with the intention of
becoming a bankrupt or an alcoholic or a cheat and a thief.
Or a liar." -- Raymond Carver
Top

ok lets try this again. sorry about the quality - taken on my phone.... eh better than nothing 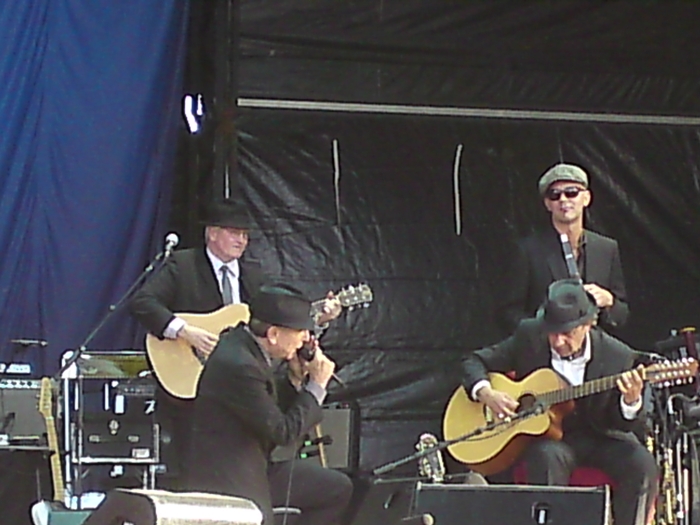 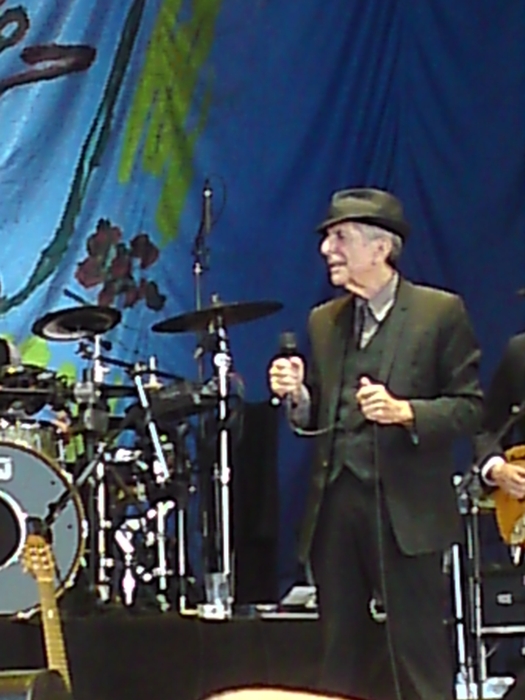 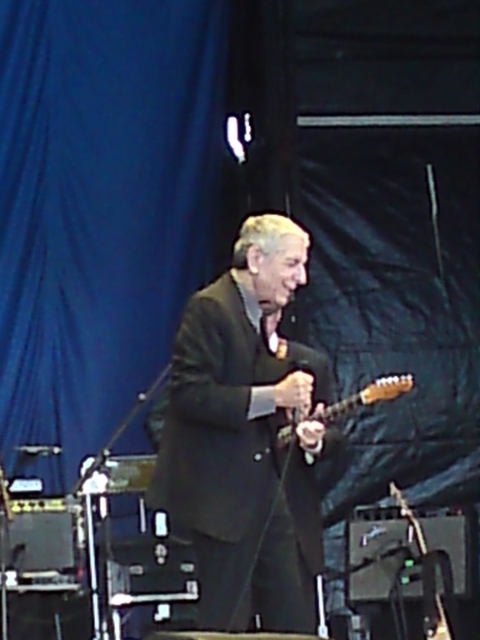 I have been waiting patiently for someone to post something about the concert ‘across the ditch’.
Your confession made me smile….at least you are honest!
You’re probably wearing the same smile I am. It just won’t leave me. Not that I want it to.

I’ve calculated that Leonard must have given 88 concerts by now…yet when I saw him everything was as fresh and full of life, as if it were his first. He just seems to go from strength to strength. Those fortunate enough to be still waiting to see him are surely going to be blessed.

Thank you so much also for posting those wonderful photos. Ahhh, it does my heart glad to see them!

He's the Man . Age has no barriers to undiluted sex appeal . We all loved him and in reply to someone's actual call from the throngs " We love you leonard " in a voice smooth and warm " and I am very fond of you too"
We felt like we were in the presence of a master , he lead us throught the evening and we lovingly followed, just like we have over the years touched by the words , entranced by the music .
I just wished i could have told him thank you
hello
Top

I'm sure you all enjoyed the concert!

Oh, wasn't it wonderful?
I jotted all the songs down, but was later given a band-member's set-list, with some notes. I've included them below. There is also a list of ten songs at the side that they didn't play... maybe we didn't shout hard enough for an encore...

On a personal note... I wore my own beloved fedora - and had the bright idea of giving it to our man in the hat by way of a thank-you gesture. I pinned a note to it, and persuaded the security guys to place it on stage, from which the sound guy later whisked it out of sight... from there I lost sight of it, and can't banish the thought that it probably never reached its intended destination, but was scooped into the bin with all the debris at the end of the show!... ah well, it was worth a try!

Here's the set list for which I seem to have swapped my hat:

Dance Me to the End of Love
The Future
Ain't no Cure for Love
Bird on The Wire
Everybody Knows
In My Secret Life
Who By Fire
Chelsea Hotel
Hey That's No Way
(Sisters of Mercy)... that's how it's listed in the set-list, but they didn't play it, alas.
Anthem
----(small bow)-----
Tower of Song
Suzanne
The Gypsy's Wife
The Partisan
Boogie Street
Hallelujah
I'm Your Man
POEM .... (as written. It was 'TKD' - we were sober enough, thank-you, Andrew!)
Take This Waltz
----(full bow)----
So Long Marianne
First We Take Manhattan
----(small bow)----
Famous Blue Raincoat
If It Be Your Will
Democracy
----(small bow)-----
I Tried to Leave You
----(full bow)----
Wither Thou goest
Top
Post Reply
49 posts