Canada Post has honoured the late, legendary singer, songwriter and Montrealer Leonard Cohen with a new set of stamps, and has done so on what would have been Cohen's 85th birthday: Saturday, Sept. 21, 2019.

Four million Cohen stamps were printed, and they will only be available for a two-year period. Limited edition collectibles were also announced on the same day.

Stamps for domestic use 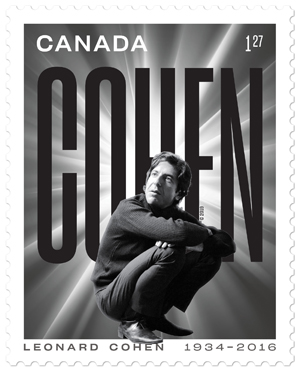 Stamp for letters to USA 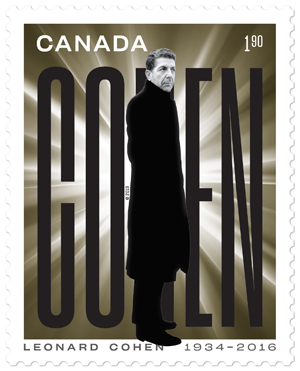 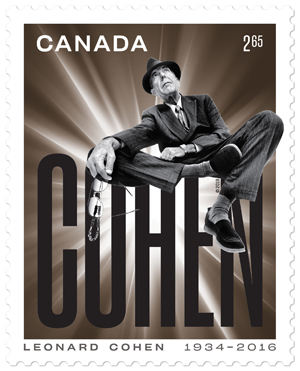 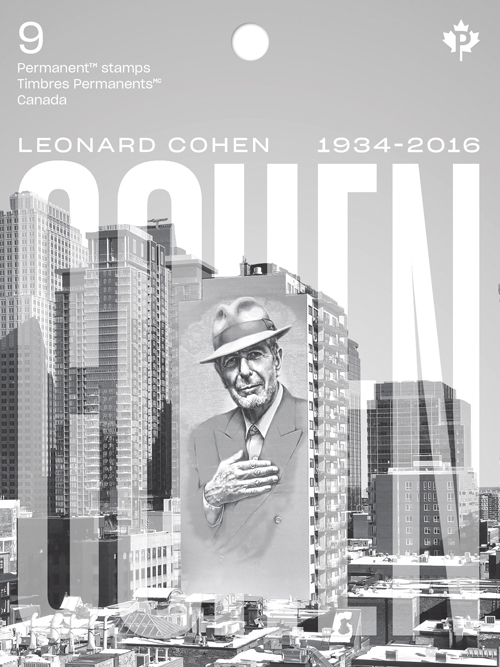 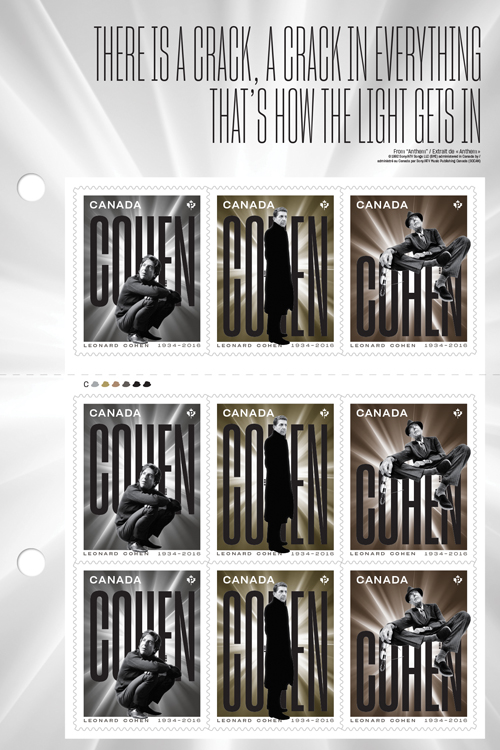 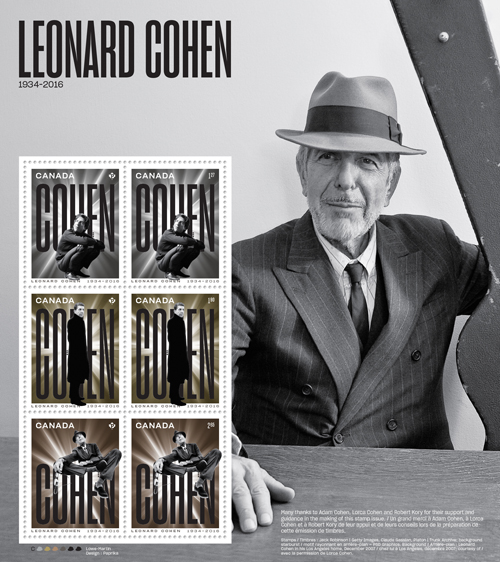 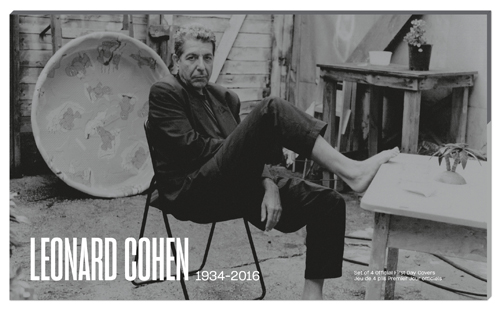 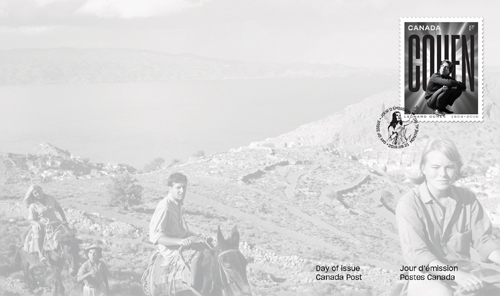 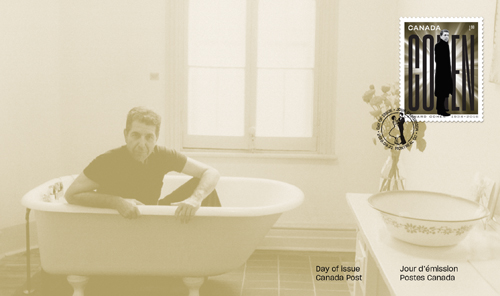 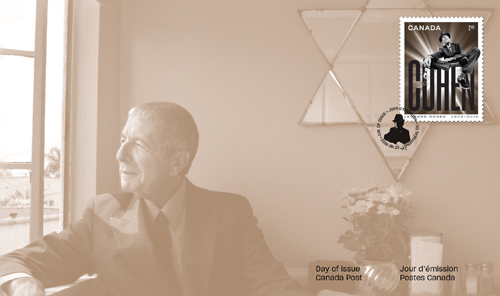 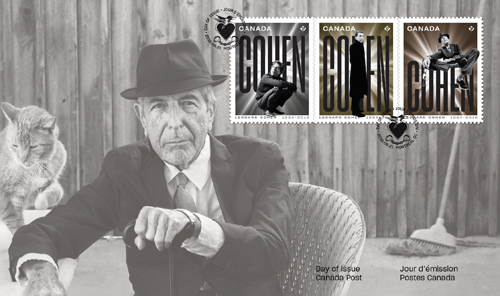 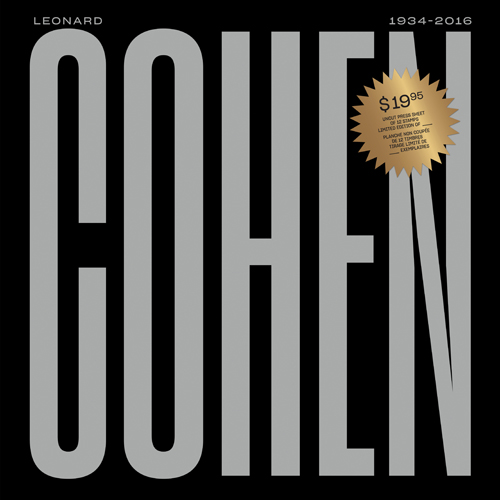 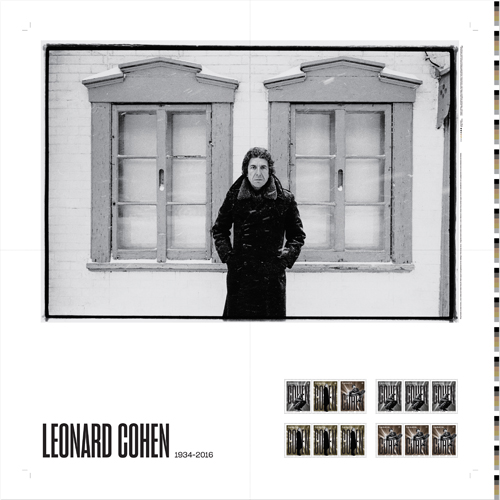 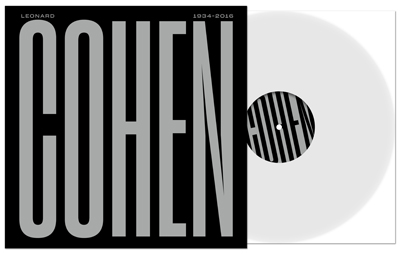 The folded uncut press sheet is sold packaged in a simulated liner and album cover, inspired by Cohen's many recordings.

Other collectibles: three framed enlargements of the stamps, and a framed commemorative pane. 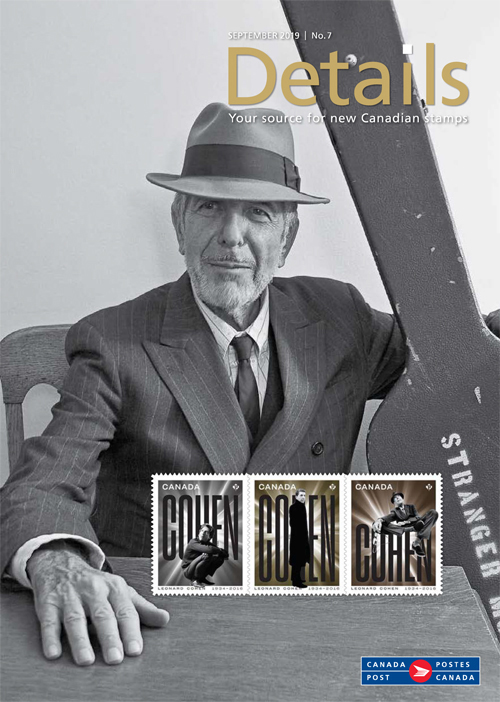 Read the Leonard Cohen pages of the Details Magazine here: https://www.leonardcohenfiles.com/CP-detailsmag.pdf
You will find all prices on these pages!

How to buy the stamps and other collectibles:
In Canada and USA best to call 1-800-565-4362
Around the world or for any online shopper of as of Sept. 20 at 5:30 pm Eastern time visit out online store at https://www.canadapost.ca/cohenstamps
This will bring straight in to all Cohen material.

Was anyone (from Europe) able to buy stamps yet? I had added the items to my shopping cart and after creating an account and signing in, all I get is a blank webpage... So I used another browser which worked fine until I signed in again: blank again. Third browser: same problem...

Was anyone (from Europe) able to buy stamps yet? I had added the items to my shopping cart and after creating an account and signing in, all I get is a blank webpage... So I used another browser which worked fine until I signed in again: blank again. Third browser: same problem...

Anyone else experiencing the same problem?
Maarten

I just placed an order and it worked fine fore me. Used Safari as browser and also used “Guest check out “ option, so without registration. Have received Payment and order confirmation .
Lille 2010, Dublin 2012, Mannheim 2013, Rotterdam 2013, Montréal 2017
Happiness is just the side effect of a meaningful life.
Top

I was able to order mine here in Oregon!
Poor Dave (my husband)... he doesn't even try to talk me out of anything 'Leonard' anymore, lol!

Thanks for the help!
Whenever I wanted to sign into the account I made, their website seemed to get stuck. But I just ordered stamps using the guest check out like you suggested and that worked fine. I missed that option the first time around, I guess...

Thanks Jarkko for the cool video.
Does anyone know if these trucks are all across Canada or only in Montreal at the moment.
Going up to Vancouver in a few days and would love to see one up close and personal.
Leslie

mutti wrote: ↑
Mon Sep 23, 2019 10:19 pm
Thanks Jarkko for the cool video.
Does anyone know if these trucks are all across Canada or only in Montreal at the moment.
Going up to Vancouver in a few days and would love to see one up close and personal.
Leslie

The trucks in Edmonton (at least, the one's I've seen) are just the usual red, white and blue. My local post office doesn't even have the stamps yet! I may have to order them online...

jarkko wrote: ↑
Mon Sep 23, 2019 7:43 pm
this is a video showing the process of wrapping Canada Post vans with the Leonard Cohen stamps:
https://youtu.be/vEcmUtUjwN4

mutti wrote: ↑
Mon Sep 23, 2019 10:19 pm
Thanks Jarkko for the cool video.
Does anyone know if these trucks are all across Canada or only in Montreal at the moment.
Going up to Vancouver in a few days and would love to see one up close and personal.
Leslie

I read the Montreal Blog last night. The wording suggested that there was only one van. Hope I’m wrong.


I LOVE IT!! THE FIRST STAMP IS AN IMAGE OF LEONARD COHEN FROM THE 1988 MUSIC VIDEO FOR FIRST WE TAKE MANHATTAN

Some interest in vans, I see. There is one in each of the downtown cores, Montreal, Toronto and Vancouver.

Lit by angled late-afternoon sunlight, the room pulsed with energy and anticipation as more than 200 people gathered, including his old friends, and the masterful songwriter’s “Closing Time” pulsed on the sound system.
They’d come to be the first to see the gorgeous stamps honour the late Leonard Cohen.

In a sense, they also came to be with him again, to be in the presence of his melodies, his lyrics, his voice, his soul.

The stamps were unveiled Friday, September 20, 2019, in the Glass Court at the Montréal Museum of Fine Arts, in the city of his birth, overlooking the Leonard Cohen mural that rises 21 storeys above Crescent Street.
Glancing from the stage to the mural outside, singer Michel Rivard joked, “It’s very awkward” singing under the watchful gaze of the master himself. Still, his rendition of “Dance me to the End of Love” was flawless and poignant.

Leonard Cohen was in the room in so many senses. A short biographical documentary video played for several minutes, during which no one uttered a word. A man who passed away in 2016 still had the power to hold an audience spellbound.

“That gave me the shivers,” said emcee André Ménard, an old friend of Cohen’s, and co-founder and artistic director of the Montréal International Jazz Festival.

Cohen, said Ménard, recorded 14 studio albums and “his average for classic songs per album is, I think, unmatched in pop music.”

On the same day, Cohen’s record label, Sony Music, announced the release of new music from Cohen, and a forthcoming album release titled “Thanks for the Dance.” The next day would have been his 85th birthday. The stamp launch event was the world premiere of the video of the song, “The Goal.” It too put Cohen in the room, with his baritone and his sketches and scrawled notes from his notebooks.

Cohen’s songs distilled the desire and pain of romantic love and explored the darkness and light of the human experience. The images on the stamps and the Official First Day Covers highlight three periods of his music career:

his impressive debut in the 1960s, including two songs that became enduring favourites, “Suzanne” and “So Long, Marianne”;

the resurgence of his popularity in the 1980s and the early 1990s, with his unforgettable and oft-covered “Hallelujah” (1984). It has been recorded by more than 200 established artists, and Maclean’s magazine called it “the closest thing pop music has to a sacred text”;

and his performances on an 18-month world tour he undertook in his seventies, followed by a final burst of creative genius.

Cohen’s place in the pantheon of the world’s great songwriters is secure. In Canada, he earned a Governor General’s Performing Arts Award for Lifetime Artistic Achievement, and was made a member of the Order of Canada and later elevated to a Companion of the Order of Canada. In the U.S., he was awarded a Grammy Lifetime Achievement Award. He was inducted into several music halls of fame.

When he died, countless singers, musicians and others publicly mourned his passing, expressing their respect for his work and their deep affection for him. They included Bob Dylan, Elton John, Bruce Cockburn, Clive Davis, Cat Stevens and Judy Collins. Leading papers around the world, including the New York Times and Britain’s The Guardian, published lengthy obituaries.

Cohen referred to his gifts with humility.

“I always thought of myself as a competent minor poet – I know who I’m up against. You’re up against Dante and Shakespeare, Isaiah, King David, Homer. I do my job OK,” he told Jeffrey Brown of PBS in 2006.

In 2011, accepting Spain’s Prince of Asturias Award, a distinction previously conferred on the playwright Arthur Miller, Dylan and Margaret Atwood, Cohen said, “Poetry comes from a place I do not command or conquer. If I knew where the good songs came from, I’d go there more often.”

He used that last line often – and when he went to that place, Cohen said he “had to sweat over every word…I’m very slow.”

In 2016, a month after the release of his critically acclaimed album You Want It Darker, Cohen died at 82. He was posthumously awarded JUNO and Grammy awards.

The Permanent domestic-rate stamps, designed by Paprika of Montréal, are available in a book of nine, with three of each design. Other collectibles, including a four-pack of Official First Day Covers, a collectible pane and a folded uncut press sheet packaged in a simulated album cover and liner, are available at selected post offices or at https://www.canadapost.ca/shop

The stamps and related products were two years in the making. Canada Post worked very closely with the Cohen family and estate to choose an approach, designs, images and texts that reflected and honoured an individual of Cohen’s global stature.

“It was an intense collaboration,” said Jessica McDonald, Chair of the Board of Directors of Canada Post, who helped to unveil the stamps.

Artist Gene Pendon, who led the painting of the 21-storey Cohen mural, posed for photos with banners displaying the Cohen stamps, and his famous mural in the background. He was beaming.

“We’ve been waiting to see the Cohen story told through Canada Post,” he said. “And it was great. There are so many ways Canada needs to tell its story and Canada Post is doing its part.”

If anyone has not received any LC stamps & would like me to mail you one from Montreal, you can send me a pm.
"There is a crack in everything, that's how the light gets in"
Top
Post Reply
24 posts