Is Leonard on SiriusXM's Tom Morello's "One Man Revolution" tomorrow?

Is Leonard on SiriusXM's Tom Morello's "One Man Revolution" tomorrow?

Hi!,
My husband, Dave, listens to the Lithium channel on SiriusXM (okay, I confess I listen too, lol!), and he told me yesterday that out of the blue he heard "So You Want It Darker", and today he heard that Tom Morello (Rage Against the Machine) might be discussing Leonard on his One Man Rvolution show tomorrow. If you go on the SiriusXM site and look at Lithium's lineup, it says that Morello's show will be about "darker songwriters & lyrics".
Can anyone confirm if this will include Leonard??
Thanks!
Vickie
Top

I was at work, so I wasn't able to listen and see if Tom Morello talked about Leonard or not. I am guessing not.
If anyone knew it about it, it would be someone here.
Thanks anyway!
Vickie
Top

vlcoats wrote: ↑
Thu Sep 12, 2019 5:24 am
If you go on the SiriusXM site and look at Lithium's lineup, it says that Morello's show will be about "darker songwriters & lyrics".
Can anyone confirm if this will include Leonard??

But that programme is listed as being on two separate times in September on Sat 14 and Sunday 15 so maybe you can still listen to it - https://www.siriusxm.com/lithium/weekly ... c_NA_NA_NA# 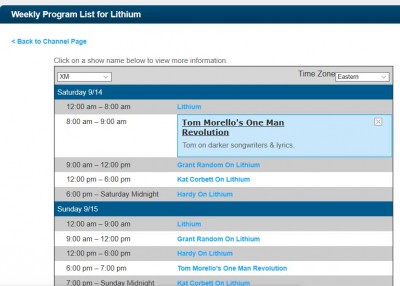 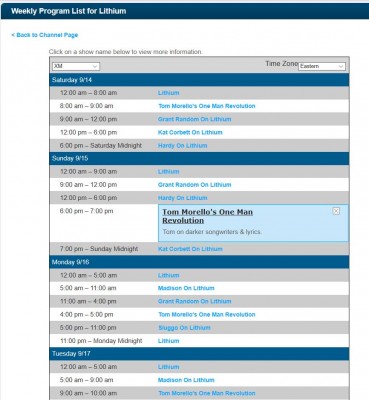 Good luck!
It doesn't have to be perfect, it just has to B4real ~ me
Attitude is a self-fulfilling prophecy ~ me ...... The magic of art is the truth of its lies ~ me ...... Only left-handers are in their right mind!
Top

Always good to hear from you! Thank you! I discovered that I could play episodes on demand with the SiriusXM app! I was able to catch the episode and YES, Leonard was on there!

In his shows, Tom Morello focuses on all kinds of music that influenced him as the guitarist for Rage Against the Machine and Audioslave. This episode featured darker songwriters and lyrics, and Leonard was in good company with bands like Nirvana and Led Zepplin. A couple of my favorite songs, besides Leonard's of course, were "The Mountain " by Steve Earl and "Song for Zula" by Phosphorescent which had some really cool string instruments you might appreciate, B4! This episode also had more 'headbanger'-type music like Nice Inch Nails and Pearl Jam.

When he got to Leonard, Tom introduced him by talking about how Leonard's voice was somewhat like his own, calling it a "rich, milk chocolate" voice. He said that in his eyes, Leonard Cohen and Bob Dylan were the top lyricists ever. When it was time to introduce the song he would play (You Want It Darker), he called it "chilling, beautiful, and dark" and said that in it, Leonard was "staring death in the face with a knowing smile".

It is always fun to stumble across Leonard unexpectedly. I will always be grateful to SiriusXM for the show they played shortly after Leonard died where they talked about his influence, his music, and everything else. I heard it by accident on a roadtrip to Montana, and it was the slap in the face I needed to do the thing that had been in the back of my mind for years, and finally check out this Mr. Cohen for myself! It has lead me here to the forum and then to Montreal, to Hydra, and to a tiny town in the South of France, and has opened my eyes forever!

Vickie, it’s good to catch up with you!
Glad you were able to listen to the programme. Nice to hear what Tom said about Leonard. I watched videos of those two songs you mentioned and I can see why he chose them. As you have already surmised, I do prefer the string one

btw - if you want to discover some more descriptions about Leonard's voice, read here how another Tom describes it - https://www.leonardcohenforum.com/viewt ... =5&t=21564