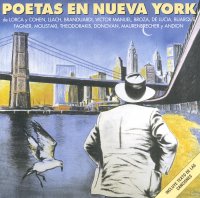 It was there that Leonard originally released his beautiful adaptation
of Lorca's poem "Pequeño vals vienés" ("Little Viennese Waltz")
www.youtube.com/watch?v=JQm1OmLMNno

and where Mikis Theodorakis released an adaptation on Lorca's poem "Son de negros en Cuba",
that later became known in Greece as "Santiago".

The original version in the Lorca tribute album was with George Moustaki
www.youtube.com/watch?time_continue=194&v=epbOVs-BJMQ

but a newer version with Thanasis Moraitis is I think one of the best by Theodorakis:
www.youtube.com/watch?v=lvhrPNUuVA0


Of course the two of them met again in the lines of Leonard's poem:

My Mother Asleep
From Book Of Longing

Re: In memoriam: When Leonard Cohen "met" Mikis Theodorakis