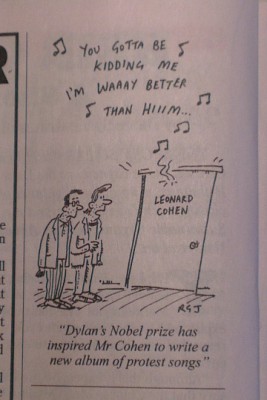 Leonard's your man: Surely Cohen is as worthy of a Nobel Prize as Dylan?

Friends, there is an online radio-station; dylanradio.com; fans can ask for tunes there.
Yesterday it was - completely unusal - all Leonhard Cohen´s songs.
The "Lenny-effect"?
Which makes people humble&modest&and more tolerant ?
may the peace ..
1970s "Beautiful Loosers"; 1980s "Poems of ..."
UH Tour: Oslo-Copenhagen-Cologne; Odense; OI-Tour:Ghent-Odense
Top

Here are a couple more articles calling this decision into question:

Cheers,
Andrew D.
'I cannot give the reasons
I only sing the tunes
The sadness of the seasons
The madness of the moons'
~ Mervyn Peake ~
Top

I can't possibly know of course but I think that Dylan would have been find with Leonard getting this recognition, just as it seemed Leonard was when Dylan was awarded the prize. There was more a sense of mutual respect than competition.
It's good that Dylan made his extensive comments about Leonard while he was still alive


Dylan, who is seventy-five, doesn’t often play the role of music critic, but he proved eager to discuss Leonard Cohen. I put a series of questions to him about Number 1, and he answered in a detailed, critical way—nothing cryptic or elusive.

“When people talk about Leonard, they fail to mention his melodies, which to me, along with his lyrics, are his greatest genius,” Dylan said. “Even the counterpoint lines—they give a celestial character and melodic lift to every one of his songs. As far as I know, no one else comes close to this in modern music. Even the simplest song, like ‘The Law,’ which is structured on two fundamental chords, has counterpoint lines that are essential, and anybody who even thinks about doing this song and loves the lyrics would have to build around the counterpoint lines.


“His gift or genius is in his connection to the music of the spheres,” Dylan went on. “In the song ‘Sisters of Mercy,’ for instance, the verses are four elemental lines which change and move at predictable intervals . . . but the tune is anything but predictable. The song just comes in and states a fact. And after that anything can happen and it does, and Leonard allows it to happen. His tone is far from condescending or mocking. He is a tough-minded lover who doesn’t recognize the brush-off. Leonard’s always above it all. ‘Sisters of Mercy’ is verse after verse of four distinctive lines, in perfect meter, with no chorus, quivering with drama. The first line begins in a minor key. The second line goes from minor to major and steps up, and changes melody and variation. The third line steps up even higher than that to a different degree, and then the fourth line comes back to the beginning. This is a deceptively unusual musical theme, with or without lyrics. But it’s so subtle a listener doesn’t realize he’s been taken on a musical journey and dropped off somewhere, with or without lyrics.”

In the late eighties, Dylan performed “Hallelujah” on the road as a roughshod blues with a sly, ascending chorus. His version sounds less like the prettified Jeff Buckley version than like a work by John Lee Hooker. “That song ‘Hallelujah’ has resonance for me,” Dylan said. “There again, it’s a beautifully constructed melody that steps up, evolves, and slips back, all in quick time. But this song has a connective chorus, which when it comes in has a power all of its own. The ‘secret chord’ and the point-blank I-know-you-better-than-you-know-yourself aspect of the song has plenty of resonance for me.”

I asked Dylan whether he preferred Cohen’s later work, so colored with intimations of the end. “I like all of Leonard’s songs, early or late,” he said. “ ‘Going Home,’ ‘Show Me the Place,’ ‘The Darkness.’ These are all great songs, deep and truthful as ever and multidimensional, surprisingly melodic, and they make you think and feel. I like some of his later songs even better than his early ones. Yet there’s a simplicity to his early ones that I like, too.”

Dylan defended Cohen against the familiar critical reproach that his is music to slit your wrists by. He compared him to the Russian Jewish immigrant who wrote “Easter Parade.” “I see no disenchantment in Leonard’s lyrics at all,” Dylan said. “There’s always a direct sentiment, as if he’s holding a conversation and telling you something, him doing all the talking, but the listener keeps listening. He’s very much a descendant of Irving Berlin, maybe the only songwriter in modern history that Leonard can be directly related to. Berlin’s songs did the same thing. Berlin was also connected to some kind of celestial sphere. And, like Leonard, he probably had no classical-music training, either. Both of them just hear melodies that most of us can only strive for. Berlin’s lyrics also fell into place and consisted of half lines, full lines at surprising intervals, using simple elongated words. Both Leonard and Berlin are incredibly crafty. Leonard particularly uses chord progressions that seem classical in shape. He is a much more savvy musician than you’d think.”
Leonard's work resonates
Brighton 1979; Dublin , Manchester june 2008; glasgow, manchester Nov 2008; Liverpool july 2009 ; Barcelona Sept 2009 ;marseille, lille september2010: Ghent August 2012;Barcelona October 2012;Montreal x2 November 2012: 2013; Saint John NB April 2013; Brussels June 2013;Manchester August 2013; Leeds , Birmingham September 2013; Amsterdam September 2013
Top

Just been announced that Dylan has decided not to attend the ceremony.
Not a surprise but a disappointment.

My contribution can be read/seen on this youtube page:

It's Official: Bob Dylan Not Going to Sweden for Nobel Ceremony (But Prize Is Still His)

Bob Dylan was absent at the nobel ceremony , but sent a pretty good speech which was read out by the US anbassador to Sweden.

Did the singer-songwriter take portions of his Nobel lecture from SparkNotes?
by Andrea Pitzer @ Slate
http://www.slate.com/articles/arts/cult ... cture.html


78 sentences appear in the Moby-Dick portion of Dylan's talk.
At least 20 sentences bear some similarity to passages from SparkNotes.
(...)
It's worth mentioning that Dylan turned in his lecture just before the six-month deadline, ensuring that he would get paid.

I am very sorry that I could only get hold of sparce fragments of the consultations by the Nobel committee leading to the prize for literature 2016:
„The prize is no more valued as it was.“
„Only some elderly bibliophiles.“
„We lost the youth.“
„The youth don´t read anyway.“
„Pop music. The youth is on pop music.“
„We need to find a musician, who is a writer as well.“
„Leonard Cohen published two novels and several volumes of poetry.“
„Leonard Cohen.“
That´s why they asked then 81-years-old Leonard Cohen in order to win the youth. Leonard Cohen accepted modestly and honoured, but pointed out that his health would not allow him to come to Stockholm. This crossed with the committee´s wish for greater public attention. In search for another singer they then gave the prize to Bob Dylan - who neither showed up at the award ceremony.

Ha, Harald, that brought a smile to my dial!

This is a little late as it was Dylan's birthday 3 days ago but seeing as we are speaking about Dylan and LC's words, there is no time limit: https://americansongwriter.com/many-artists-on-dylan/
by Paul Zollo 24 May 2020


Leonard Cohen: At a certain point, when the Jews were first commanded to raise an altar, the commandment was on unhewn stone. Apparently, the god that wanted that particular altar didn’t want slick, didn’t want smooth. He wanted an unhewn stone placed on another unhewn stone. Maybe you then go looking for stones that fit. …Now I think that Dylan has lines, hundreds of great lines, that have the feel of unhewn stone. But they really fit in there. But they’re not smoothed out. It’s inspired but not polished. That is not to say he doesn’t have lyrics of great polish. That kind of genius can manifest all the forms and all the styles.

It doesn't have to be perfect, it just has to B4real ~ me
Attitude is a self-fulfilling prophecy ~ me ...... The magic of art is the truth of its lies ~ me ...... Only left-handers are in their right mind!
Top
Post Reply
43 posts