Rest in Peace Marianne
I have been a Leonard Cohen fan for 28 years feel free to email me if you wish to keep in touch!
Top

Leonard Cohen’s muse Marianne Ihlen whom he wrote about in So Long, Marianne and Bird on a Wire, died in Norway on 29 July, aged 81. Neil McCormick is Telegraph chief music critic – he has interviewed Leonard Cohen. Anita Sethi is an arts critic.

PLEASE NOTE: during the interview, the text of Leonard's letter to Marianne shortly before her death is read out. If you would rather not hear this, please do not click on the link.
Last edited by christineanne on Mon Aug 08, 2016 2:12 pm, edited 1 time in total.
Top

I am not entirely sure if it's breaking too much privacy, but as it's been in a UK national paper, the text is out, anyway. If you feel you rather would not read what Leonard wrote to Marianne, don't click the link.
Apart from the privacy issue, this is really a very moving article.

Hello Pe Gu and thank you for your post.

I too considered the privacy issue - in fact, I'm not sure the text should have been made public at all - but as I had already heard the text quoted in posts on this topic, I decided to include the link anyway.

However, it was not clear from my post (above) that the letter was quoted during the interview so I have edited the entry to include that information in case people would rather not hear it.

I hope this helps.

Our deepest condolence to the family and friends of Marianne.

We are deeply touched by her passing away .

today she would have been 84.

i have been asked for a translation:
"our beloved marianne christine stang ihlen born 18 may 1935, died peacefully after a short illness. jan (husband) axel (son) then follows closest family members. funeral at the new chapel, vestre cemetery friday 5th august 2016 at 2.30pm. marianne requested no flowers at the ceremony."
Top

message received from j.s.:
>Shouldn’t it be Ihlen (her maiden name) Stang (her married name) or are names listed differently in Norway?
-----------------
good point! norway does not believe marriage reduces a woman to her husband's property, and she can therefore choose whether or not she wishes to obediently fall under his name. i, for one, found him to be a very decent gentleman. jarkko was with me when i last saw them, and i am sure he would say the same. she gave me this business card, which makes no mention of her married name; the address here crossed out because family still occupy the home 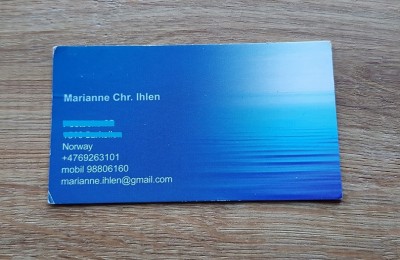 by the way, in norway 'marianne' is pronounced 'marry-anneh', four syllables - because the 'e' is not silent. leonard, in his song 'so long, marianne' incorrectly pronounced her name 'marian' (only three syllables instead of four). well, maybe he knew it was wrong, but thought it sounded better, like when dylan wrote a song to joan baez. i am sure you would agree that 'visions of johanna' sounds so much better than 'visions of joan'.

well, i have to go again now. my hosts are calling me for breakfast. afterwards we are going horse riding in this beautiful weather - on the island of gurskøy

Transcription: This song is called "So Long, Marianne" A girl called Marianne that I know very well, she came to me after I sang it for her first and she said, she's a Norwegian, she said, "I'm certainly glad the song wasn't written for me." I said, "Oh yeah?" And she said, "Yeah, cause my name is 'Marry-anneh'."

Here is the link to the auction page - a total of 64 or so items being sold, presumably by Marianne's heir(s):

Wow, I have been reading a lot of the letters that are up for auction. They are very private letters from LC to Marianne and it feels as a intrusion and almost inappropriate reading these. But still I couldn’t resist.....