Dominique Boile found this link on Amazon Canada: http://www.amazon.ca/Bird-Wire-Special- ... nard+Cohen
According to Amazon.ca, this edition will be released on April 8.

I checked the UK shop of Amazon, and it gives us more details:

Tony Palmer directs this film documenting Leonard Cohen's 1972 'Bird On a Wire' tour. The 20-city European tour, which began in Dublin on 18 March 1972 and ended on 21 April in Jerusalem, caught Cohen at the pinnacle of his career despite the concerts being plagued by technical and personal problems. Palmer splices Vietnam War footage and home movies from Cohen's childhood into the performance footage, creating a powerful testament to the singer's unique fusion of poetry and politics

Is this the same version as the Original version from Bird On The Wire by Tony Palmer? Will it be available in the United States?
Thank you Jarkko. Have a nice Day. (Evening) smile.h

****disc 1 is the same, the new bonus disc 2 has a selection of Leonard's childhood home movies.
I am sure all Amazon shops are going to sell it. / Jarkko***
Top

Here's the cover, direct from Tony Palmer and with his permission. 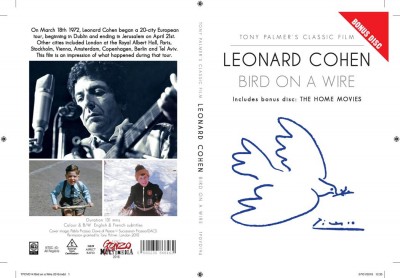 The brilliant poet, novelist, musician and singer-songwriter Leonard Cohen, who died in November at 82, became a superstar as a senior. He brought his earnest voice and moody guitar into the 1960s counterculture when he was in his early 30s, and he made a substantial impact musically well into the 1970s. In that time, he was a cult artist on a very large scale, so to speak. But after the explosive popularity of his oft-covered 1984 song, “Hallelujah,” and a management swindle that obliged him to become a road dog to restore his income, he became an arena-filling legend and, to his hard-core fans, a prophet.

“Leonard Cohen: Bird on a Wire” is an account of a particularly fraught period in the first phase of his stardom. Directed by the British documentarian Tony Palmer, it follows Mr. Cohen and his small band — two guitarists; a bass and fiddle player; Bob Johnston, the Nashville record producer and musical near-anarchist; and the backup singers Donna Washburn and Jennifer Warnes — on a spring 1972 tour of Europe that ended in Israel. It’s a time Mr. Cohen later described as “confused and directionless.”

The movie was completed in 1974, subsequently revised (the current print contains an in-memory-of dedication to Mr. Cohen’s longtime lawyer, Marty Machat, who appears in the film and died in 1988), and only now is having a theatrical release. It follows the outline for road music documentaries that was later successfully sent up by “This Is Spinal Tap.” Mr. Cohen granted extraordinary access to Mr. Palmer and his crew. There’s footage of Mr. Cohen and his male band mates showering, even. During one backstage meet-and-greet, Mr. Cohen is baldly propositioned by a female fan, and he demurs with a combination of gentlemanly grace and camera-conscious awkwardness. He is polite and witty with interviewers. When one of them says of Mr. Johnston, “I didn’t know he was an organist,” Mr. Cohen replies, “He’s hardly aware of it himself.”

The artist’s lightheartedness, which might have been forced to begin with — while always a remarkable live performer, in the early part of his career, Mr. Cohen was also an often reluctant one — cannot hold. Technical problems plague the shows, as amplifiers unexpectedly feed back, demolishing the contemplative simplicity of the music. There’s a tense confrontation with some truculent, dissatisfied fans in Berlin. Mr. Cohen’s self-deprecating humor begins to take an edge. One night he strums his guitar and sings “Leonard Cohen/[strum]/is going to sing his songs/[strum]/of anguish and despair.” And on the last night of the tour, in Jerusalem, the artist crashes emotionally, and the question of whether he will rally provides some suspense.

Mr. Palmer captures all this with a keen eye. The movie is a worthy time capsule and a must for Cohen devotees. Its occasional meanderings into artiness, which take the form of interpolation of outside footage (war atrocities and home movies, mainly) are emblematic of the time it was made and mercifully brief.