sdahi wrote:Ania's design is the best in my book but the other two designs in top 3 are quite good too.

x
"It's strange. You never start out life with the intention of
becoming a bankrupt or an alcoholic or a cheat and a thief.
Or a liar." -- Raymond Carver
Top

phillip? That makes you a lifer B'Loser. YaY, YOU! I love the logo on top of this comment. Thank you! Kudos!

1. Trollkind owes me an apology and until it is tendered, he is no longer beneath my contempt.*

3. Okay, I lied. I confess: I am one of the fakes (but not the flakes). Now that IMPECCABLE REGRET currently rests atop the po-charts around the universe and got officially launched in Canada (Talon) and the US (Penguin) yesterday, I can finish my LC book and will, Lard willing. IMPECCABLE REGRET is my last collection of poetry; but, if you elect to acquire it, you will not be disappointed.

Firstly, it answers FINNEGANS WAKE (and plays off "invincible defeat"); plus, it has already been declared a masterpiece / success by the world's best poetry critics and commentarians; but, more to the point? Much LC appears in the work, too. (Dar and ValGal, BTW, both your full names appear in the book alongside EiJarkko and Rauli.)

* The unbeautiful creep used to make cruel, hurtbroke, and vicious unfun of my portmanteaus and neologisms; but, I was so far ahead of the curve, eh, M'Dear Beautiful Losers (B'Losers)? Betcher bottom buckeroos . . . And? Trollkind is the reason the word "cyberbully" came into existence. I used it first in the old NG, Boo Trollkind, YaY, ME ME MEANDERTHAL ME

p.s. I plan to post a .jpg of one page that I hope you love since it contains a tribute and salute to my BFF now deceased, Sandra Merriman . . . Some of you will remember her, some of us will never forget her; and, now, she lives forever in IMPECCABLE REGRET . . . You know from my pic in the Gallery where to go to see how gifted was this incredible woman who still means the world to me . . .

p.p.s. I unconditionally, undeniably, and standfastly love all of you who love me foreverly, too

ENJOY A SELECTION OF IMPECCABLE REGRET'S PUSHCART-NOMINATED SEQUENCES IN HA&L:
http://bit.ly/1Frlmhu
IMPECCABLE REGRET'S TALON/PENGUIN BIRTH DAY:
http://www.talonbooks.com/books/impeccable-regret
"JUDITH FITZGERALD PRESENTS II: SIX OF ONE is an eminently worthy and world-class enterprise. Happy to have had a small part in it."
— Leonard Cohen
http://tinyurl.com/leolovesjfpresents
Top

Hello,
here is the one new logo which has its own t-shirt

Thank you for sharing your logo, Eva! 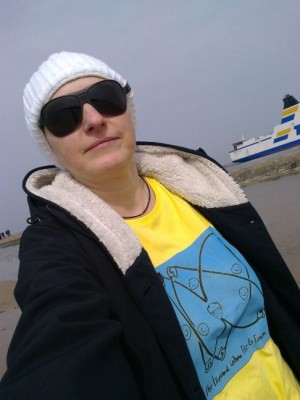 I have a question to fans...Are there others?

I wish you a beautiful May, to all the fans
Beata

P.S. Barely I had time to make selfie, ship "rushed" into port

. I was trying to match the colors to the color of the ship