The exhibition "The Last Grand Tour / Contemporary Travellers in Greece" at the Museum of Cycladic Art in Athens, presents the work of internationally acclaimed artists who lived and worked in Greece during the 20th century. Among artists, Leonard is represented by “Like a Bird on the Wire”, which he started writing while living on Hydra; the song can be heard in the background.
The exhibition is guest-curated by Jessica Morgan (Tate Modern) and runs through to October 10. (Stamatina, we still have time;-)
All the participants and details here:
http://www.lastgrandtour.gr/en/the-artists.html

GREECE as a focus of artistic creativity is the theme of The Last Grand Tour, the Museum of Cycladic Art’s latest offering that examines how the cultural history and geographical characteristics of this country have continued to provide a source of modern artistic inspiration.

Guest-curated by Tate Modern’s Jessica Morgan, the group show features works by international artists who have lived and worked in Greece over the last seven decades.

Prior to giving reporters a guided tour of the exhibition on April 13 she said that as part of her curatorial assignment she was “keen to come up with a proposal that would be of certain significance in the context of both the museum and Athens”. Morgan, a frequent traveller to Greece over the last eight years, was fascinated by Cycladic figurines, also a source of inspiration for many a visiting artist.

In the process of tracing the key figures among those artists who not only visited the country on many occasions but also produced work here, she selected the ones who were “the most embedded”. During her visits to the island of Hydra she came to realise that artists were not just visiting Greece in the passing. “They had started to keep homes and produce a body of work here,” she said. “They were not simply working in isolation but were meeting with other artists, contributing to the establishment of an artistic community.”

Among artists, Canadian singer and songwriter Leonard Cohen is represented by the famed “Like a Bird on the Wire”, which he started writing while living on Hydra; the song can be heard in the background.

Unlike the original Grand Tour of the 17th and 18th centuries which served as an educational rite of passage for the privileged classes and focused on the viewing of the ruins of the Classical period, The Last Grand Tour is not confined to Greece’s glorious past that inspired Lord Byron and the Romantic artists.

For the first time ever, the Cycladic Museum show brings under the same roof artists “who were not just drawn to antiquity”, Morgan said, “but to ordinary life too, including the country’s food or traditions that were starting to disappear.”

Museum visitors will have the opportunity to see paintings by British artists John Craxton and Ben Nicholson. Craxton’s “Black Greek Landscape with Figures” (1950) indicates the artist’s love for everyday culture. A landmark work, his “Self-Portrait” (1946) was made during an early trip to Greece in the company of Lucian Freud.

Nicholson’s abstractly rendered still life “Aegean” (1955) alludes to Greece’s architecture and ancient sites along with pointing to an influence from Dutch painter Piet Mondrian and other emigre artists who, according to Morgan, had a huge impact on the British art scene.

A few examples from Cy Twombly’s “Delian Odes” series - part of which was accidentally destroyed by a group of children at the artist’s hotel room in Mykonos - are suggestive of Twombly’s love for Greece’s culture and mythology.

The pleated texture of Lynda Benglis’ stainless steel and copper sculptures recalls the drapery of the Caryatids’ attire and points to the artist’s studies in fabric.

Just like Manfred Pernice and Juergen Teller, two of the exhibition’s younger artists who adopt an ironic perspective in their work, Martin Kippenberger combines academic-looking works like the models for a transportable underground station and a ventilation shaft with humorous pieces like drawings, posters and models from his so-called MoMAS (Museum of Modern Art Syros) series conceived during his regular visits to the island.

The Greek-born Lucas Samaras, Iannis Xenakis and Jannis Kounellis, who left Greece in their youth but continued to make works linked to its history and culture, are also represented.

Aw! Wish I could be there
newfoundland--understand?
Top

Sophia wrote: The exhibition is guest-curated by Jessica Morgan (Tate Modern) and runs through to October 10. (Stamatina, we still have time;-)

set the place, date and time and I'll be there!!!

we're going on Sunday. are you free on Sunday?

stamatina, sweetheart
miss you and your country!
i´ve been on naxos
beginning of september and saw some fantastic cycladic idols
but without leonard.
sunday sounds great, early afternoon

Just got home after a wonderful afternoon with Sophia, part of which was our visit to the Museum of Cycladic Art.

The exhibition was spread in five or six different rooms and apart from the last room, in which there was a different sound exhibit (still not sure what it was - it wasn't a song), you could hear Bird On A Wire playing everywhere. Again and again and again (I wonder, how do the guards cope?

Too bad you can't photograph music. However, you CAN photograph the signs..

Excuse the quality of the photos, I took them with my cellphone.

Hugs to all!
Stamatina 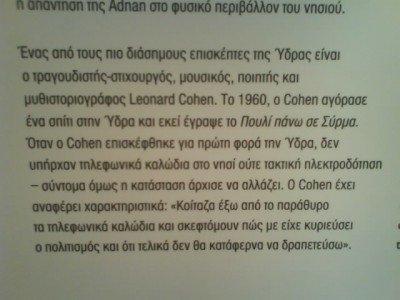 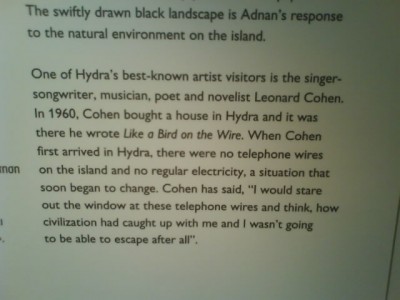 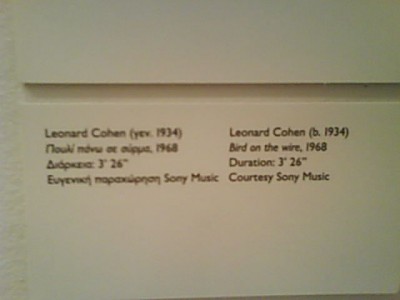 ..and the name of the exhibit!

Thanks for the report, Stamatina,and for witnessing this tribute for us.

I wish you could all be there, it was really sweet. And somehow, Leonard's song seemed to be an exhibit more important than the rest, because it followed you everywhere, you couldn't just pass it by!