Artur Jarosinski has passed away

Hi everybody, just passing by on this forum to share some memories. (posted on the forum of expectingrain.com - dylan - earlier this week.

This is such incredible sad news. He was so precious in so many ways, f.i. in the way he shared the recordings. He loved to see that people liked it and followed the number of downloads and the remarks. After a concert he could hardly wait uploading his recording. When he was staying at my place in the Netherlands he used my computer to do so. The last time was after the three 2009 Dylan concerts in Amsterdam. Since I am living close to Amsterdam and it was beautiful weather and it was the third concert in a row, it was my wish to go by bicycle and cycle that 15 km (12 mile), just for the change. Artur mocked but had not much choice. We cycled through the beautiful landscape and I told him the names of some water birds (Fuut etc. ). Artur’s revenge was sweet: the way back he cycled as hell! I had to make him stop to get my breath back, but he had to upload that concert ASAP (in two different qualities) .
For me he was precious as a person too. I am devastated by the news of his death. I hesitated a while to share this with you, because Artur was such a private person. I do so ‘cause I hope to meet some people to share some memories.

I am a Dylan fan since1978, living in Holland and I had not many ways to share my love for his music (there were times you could make a fool of yourself by telling you loved his music), until the internet.
One of the first persons I bumped in to was Artur. He posted on rec.music. dylan his impression of the eclipse of 11 august 1999.” “Darkness at the break of noon, Shadows even the silver spoon, The handmade blade, the child's balloon, Eclipses both the sun and moon”, it is exactly like the song!” For me the eclipse was ‘a once in a life time’ experience and Artur’s observation made it even more wonderful. I never had noticed the connection with the song, (Dylan hit the nail on the head…. Those shadows…how did he know?) if not for Artur. I thanked him for that and a lot of emails & packages followed. At that time he was studying English in Krakow, 19 years old, and he had already a respectable collection of tapes (how did he do that??!).
At that time he had seen one Dylan concert in Warsaw 1994. In 2000 I persuaded him to come to Germany to some concerts (Berlin and Dresden ….Bob’s birthday!) and we met in real live (‘seeing the real you at last’). Since I am 20 years his senior it felt a little bit like I was his mother and he was my son that I had to protect. A lot of concerts followed, not only Dylan. He often stayed at my house, he met my family and friends, in between concerts I showed him Holland, he was the tourist.

He was always so kind and generous in sharing, so funny and intelligent, he always had that Dylan quote ready. Also the last time we met (in Mainz this year). I missed him at the concert (I was much too late to be in het front regions) and we phoned after the concert and tried to pick a place to meet. Me: ‘How can I find you in a city we both don’t know and it is almost dark?’ He: ‘It’s not dark yet….but it is getting there’.
The last years Artur’s enthusiasm for Dylan decreased, he had everything there was to collect, and he went on collecting and seeing / taping Leonard Cohen. So our contacts were less frequent (of course we went to see Cohen in Amsterdam and he almost persuaded me to film that), but he will always have a place in my heart.
Nelien
Top

Mary, thank you for your kind words.

Artur had positives thoughts on this LC community, 'nice people' he told me.
Top 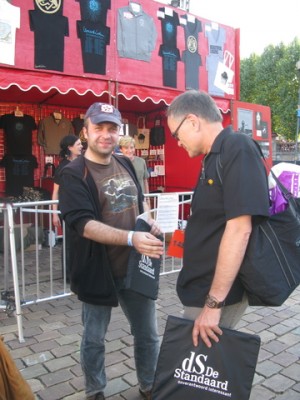 Artur and Jarkko in front of the merch stand in Ghent, August 2010

Time passes so quickly.One year ago Artur left us forever.I think,some of us who knew
Artur think of him sometimes while watching concerts life or on youtube. 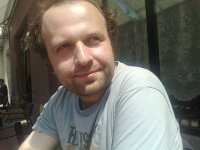 Thank you for posting this kaz. I often think of Artur / Banalny when I'm on Dime and I thought of him again when we were in Ghent last week. it's hard to believe a whole year has gone by since he passed away but his legacy lives on.

kaz wrote:Time passes so quickly.One year ago Artur left us forever.I think,some of us who knew
Artur think of him sometimes while watching concerts life or on youtube.

Yes, I think of Him very often, especially when passing next this horrible place in the centre of my city

Let's only hope he is still able to hear and watch from above the current concerts and new songs..
No way to forget our dear Artur !!!

Light a candle for Artur's memory

Artur, dear friend you are missed so badly.

I had to wait a while to do this because they only allow six candles to be alight at a time.
I have just now lit a candle in remembrance of Artur. He will never be forgotten; he lives forever in Leonard's music that he made available to all of us.
It doesn't have to be perfect, it just has to B4real ~ me
Attitude is a self-fulfilling prophecy ~ me ...... The magic of art is the truth of its lies ~ me ...... Only left-handers are in their right mind!
Top

I had to wait a while to do this because they only allow six candles to be alight at a time.
I have just now lit a candle in remembrance of Artur. He will never be forgotten; he lives forever in Leonard's music that he made available to all of us.

Thank you Bev, I've seen your candle there - great of you !
I'll continue checking the site so there will be always candles alight.

I've spoke to Artur's dad, who appreciates very much all our forum remembrance of Artur and told me about this possibility.

sorry to hear the sad news my thoughts and prayers go out to Artur's family at this sad time
I have been a Leonard Cohen fan for 28 years feel free to email me if you wish to keep in touch!
Top

My condolences for all who knew him and to his family. 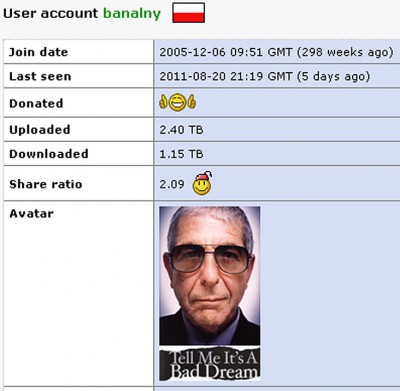