Oh my, I've been away from my comp since yesterday, and when I came back - one of the first things I saw in an on-line news service was "LC collapsed onstage" - I almost fainted with shock! So I rushed here to see the latest - Thank God he's okay! And thank all of you, who reassured us frightened fans.
Get well soon, Leonard, get well soon! Love you!
Veronika: Prague 2008/Berlin 2009/Bratislava 2009/Prague 2009/Prague 2013...
Top

lizzytysh wrote:I'm very relieved that Leonard has recovered. I'll bet that bothered him no end that he had to stop the concert. First things first, though, Leonard... that means you.

What is it with Virgos and tummy bugs this weekend... I've been in bed all day today not eating anything as have nausea and ache all over. I felt even more nausea when I saw the BBC headline that Len had collapsed. So relieved to see he is ok.

p.s from one Virgo to another if do you read this Len - don't push yourself too much I know we have a habit of doing so...

I'm so glad Leonard is feeling better. I have seen him several times in Europe and was fortunate enough to meet him in Liverpool. He was so gracious.
Get well soon Lennie we love you.!
Top

Yes dear Leonard Cohen, please rest and feel better and then come back with full strength.
We all (the World) desperately need you, your words and your music for many years.
with love and respect
Susanne
Denmark
Top

OH MY GOODNESS! I am so glad that Leonard is feeling better- that was scarey news! I really hope he doesn't push himself until he really feels properly better.
Thanks to everyone who had posted updates and info!
x
Weybridge MBW 11th July 2009

'All I know - and you must listen very carefully to this... All I know - is that I know absolutely nothing' - Frank

'Who ever loved that loved not at first sight?' - Christopher Marlowe

Much misunderstood... was the 'Hippie' with a reality fixation...
Top

Thank God he's okay! I will feel more at peace when the concerts are over though, a tour as long and busy as this may be a bit too much for anyone... He has indeed already given us so much that no one will mind if he takes the time to rest!
Top

'All I know - and you must listen very carefully to this... All I know - is that I know absolutely nothing' - Frank

'Who ever loved that loved not at first sight?' - Christopher Marlowe

Much misunderstood... was the 'Hippie' with a reality fixation...
Top

Gosh, what a terrible shock!! I read the horrid news this morning and then had to leave home. Usually I never use my mobile phone to get online but today I sure made the connection spark all day. I'm glad and very relieved that Leonard is feeling better. Still wish he'd cancel next weeks concerts and take some time to fully recover. I had a bad case of food poisoning some years ago and it took me at least a week to feel good enough just to walk from the couch to the kitchen...

We'll all rather see you taking your time to recover, than collapsing again.
Top

Just got back from synagogue and heard the news!!!!

Thank god he is doing well.

Sending him a REFUAH SHLAYMA.

We will pray for his health.


Dear Leonard, please rest and take good care of yourself. I love you so enormous much.
xoxo
Viivi
A cross on every hill
A star, a minaret
So many graves to fill
O love, aren’t you tired yet?

Thanks for the update!

So good to know he is well. Anyone who has attended any of his concerts knows how much effort and dedication he puts in every single performance. I hope he will take a couple of days to rest and recuperate.

Shana Tova - Happy New Year to all.
There is a crack in everything - that's how the light gets in.
Top 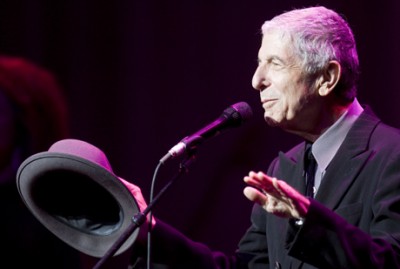 Legendary Montreal singer-songwriter Leonard Cohen performs at Place des Arts in 2008. Cohen collapsed during a performance in Spain on Sept. 18, 2009, and was helped off stage to receive treatment from a medical team.
Photograph by: Marcos Townsend, Gazette file photo [See link for more pictures]


MADRID – Montreal singer-songwriter Leonard Cohen, who turns 75 next week, was released from a hospital in Spain hours after collapsing on stage during a concert, hospital sources said Saturday.

Organizers of his concert in the eastern city of Valencia said he had fainted on stage Friday night after being stricken with food poisoning.

Witnesses told Spanish media Cohen was performing Bird on the Wire about half an hour into the show when he lost his balance as he went to pick up a guitar.

He was saved from falling by backing singers, but moments later he collapsed again and was helped off stage to receive treatment from a medical team in the concert hall.

He was then taken by ambulance to hospital, from which he was discharged in the early hours of Saturday, the hospital sources said.

A clip from the concert posted on YouTube showed him sitting on a platform on the stage and then keeling over sideways.

He had performed three songs - Dance Me to the End of Love, The Future and There Ain't No Cure for Love - before he collapsed.

A member of his band, Javier Mas, came out almost an hour later to tell the thousands of people gathered in the Luis Puig Velodrome that Cohen was suffering from a stomach complaint and would not be returning to the stage that night, but that he hoped to reschedule the show for another time.

Valencia was the penultimate stop on his nine-concert tour of Spain, which is due to end in Barcelona on Monday, his 75th birthday.

Born in Montreal, Cohen published books of poetry before embarking on a singing career with his smash debut album Songs of Leonard Cohen in 1967, which included one of his best-known songs, Suzanne.

He quit the music scene in the early 1990s, living at a Buddhist monastery in California, where he was ordained a Rinzai Zen Buddhist monk and took the name Jikhan, meaning "silence."

But he was forced to return after he was swindled out of his retirement nest egg by his former manager.

His most recent album, Heather, was released in 2004. And last year, he embarked on his first world tour in 15 years.

His songs have also has been used in dozens of movie soundtracks such as Natural Born Killers and Shrek.
© Copyright (c) The Montreal Gazette

just so glad you re feeling better please don t scare us like that. Have some rest now we'll wait years for you.

with very much love leonard

At least the Agence France-Presse/Montreal Gazzette chose a far more fitting photo. The other one is from the newspaper photo file and has nothing to do with how Leonard looks these days.
"Be yourself. Everyone else is already taken."
~ Oscar Wilde
Top

Dear Leonard,
Thinking about you constantly and at this precise moment I'm listening to "Live in London" cd. I sincerely hope that you are feeling SO much better this evening.
Love and hugs from your number one Scottish fan,
Maureen MacPhie
Top
Post Reply
157 posts