Well I can translate it roughly later, although, it doesn't say anything really deep

)
The link is here just for the archive.

Double-sided poster (11x17) for Live in London, another eBay found: 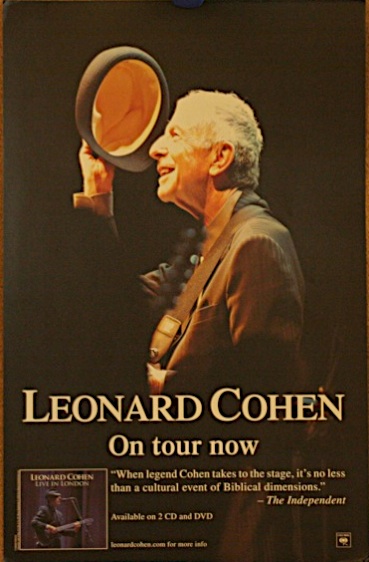 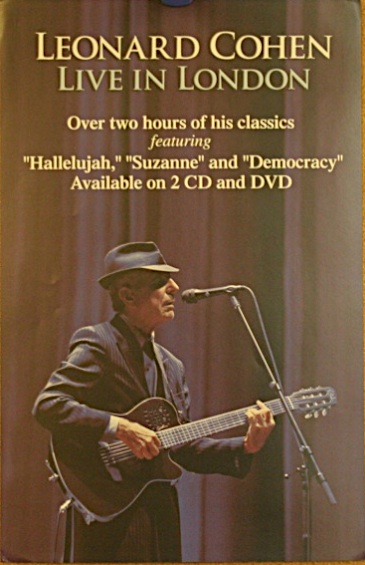 the dvd and the cd's from the concert in london became a golden record in israel selling over than 20,000 records within only a month and a half.
i'm sure that the news about LC upcoming concert in israel was a Catalyst for the sales of the dvd and cd's.

I didn't see anybody posted any billboard list, but last night I was in EMPIK store here in Krakow (EMPIK is something like Poland's Barnes & Noble, biggest chain of multimedia stores), and Live In London is in Top 20 - this week at place #17, so maybe it was even higher as it's 6 weeks since it was released.
Leonard Cohen Newswire / bookoflonging.com (retired) / leonardcohencroatia.com (retired)
Top

Another Australian promo poster, this one is in landscape format (A3): 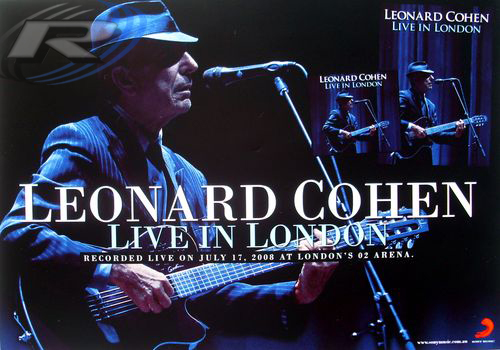 Leonard Cohen released his new CD 'Live in London' March 31st. It was made at a live concert in London in July of 2008. Cohen is 74 years old and composing music and performing is still his passion and he continues to do it so well. He is so talented and like fine wine, he just keeps getting better with age.

Since the 60's Cohen has made a big impact on the music world. With songs like Haunting Suzanne and the 1967 Judy Collins cover his fame just continues to grow.

His Columbia released new CD, 'Live in London' is a double dose of 26 songs over a span of two CD's. Over the past 40 years of his music career, he still has maintained a freshness about him and devoted himself and his music to his fans.

Leonard Cohen is and will continue to be a musical legend. Many tend to overlook him as an artist but the live recording captures his greatness. He involves the audience and keeps their attention whether it is at a coffee house or a huge concert hall. He is definitely understated as an artist but his voice says it all.

Cohen's backup is fabulous and some audiences may be familiar with the Webb sisters who are in several of the cuts.

The New Leonard Cohen CD can be bought at CDWow. Live In London- Leonard Cohen is a wonderful performance especially for a singer that has been working for 40 years.

It was just over one year ago - May 11, 2008 - that Leonard Cohen began his first tour in a decade and a half right here in Fredericton. That show was a triumph, and it was a harbinger of a world tour that is still going strong and getting rave reviews across the board.

The tour now has a beautiful document for posterity - a release of a show last summer in London available either in two-CD or one-DVD format.

We saw the template here in Fredericton - 20 songs - and this set follows the same structure in a slightly fleshed out 25-song set from July 17.

Both shows revealed the same thing. There is no one like Cohen and, sad though it is to say, it is our good fortune that he got fleeced out of his savings by his former manager earlier this decade. Coming out of retirement with an ace band, he skitters with unique grace across his career.

The Live In London concert is heavy on his material from three consecutive albums -1984's Various Positions, 1988's I'm Your Man, and 1992's The Future. It is fleshed out with career-launching tracks from the 1960s and a sprinkling of songs from his four albums of the 1970s and from his 2001 album Ten New Songs.

The energy and strength of Cohen was really the Fredericton concert's most pleasant surprise. He was in fine voice all night long, and his enthusiasm never flagged. That has been the hallmark of the entire tour, and it can be just as emphatically stated for the Live In London document.

His reputation for dour joylessness is, meanwhile, eschewed with his charming and witty between-song banter, and by the way he carries himself visually on the DVD.

Mas, Larsen, and Beck are the bedrock musicians in the team. Mas' skills with banduria, laud, archilaud, and 12-string guitar are intense beyond description, most notably on a late first set version of 1974's Who By Fire and an early second set version of 1979's The Gypsy's Wife.

Beck's arrangements are sometimes jarringly inventive - such as the move of So Long Marianne from his 1967 debut album Songs Of Leonard Cohen from 3/4 time to a 4/4 with some cadence shifts - but everything works like a charm.

Meanwhile, the Hammond B3 work of Larsen on some songs is both key and a welcome lift to the synth heavy template of Cohen's post 70s studio work presented live. There are lots of examples, but Anthem from The Future and the now ubiquitous Hallelujah from Various Positions particularly stand out.

Of the three backing vocalists, the shining star is Sharon Robinson. She has sung with him off and on through the years, and was co-credited with him on Ten New Songs.

Live In London is a perfect document of a triumphant reunion - and a great memory bringer to those of who were part of that blessed throng here at The Playhouse just one year ago.

Fredericton-based freelance writer Wilfred Langmaid has reviewed albums in The Daily Gleaner since 1981, and is a past judge for both the Junos and the East Coast Music Awards. His column appears each Saturday.

Please help!!! I am trying to source the promotional poster of Leonard Cohen Live in london which is the same as the DVD cover for the same Gig. I need this for my beloved's birthday as he so wants this on his music room wall. I have searched everywhere I possibly can on the internet, I have even called various concert promoters and begged but to no avail. This is my last cry for help.
Please point me in the right direction or if you have it sell it to me I would be forever in your debt.

Many Thanks and much hope

My email address is mariamcwilliams@sky.com
Top

Try eBay. All those posters I posted in this thread are scans from eBay and many are still on sale.
Leonard Cohen Newswire / bookoflonging.com (retired) / leonardcohencroatia.com (retired)
Top

cd and dvd the real man in me

Here I am
in my speaker .....................,
that is my souround sound system as in my home cimea and YES L C is live in London and it is boarding on ORGASMIC....(one could say better than sex )... to see the guy and the guys in my home having travelled a bit of a distance to see and be part of the gig( thats roadie talk)and other gigs ,concerts , works of art , meeting the guy from about ,say 50 (fifty) feet, love to be up close and shake his hand and to thank Leonard for all the positive directions he gave me in the past fifty years, and not even to tell him that I love him because he could not hear me, that I did .
He is here in our house and sounding so well that he will never die . on screen he and his teacher drank a glass of wine and the guru asked for forgiveness for not dieing ---------Brillent who but Leonard can tell stories like that he is never going to die even though he thinks he should be. Leonard stop thinking or even thinking that way

G R E G O R !
There is a crack in every thing thats how the light gets in
Top

Another brilliant review of the London DVD is in the June 2009 issue of RECORD COLLECTOR.
The DVD gets maximum = 5 stars and the review ends with
“Live DVD of the year, no contest”.
1988, 1993: Helsinki||2008: Manchester|Oslo|London O2|Berlin|Helsinki|London RAH|| 2009: New York Beacon|Berlin|Venice|Barcelona|Las Vegas|San José||2010: Salzburg|Helsinki|Gent|Bratislava|Las Vegas|| 2012: Gent|Helsinki|Verona|| 2013: New York|Pula|Oslo|||
Top

Amazing!
Today I finally bought the DVD and CD, and just the way I asked the seller if I could get one of the promotional posters to the display window .. and became a miracle

SuzanneT
What you have now is what you were, and what you will is what you do now...Buddha
Above the graves of those painful sheds tears for the unspoken words and deeds missed...Elizabeth Harriet Beecher Stowe

Cross-posting this because I think it bears repeating here...

Before Monday night's concert I was debating whether or not I should buy the DVD of the London performance. After all, I had seen the show twice, watched excerpts of it on television, listened to the NPR broadcast, etc.

BUT, I did buy it and am glad I did. The DVD is a pristine record of an incredible tour with terrific sound and images. I would highly recommend that anyone who wants a personal, permanent record of this incredible tour invest the few dollars it costs. It's well worth the money and (no offense) infinitely superior to much of the material found on Youtube. Not only was I able to appreciate the increased intimacy, I was carried back to the concerts I attended and relive some wonderful moments.

Interesting find at eBay: Leonard Cohen's 2009 promo-CD Selections from Live in London - 10 tracks CD sampler for radio stations only, which contains RADIO EDITS of some songs (probably without talk, and with shortened applause etc.?) 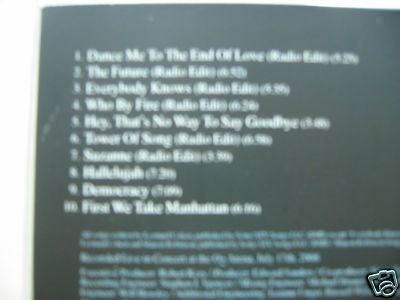 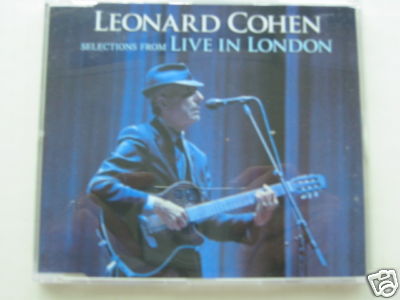 Things I Like
Too many on-line reviewers focus on the negative. All they do is complain about stuff they don't like. This blog is about the things I do like.

I remember first being exposed to Leonard Cohen (at least consciously) in a grade 11 English class, where we all laughed at his odd voice (early Cohen - Suzanne to be exact), and the teacher got quite annoyed with us, as we weren't really listening. I have no idea what the purpose of the lesson was, but some of the lyrics stuck with me.

A couple of years later, Cohen's voice was used to fantastic effect on the soundtrack to the movie 'Natural Born Killers', prompting me to hunt down 'The Future' and to read his novel 'Beautiful Losers'. At that point, I became a fan for life.

This double-disk album was recorded recently in London during a massive concert Cohen held there. When you consider his age, it's unlikely that there will be many more opportunities for Cohen to put on a show of this nature, and so it is very good that we have such a well-recorded record of his brilliance.

The show sounds like it was a lot of fun, and Cohen still sounds fantastic throughout. There are a couple of songs that seem unnecessary, but there aren't any major omissions (except for 'Famous Blue Raincoat', which I would have loved to have heard on here). The applause and between-song banter can get a little tiring, keeping this disk from getting a lot of play, but as a document of one particular night, this is a very important cd to own.