There are reports in the Greek press
about Leonard's concert in Athens but
we are still on holidays.

And some nice shots here:

Here is a translation I made of the piece Sophia posted above:

There were some younger ones that were impressed by the lack of "visual effects". They did not know that there were times when poetry and God-inspired music were enough in order to make the knees bend and the head to fall in front (in such a position of pilgrimage or of a foetus, I saw many in Terra Vibe that evening).

There were also some of "that" generation, that were impressed by the force of the voice of 73 years old Leonard and by seeing him getting in and out of the stage running like a youngster..
There were also some lying on the ground alone with the eyes fixed to the sky above, couples in all the positions of tenderness, girls and women of all ages that did not bother to sweep the teardrops from the cheeks (because the next song would bring new ones) and a lot of professional Greek musicians.

We were finally, two-three thousand persons there that we passed from the same stages: impressed at the beginning, then singing along and at the end feeling that the music was getting into our veins and tuning our body (and our pulse) in to the rhythm. Little later, we realized that the voice and the words that came out, you could say from the deepest corners of the soul of this great poet, were passing through the pores of our skin, breaking us and transforming us into immaterial creatures. Into souls that is, that through the losses, the longings, the love, and the crucifieds of the songs, we were becoming again more human-like humans. (Defeats and poetry can do that.)

And when somebody manages with his songs to rouse your soul, he can with unforeseen easiness make also your knees bend and let the body surrender to a prayer that you do not know anymore if it is coming out from the loudspeakers or from your chest.

"Prayer" is the word with which one can describe what Cohen and his musicians accomplished during those three hours.
Hallelujah that is to say, all the way up to where the Gods live.

PS) It was one of the finest, most emotional and perfectly coordinated concerts I have ever seen balancing on a walker’s tightrope.
M.L

I had the privilege of attending the Athens show. Needless to say it was absolutely fabulous, no matter that i didn't understand a thing he was saying in greek

(i'm romanian). I loved the place (Malakasa - Terra Vibe Park), although far from the city and a little bit hard to get there for a tourist. Anyway, lucky for me I have the chance of seeing him again live on 21st of September in Bucharest. 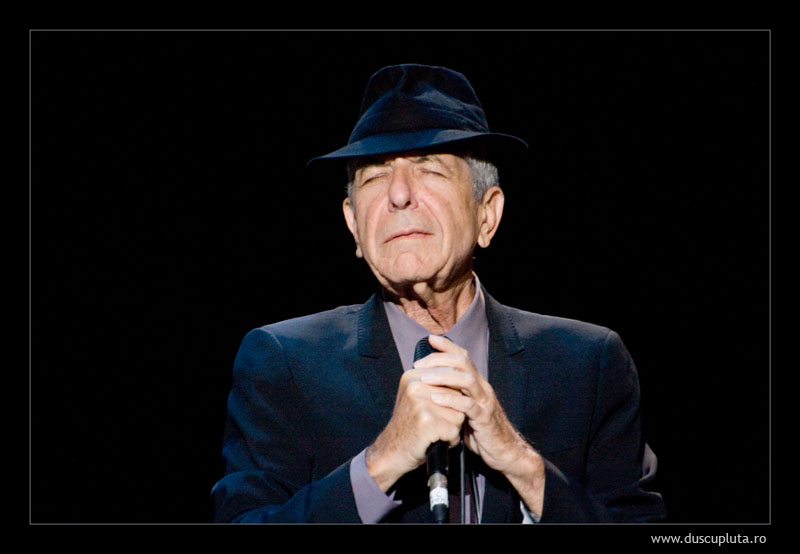 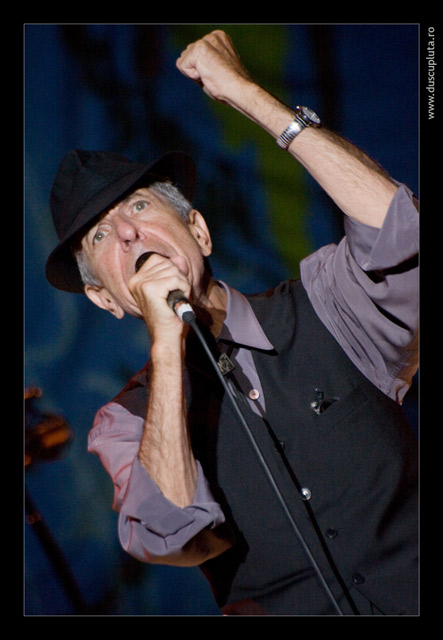 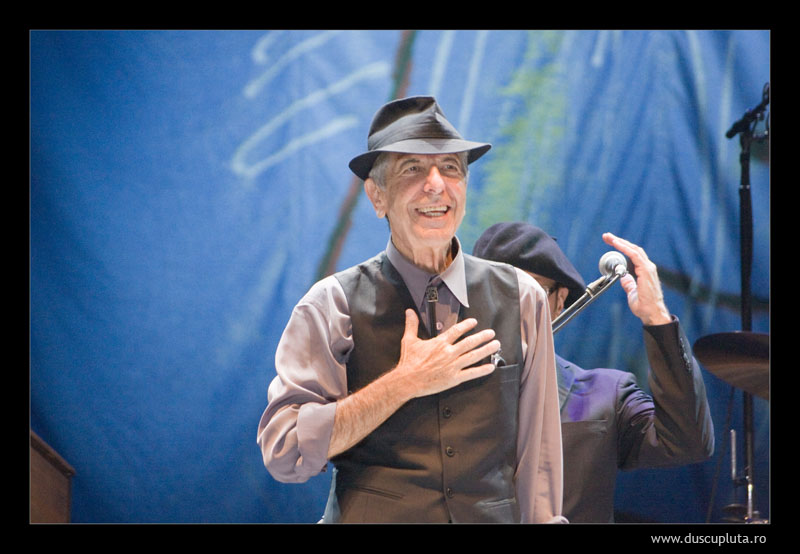 This is why I never use my camera at concerts! Always someone to do it much better than me.

Thank you.
You should also advertise your Hydra cats pictures, they are lovely. And I'm very happy to find a romanian finally "dus cu pluta" in the same direction as me.
Laura
Top

There are no words to describe this concert. 18 days have passed and I can still feel the magic of that night.
Are there any Greek fans who are thinking of attending another concert of Leonard abroad?
Maybe,we could organize sth together.Bucharest isn't that far.And for London we can find cheap air tickets if we book early.
Is there any chance of Leonard giving another concert here in Greece during the fall tour?
Top

It would be only fair. And I hope it will be as wonderful as the concert we lived in Athens.
Laura
Top

Τhe following was published in “TA NEA” newspaper
The day before the concert at Terra Vibe.
http://www.tanea.gr/default.asp?pid=2&ct=4&artid=79412


LEONARD COHEN TOMORROW AT MALAKASA
The Gentleman, "Suzanne" and the indelible lyrics
by Maria Markoyli

There is a sweet anticipation in the air. It’s really at least fifteen years since the last time Leonard Cohen had was on stage. And now, one of the most important creators, the voice that can speak the simplest words that can «stick" on you indelibly, returns. With songs like life stories.

In between are the years that separate «I m Your Man" from today. On the other hand, you have Cohen that "has influenced" almost anything good you can listen in discography today. From the underground, frozen sound of the National to the porcelain music of Rufus Wainwright. And not only.

His induction ceremony at the Rock And Roll Hall Of Fame last March was hiding a big surprise for his fans. Cohen announced his decision to go on the road again with concerts, to make a tour, here and there. A dream. And he is already on the road. 150.000 people saw him in at the Glastonbury Festival in England.

"Suzanne" is well. And Cohen better. In these concerts now he plays almost three hours - say the reports so far. He is moving, polite and has a great band with him. Usually he starts with "Dance Me tο The End of Love". And then: "So Long Marianne" and "First We Take Manhattan".

At 73, he can lead his audience to the steepest refrains ("The Future") and onto other extreme emotional situations ("I m Your Man"). Four years before, Cohen released «Dear Ηeather», but now there’s a new album in the making. We will have news about it shortly, as at this moment the artist communicates with his public. His voice today is deeper and cannot reach all the notes. Does this bother anyone? Of course not. Cohen returns to Greece. And not to (his) Hydra for holidays. His retreat in the nineties was a Buddhist centre up in the mountains of California. The spiritual Cohen never disappeared even when he was making his recordings. Later he found himself in the midst of a legal adventure when it was revealed that his manager had stolen a big part of his money and life goes on.

Actually, as he has said, he had no intention of becoming a singer. All he wanted was to write, although the guitar he had begun to learn as a child always intervened and changed his plan. With his suit, his hat and a small smirk at the corner of his lips he makes you think that everything was planned from the beginning. Yes? No. «I was just enjoying the company of women", he says again and again. He is a classic ladies' man. That is enough for him and he says that it flatters him. Then he lowers his look. Cohen-style modesty. Which in reality is unrestrained force, a statement of a conqueror with only arms the songs. Those and his cracked voice.

ok, it's an article from before the concert, but nevertheless...

serpico11 wrote:There are no words to describe this concert. 18 days have passed and I can still feel the magic of that night.
Are there any Greek fans who are thinking of attending another concert of Leonard abroad?
Maybe,we could organize sth together.Bucharest isn't that far.And for London we can find cheap air tickets if we book early.
Is there any chance of Leonard giving another concert here in Greece during the fall tour?

There is an article in Kathimerini, 31-08-2008, characterizing the Leonard Cohen concert the most impressive concert in Athens this summer. Here is a link to the online version:

and the article with the photo: 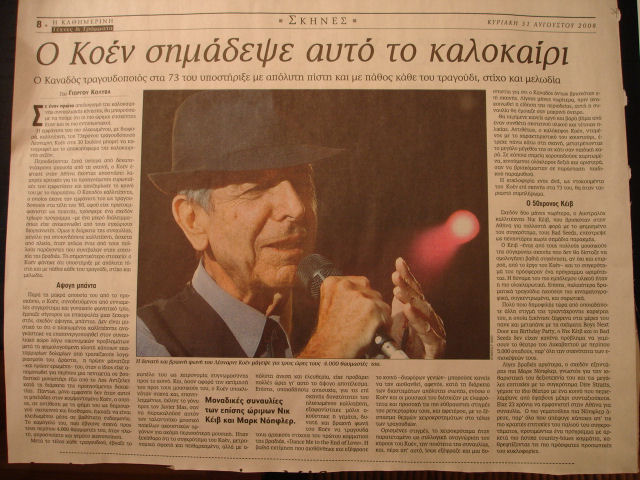