Anneri
that was a great clip, thanks. There was a huge crowd there, would you be able to tell us what Marianne said?
jacqui
"I needed so much, to have nothing to touch - I've always been greedy that way"
Top

Ok, then i will try to make a report on yesterdays wonderful evening.
It was with no doubt a great night, the audience was very good, and Leo was in a great mood, really enjoying the evening.

The songs have been described a lot from other concert, so most of u will know how he did his songs. I will try do tell you about some of the highlights besides the brilliant music.

- He entered the stage met by standing ovations from the whole stadium, ca 12000 people were standing and clapping in pure joy just to see him, Cohen was clearly moved by the great welcome he recieved. Said a few words to thank us and started "dance me..."

-It was Canadas national day on 1.july, and cohen was clearly moved by the norwegian and the canadian flag waving in the wind at the far end of the stadium. He stopped between two of the songs and said he didnt want to play more songs, just watch the flags.

-He picked up a flower carefully from the audience, before reciting the chorus of anthem. A beautiful moment.

-He told us about how he last night couldn't sleep in his suite at grand hotel, he had stayed on the balcony watching a street artist that was standing still, dressed and made to look like Henrik Ibsen (great norwegian writer) He was so impressed with the control and the beauty of the artist, and asked everyone from the audience to drop him a coin from cohen if we saw him. It was a wonderful moment.

- He told us about how he was grateful for the norwegian hospitality he always had recieved in Norway and wonderred why he always got so great responsse from norway, he thought it might be the climate.

- He dedicated "Take this waltz" to " a dear friend of mine, the great writer Axel Jensen, who passed away a few years ago. He was Mariannes husband"

-when starting Tower of Song, standing alone with his keyboard, he smiled and said "I don't know if you ever have seen one of this before, it is a machine that plays by itself, do not fear" and startet the keyboard rythm.

- He had great contact with the audience, smiled at people who cried out and he picked up several flowers, holding them through his songs.

- After the last song, he thanked us (!) for his evening and said this night would stay in his heart for a long time. He begged us to drive home safely and take care.

- He played "So long,Marianne" with Marianne in the audience. Must have been special for him-

This is some of the moments i remember, beside the wonderful songs of course. The only big disappointment for me was the lack of the wonderful reciting of his poem " ...kisses deep" That would have been the highlight for me, and it never came.
There are many ways a man can serve his time
Top

confetti wrote:Anneri
that was a great clip, thanks. There was a huge crowd there, would you be able to tell us what Marianne said?
jacqui

oh thank you, Marianne looks like a lovely person, very warm and friendly.
"I needed so much, to have nothing to touch - I've always been greedy that way"
Top

There are two articles/reviews in Norwegian newspapers of Leonard's concert in Oslo:

One even includes a photo!

Also, could someone who speaks the language kindly translate this sentence?

I am thanking a lot. It was about it !

I have some photos I shot in Oslo - will organize them during the weekend. This is probably my favorite one!
"Laughing Lenny with his Angels" said a woman behind us when I took the pic

This is great footage form NRK, propably the best from the tour so far:
http://www1.nrk.no/nett-tv/nyheter/spill/verdi/63729

I'll give it a try:
" The aging Leonards baryton (deep voice) has matured with the years, and he carries his material with the power of a lived life"
There are many ways a man can serve his time
Top

that's a brilliant clip, blizzardofice. i love the frozen shot at the end where Leonard takes his hat off, he looks so happy.
"I needed so much, to have nothing to touch - I've always been greedy that way"
Top

Thanks much for the translation, Blizzard, and the link to the great video. Gorgeous stuff. Makes me drool for a DVD.
Marie
Speaking Cohen
Top

It was a most unforgettable concert in Oslo on July 1st, and I feel a deep gratitude to have been there. I was afraid to have too big expectations, like in 1993 when, quite honest, I felt a bit disappointed after the show. This time I was overwhelmed, almost hypnotized. To see Leonard so fit and smiling, to hear his voice so mild and strong, and all those dear wonderful songs - well, the tears would not stop running down my cheeks...

In the end, when they all lined up on stage to wave a last farewell - the audience just would not let them go - there was a man shouting from behind so that everyone could hear him:
WE LOVE YOU! and we all somehow agreed YES!!! and it was fulfilled. I shall never forget this very special moment.

Magic was afoot on Bislett stadium this evening.
Top

I agree with everyone of you. This was an amazing concert! In the beginning I felt the sound could have been better. But the sound improved as the show went on. Mr.Cohen seemed to be enjoying himself, and the audience did too. I`m also happy with my purchase of two Cohen t-shirts, and a licorice lace:)
Top

Another kind of live performance 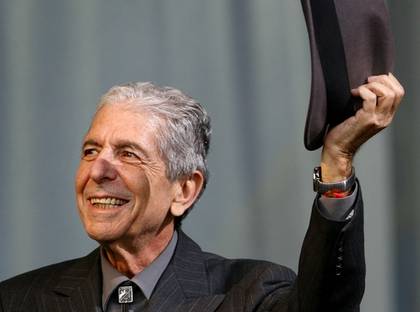 Photo: Expressen
Read a review from Sofiero, Sverige
http://www.expressen.se/noje/1.1219982/ ... nard-cohen
Five stars out of five, and the most given five star review during this journalists 20 year as reviewer.
A few days ago I, Tuula, travelled to Oslo with my husband, Lars, and his son Wilhelm. We were to spend a few days with my daughter, Nina, since she is currently working in Oslo. With us we had tickets for the Cohen concert at Bislet stadium on the first of July.
To our great astonishment we did not only got a great musical performance by Mr Cohen, we also got the opportunity to meet him in person. We were walking down Oslos main street, Karl Johann, outside of the Grand Hotel café when Lars said:
- There he is!
- Who? I replied
- Him! Cohen!

Lars approaches him and asks if it is allright to take a picture. Mr Cohen, who was very friendly and accommodating, approved and stood up with a big smile.
Obviously we were all quite baffled to be in the presence of the great poet. Cohen was sitting at the Grand Hotel café with his daughter Lorca. He stayed at the Grand Hotel, that he found all too luxurious, and with a big smile that he was alone in his room. As a final statement he said: “Wish me good luck!” 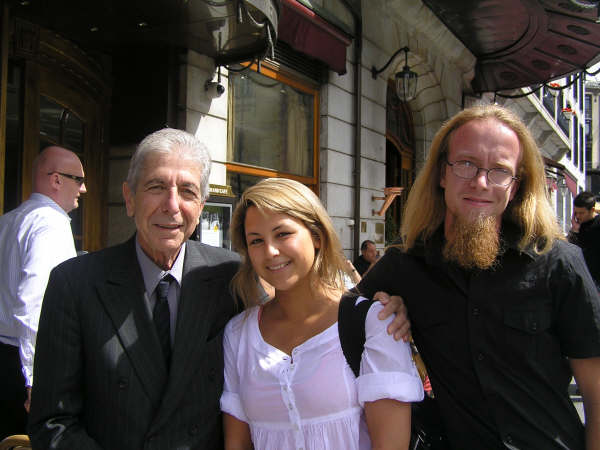 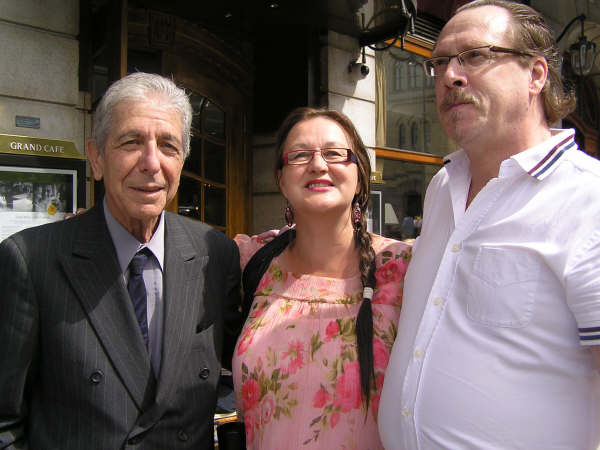