i feel exactly the same and I have been wondering what it is like for the boys? They surely don't feel the same as us ladies, but I wondered what their emotions are, and do they think of Leonard constantly like us or did they just appreciate the music?[/quote]

Or do they just appreciate the high state of excitement Leonard has left the ladies in??[/quote]
this may be rather accurate
"I needed so much, to have nothing to touch - I've always been greedy that way"
Top

(still no fada, see you found yours)
"I needed so much, to have nothing to touch - I've always been greedy that way"
Top

(still no fada, see you found yours)


Go back a bit, Jacqui, I edited my too succinct comment and expanded it.

Séan
If you become the ocean you will not become seasick....Jikan (aka Leonard Cohen)

(still no fada, see you found yours)


Go back a bit, Jacqui, I edited my too succinct comment and expanded it.


I brought it forward:

There was a time when I resonated with Leonard's growling sensual hedonism as it mirrored my mind/body reality... maybe up until 1995. When I was with a lady Leonard was nearly always on in the background. I remember doing long trips on my harley-davidson with headphones on listening to Leonard.

Then I became a Buddhist and ended up doing lots of retreat from 1996 to the present. I abandoned all music for a long time. When I came out of a long retreat in 2001 a friend in Canada sent me clippings of Leonard, referring to his long retreat and to his 10 New Songs album. I realized this was a new phase for Leonard and I delighted in his very meaningful lyrics and the music. Last year I imputed 'special dispensation' from Lama Leonard and took up the guitar again.

I digress a bit. How am I affected by his sensuality now, I think is the question put to the 'men'... monks included, I suspect. I think I have to say I am still 'resonating' with his sensuality. So it's not that I am turned on by Leonard as a man, but that he ignites the sensuality that is still alive and well in this male body. Sort of a vicarious sensual energy. This is OK in our tradition as we are advised to learn how to 'transform' that energy into the spiritual path.

There is another aspect to Leonard's attraction, though. He is so gentle and receptive and welcoming, and kind and warm and loving, and respectful, that he comes across as very feminine. These are not macho qualities. He is a strange mix of growling feminine holiness!

Just wanted to add to all that has been said before, Sunday 15th Dublin concert was amazing. Leonard rocked. The vibe was electric and the band fantastic. I saw Leonard in 93 in Madrid, and I thought I had died and gone to heaven then, this was better. Can't wait for the London O2 gig.
Top

Don't think its anything to do with being a woman a man, Buddhist, Jew, Muslim, christian or even catholic. It was an experience, a sense of timeless fulfilment and if we are still thinking about those emotions as a man or a woman then the art of verse and song has worked for us.
If we all have a place and time and purpose, then by god Leonard Cohen has fulfilled his.
His relatively short body of work has done more for my spirituality than 2000 years of orthodox teachings, now that is an achievement.
As a man I was moved by his talent his art his sensitivity and most of all his humility, I don't think any of us who were at his concerts this year will forget that.
Now that the tequila has kicked in , I shall put my hat on my concussion and dance

Sean and tiggs I have found this rather interesting, even though I asked in a light hearted (gin soaked) manner. I am so glad that Leonard touches deep inside of men as well as women, and in a similar way.

If one just looks at Leonard in a photograph without knowing who he is, you see what looks like a nice, wise, man, but when you listen to the music he becomes so much more, and when you actually see him move and perform, there is another dimension to him that you cannot explain to other people. The power that he exuded from the stage, was immensly invigorating and inspirational. Lyrics of songs that I knew off by heart took on a whole different meaning after Saturday night, and memories of seeing him crouch down or throw his head back to sing out Hallelujah shall live on forever.
"I needed so much, to have nothing to touch - I've always been greedy that way"
Top

Blimey I can't read all these reports, but scanning through I can feel them! Jorcx I read your report and it's too bad we missed the Spanish contingent at The Brazen Head:-( . Biggest night (for forum gathering) was Saturday when 30 or 40 of us met up in the Brazen Head before and after the concert, including Tiggs and Sean here. That gathering alone was worth going to Ireland for. The Irish do everything better than anyone else, imo, including partying.

Thanks so much for all these concert accounts. I would write one, but it's just that I can't speak.

Leonard is clearly a man touring the world and in some small but beautiful way making it a better place.

ps In the Manchester thread Tiggs you recorded something I'd forgotten, thanks!

" Friends it is getting dark, soon I wont be able to see you anymore" ... that sentence is haunting me.

My recollection of Leonard's words is ' Friends it's getting dark, soon we won't be able to see each other any more'. If I'm right, that's even more haunting. If he intended it to refer only to the moment he surely knew that in the dark we could still see him. Maybe someone recorded it and can tell us exactly what he said.
You only have to let the soft animal of your body
love what it loves.
from Wild Geese
Mary Oliver
Top

I think you are right Dierdre, but I am not sure. It is actually more profound the way you remember it. When Leonard dies he won't be able to see us and we won't be able to see him. I don't think this particularly bothers him though, as 'impermanence' is something he has been contemplating for a very long time and I suspect he is at peace with this truth.

Thanks to you and Tony, and the rest of Dublin for your hospitality
If you become the ocean you will not become seasick....Jikan (aka Leonard Cohen)

Right or wrong I'm sticking with what I thought I heard, its locked in there now

But I took the same meaning from it I think that's why I found it so profound.
The brazen was really good and everyone was wonderful. It was great to put faces to some names.
After hearing the gypsys wife I had to listen to field commander Cohen on the long run home. I had forgotten what a wonderful album that is. Lover lover lover sounds like it could have been written yesterday. His work really is timeless.
Top

Leonard is the sort of man that will live in our hearts forever, dead or alive. I think he is cool alive and hope he stays that way for a long time. We were all privledged in Dublin to witness his concerts. I just wish there had of been more.....

Georges.
I am a right bad ass, dankish prince and I love my Violet to bits.
Top

daka wrote:'impermanence' is something he has been contemplating for a very long time and I suspect he is at peace with this truth...

George.Wright wrote:Leonard is the sort of man that will live in our hearts forever, dead or alive...

These things are true, but to me what was beautiful was the moment he said it. Taking something that was happening - day turning to night - and making poetry out of it. Reflecting the spiritual implication of that darkening sky to us, in an acutely personal way. Right there.


damellon wrote:He surely knew that in the dark we could still see him.

I was at the sat nite concert and had fantastic seats - 7 rows from the front centre stage. this man is amazin. he is too coolhis voice was better than ever ....if thats possible. Truly an amazin experience and the best concert iv ever been at - and iv been to lots!!! A woman text into gerry ryan on monday and described Leonard to a tee!! someone with a lovely way with words. I think this concert has changed peoples lives. ( Sean!! Du Still have ur Harley?????????!!!!!!!!!)

No, I sold it in 1996 and used the money for retreats. I didn't miss it for a moment, much to my amazement. Lately, living in Spain, I must admit that I think now and then, about this climate, and these country/mountain roads being ideal for motorcycle riding. If I ever descend the mountain, I may end up back on Boogie Street with a Harley. 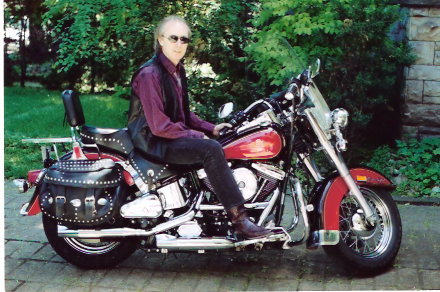 If you become the ocean you will not become seasick....Jikan (aka Leonard Cohen)

It's comin' from the feel that this ain't exactly real, or it's real, but it ain't exactly there! . Jikan
Top
Post Reply
253 posts