Saddened to hear of the passing of Seamus Heaney today, Ireland's Poet Laureate. My favourite of his poems:

Digging
Between my finger and my thumb
The squat pin rest; snug as a gun.

Under my window, a clean rasping sound
When the spade sinks into gravelly ground:
My father, digging. I look down

Till his straining rump among the flowerbeds
Bends low, comes up twenty years away
Stooping in rhythm through potato drills
Where he was digging.

The coarse boot nestled on the lug, the shaft
Against the inside knee was levered firmly.
He rooted out tall tops, buried the bright edge deep
To scatter new potatoes that we picked,
Loving their cool hardness in our hands.

By God, the old man could handle a spade.
Just like his old man.

My grandfather cut more turf in a day
Than any other man on Toner's bog.
Once I carried him milk in a bottle
Corked sloppily with paper. He straightened up
To drink it, then fell to right away
Nicking and slicing neatly, heaving sods
Over his shoulder, going down and down
For the good turf. Digging.

The cold smell of potato mould, the squelch and slap
Of soggy peat, the curt cuts of an edge
Through living roots awaken in my head.
But I've no spade to follow men like them.

I too am saddened to read this news.
Seamus Heaney was the most famous man to come from the village where I grew up.
This poem reminds me vividly of my own father in his vegetable garden with the drills of potatoes.
Although he was not a farmer, he was of farming stock, and it's in your blood for ever.
Although our family moved away in my late teens, Bellaghy is always "home" to me.

Thank you for posting this poem.

Many thanks Seamus for your poetry and prose. May you Rest In Parnassus (and share a drink or two with Mr. Kavanagh).

I stumbled upon this recently - a thesis examining the work of Leonard Cohen and Seamus Heaney:

All the best,
merton
Top

Thanks for the link merton, looking forward to a good read of that tomorrow for what I've planned to be a lazy Sunday!

Very sad news from Dublin, city of poets and singers......
Here is my favorite poem: 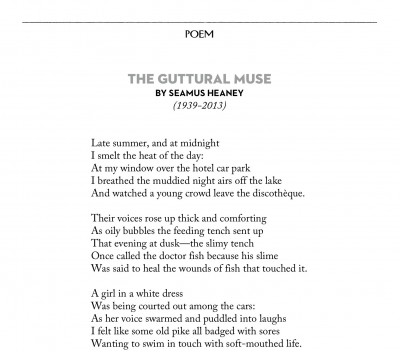 Return to “Other Writers and Writing”