Can't believe what I got to know this morning! Willie Nelson is coming in my city - Basel, Switzerland!

Even only a 10 minutes' walk away from where I live.

Who did already see him of you and can tell me about? Is he good in concert and how long are his shows usually? 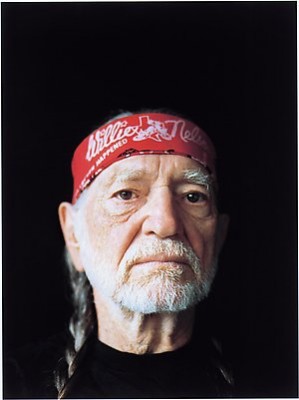 I went to see him in Philadelphia a couple of years ago when he came to the Tower Theatre (where Leonard's show was last October). I had never seen him live and I went because - well - a legend was "passing through." I had watched him performing on live shows on television - and streaming on my computer (Eric Clapton - Crossroads, etc.) and I sort of was not expecting much because it seemed like he "talked" his way through songs these days. I was wrong. The show was terrific. He was there to put on a show and he seemed totally happy and completely involved. His musicians have been with him forever and are the best. I particularly liked his harmonica player, Mickey Raphael. A very relaxed and comfortable feeling coming from the stage - and, of course, he has a huge fan following. I cannot remember how long the show was - certainly not three hours like Leonard's shows - but it was long enough. If you are sitting up front, take a picture with you - or something - and you might be lucky enough at the end of the show to have him sign for you. Someone told me that he usually takes the time to do this after his shows - before he leaves the stage. Also, at the end of the shows, apparently it is a custom that he will throw out head bands to the audience (like the one in your picture). I was about 12 rows back - so not close enough. 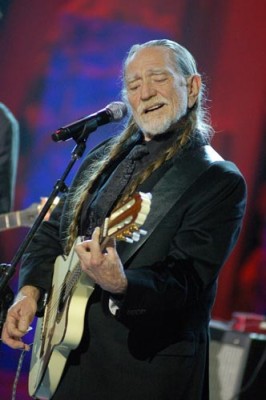 I didn't take that picture - but I do have one that I took of the beautiful Prevost tour bus that he owns. I think it is named "Honeysuckle Rose." I doubt that he would take that to Europe with him though! 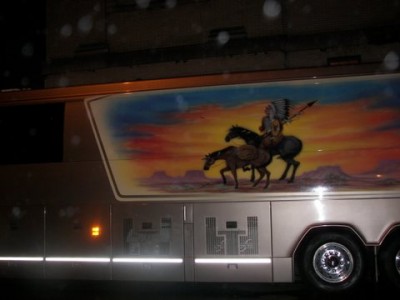 I also tried to take video but the ushers were not cooperating (fortunately at Leonard's show there was no problem). I have three pathetic little offerings on YouTube if you are interested. Trust me - it does not take long to watch them because I was thwarted by the ushers and shut down at every attempt!

Angel Flying Too Close to the Ground
http://www.youtube.com/watch?v=T6xdyRrTUIo

Funny How Time Slips Away (you can hear the usher telling me "no video" at the end. Also - it was just before the presidential election here in the USA and you hear someone yell "Willie For President.")
http://www.youtube.com/watch?v=iBRBXBwYCl8

And you can see in the video that he was playing his old guitar that night - "Trigger" - the one with the big hole in it.

I was lucky to see him in a great little theatre - and if I see he is "passing through" again - I will head on out to see him. I don't know how your show will be - but from what I saw, Willie enjoys performing, and it was a good experience for me. I hope you have a wonderful time!!
Top

How interesting, thanks for info. He is playing Glastonbury, then. As is Robert Plant I think.
Top

faithful, sturgess, Diane - I've seen Willie a couple of times (or was it 3) at the self proclaimed worlds greatest honky tonk bar in Fort Worth, Billy Bobs (which has a rodeo inside it!!). Like Dylan he doesnt say much, just launches into song and keeps going at a fair pace. Unlike Dylan, he smiles beatifically almost throughout unless he is concentrating on 'Trigger' which has a very distinctive sound. He does not hit the high notes like he used to but the band is as good as ever.
Top

Hey Kush - I was just about to add a bit more - and then you posted. As I said above, I would definitely go back again to see him. I doubt I would go to an arena - only for Leonard will I do that. But at a theatre - yes indeed!

It is hard to find good video from Willie's recent live shows - maybe he has a no-camera policy? I don't know. But this is a fairly recent one - from a concert in Amsterdam that would have been just about a month after I saw him. The close-ups are from the big screen I think - so a big squished - but you can get a good idea of what to expect - and also see a bit of his most excellent musicians. He does travel with a grand piano and that is his sister at the keyboard.
http://www.youtube.com/watch?v=9l-mdEMnHLM

And in looking for this - I came across a wonderful clip of when he was much younger and appeared with Brenda Lee. He looks like a young kid standing on the stage in his blue jeans and denim shirt. He has quite wonderful eyes I think - when he looks at you - you know it. They look as true as the sound he gets from 'Trigger.'

You're Gonna Love Yourself In The Morning
http://www.youtube.com/watch?v=99n2bIaZifA
Top

nice videos sturgess. I had no idea who Brenda Lee was but liked the song very much. Musically, he's one versatile cat....some of my favorites from youtube -

and Blue eyes cryin in Austin

Wow - thanks for the little WIllie concert Kush! Great videos. I especially love the last two - and in the last one, the sound Willie gets out of that old guitar is amazing - it is "true."

Can't help it - a couple more.

A Song For You
http://www.youtube.com/watch?v=ftEkEXFcQyE

And this is a gem - from a Ralph Emery show - and you see country legends - Kris Kristofferson next to him, Porter Wagner - and many other familiar faces - just sitting quietly on the stage listening to Willie sing and play -

very cool thanks. Enjoyed both of them. I think Willie and Ray Charles had a pretty tight connection. I have a quote from Ray Charles in the liner notes of one of the CDs and the first couple of lines goes

"When you are very close and you love somebody like I love Willie, there's not very much you can say. We've been very very close for a long time. If you are lucky you have maybe one or two people in your whole life that is like he is. Willie is the type of human being that is very authentic, genuine, for real."
Top

Willie just posted this video on his FaceBook - from a show two days ago at the Overture Center for the Arts in Madison, WI. It looks like it was taken from backstage - or maybe by a fan on stage left. But it is a video of what I mentioned earlier - Willie at the end of the show, signing for the people upfront. A couple of the women get a kiss on the cheek - and a fan makes it onto the stage and is quickly escorted off. It looks like a sold out show and the people are in no hurry to leave.

faithfully - if you are still reading here - and you have a chance to see him - I would say - get there!

What a nice touch! When I saw the Highwaymen years ago, Willie was the one who came out to greet the fans outside, (in a state fair setting) after the concert - such a super guy!

Beautiful, beautiful, beautiful. I find the words, Ray Charles is one of my other favorite, his voice, I can always hear. When listening to songs For You,,me the tears fell his face.
He had great musicians around him.

Willie Nelson. I not know him, but after hearing his voice, I consider it good.
His songs are very good.

I've been a huge Willie fan as long as I've been a Leonard fan - over 30 years - have seen many of his concerts over the years, always brilliant. You will love him, his concerts are always a great night out.
Go and enjoy........
Top


and a Willie classic with the sexy chicks from Dallas...