Anyone heard the new Christmas Bob Dylan CD? Surely it has to be a joke, or does it grow on you? Maybe..
Somebody must have died for you
A Thousand Kisses Deep

Is it a joke you ask. Very difficult to tell. But even if you were stranded on a desert island with nothing else to listen to, you could never get used to it; see for yourselves....

But - as to your question - no - I don't think it is a joke. But if it is, I hope it sells well because Bob is donating all profits to charity - I believe to feed hungry children.

In the other thread there is a link to the album and you could listen to short clips of all the songs - and I did.

Bob's voice is shot to hell - that is for sure - but it definitely is Bob. And I laughed at his pro-nun-c-aye-shuns a lot - especially the Latin - but by the end - I believed every word he sang.

By the way, I was watching Bill O'Reilly's show on Fox last night and at the end of his show, O'Reilly usually names a "pinhead" and a "patriot" for the day. Last night, O'Reilly laughed at the thought of Bob singing "Chestnuts Roasting" etc. - but the "patriot" honor went to Bob Dylan for producing this Christmas album and donating all profits to a worthy charity.
Top

sturgess66 wrote:... the "patriot" honor went to Bob Dylan for producing this Christmas album and donating all profits to a worthy charity.

where hunger is ugly, where souls are forgotten

According to this section of bobdylan.com, where more info and a polka version of "Must Be Santa" (with a revised listing of Santa's reindeer armies) can be heard:

During this holiday season, Bob Dylan’s immediate donations from the Christmas In The Heart proceeds will provide 500,000 meals to school children in the developing world through the World Food Programme, 15,000 meals to homeless people in the United Kingdom through Crisis and more than 4 million meals to 1.4 million families in America through Feeding America.
....all men will be sailors then....
Top

Saw this on google images. 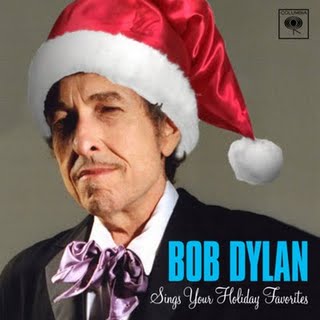 a cross between tom waits and baby gramps
-----------
i saw the album previewed on BBC1 tv breakfast yesterday morning.

i kinda like it - the proceeds go to a worthwhile charity so everyone should buy it.

hehe, that should have been the cover

i expect there'll be lots of dylan-xmas images circulating on the internet now.

this one from the sun newspaper :

I hear that the Chicago Sun Times gave the album a rating of 0 stars out of 10!
Top

...Kings College Choir and Dylan together on BBC Today - clip found here...a producer's description of this was that Bob sounded "like a drunk who had burst into King's College Chapel on Christmas Eve" ...
....all men will be sailors then....
Top

Can't judge by the few seconds that I heard of the CD and I don't want to
disparage an endeavor whose profit will go towards charitable ends...
but Dylan is no Burl Ives. The manger scene with Dylan posted by Sebelmoth2003
is priceless.

The album is for me a revelation. I love it. I sit with a big smile on my face every time I play it….and I hate Christmas…...so the lad has done well....again:-)

I think Terence Blacker in the Independent nailed Bob and the album…..

“For the past 12 years, Dylan has been nominated for the Nobel Prize for Literature. As the list of his achievements has grown longer, so have the reasons why he will never win it. He is a musician, he is American, he hates award ceremonies and now, with an album of festive favourites called Christmas In The Heart, he has definitely blown his chances. If there is one thing the earnest, thin-lipped, committee members in Stockholm distrust above all, it is a sense of humour.

“Extraordinarily, there are still a few people unable to appreciate the wonder of Dylan. They are deaf to the music he has written and fail to appreciate the startling, effortless originality of his lyrics and prose. Some associate him with unfashionable movements of the past hippies, protest, the great folk scare of the 1960s. Others make the usual dreary comments about his voice.

“So it has been with the Christmas CD, a charity product that will bring warmth, individuality and wit to the Christmas season which needs it most. Dylan’s version of “Hark the Herald Angel Sings” may not feature on many people’s desert island lists but it is hard to believe that anyone could listen to his mad, joyous Tex-Mex version of “Must Be Santa” without feeling better about the world.

“Even those allergic to his work must surely admit that the case for Dylan goes beyond his music. In his own peculiar, perverse way, he has survived extraordinary pressures to offer a sort of unfolding lesson on how to live a full and fulfilled artistic life.

“He has shown that talent is nothing without work. For over 50 years he has been writing and composing with a wild extravagant energy, performing on what has been called “the never ending tour”. In his spare time he has written a brilliant memoir and has presented the groundbreaking Theme Time radio series.

“He has never been trapped by the past. The title of the 1966 documentary about his tour of London, Don’t Look Back, has proved to be prescient. Unlike almost any other celebrity in his late sixties, Dylan has never rested on past achievements.

“He knows that only the second rate enjoy the trappings of fame. To others, his refusal to play the apparently harmless games of public life – the chat shows, the film premieres, the photo shoots – may seem like arrogance but, from an early age Dylan has recognized that the public want something back in return fro the gift of celebrity.

“With every decade, he has broken down barriers. The overt protest songs of his youth were merely the start of a life of subversion. Thanks to an instinctive bloody-mindedness, he has embraced precisely the music, the religious faith, the business deal which is most likely to wrong-foot those who believe that they know him.

“In doing so, he has shown that, in music, there are no rules of cool. His radio shows have helped revive all sorts of genres – unfashionable, politically-incorrect – which were in danger of being forgotten.

“His has not been a comfortable life, and he may not be a particularly nice man. Yet, there is a sort of glorious integrity to someone so absurdly gifted, so lauded, who can remain so stubbornly himself. We are truly lucky to be around the same time as Bob Dylan.”
Solitudine non é essere soli, é amare gli altri inutilmente - Mario Stefani
Top

But I LOVE the little clip I heard of "Hark the Hero-ed Angel Sings!!!"


The album is for me a revelation. I love it. I sit with a big smile on my face every time I play it….and I hate Christmas…...so the lad has done well....again:-)