Forum for collectors and traders' of Leonard Cohen's music and poetry.
Post Reply
4 posts • Page 1 of 1

This recording of Leonard's 1972 concert in Tel Aviv has been around for a number of years, but I did not find the entire recording on YouTube, so I have uploaded it here: https://youtu.be/IyrdtDhWWeM 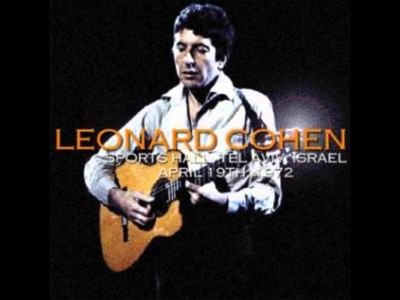 The concert has some unique moments, resulting from the clash between security guards (whom Leonard calls "The Men in Orange" at one point), and the audiance wanting to get closer to the stage.

In the interim and as a response, Leonard improvises what has become known as the "Song To The Machines" (10 minutes into the recording) where Leonard, obviously distressed, expresses his wish that the "Machines" get beat up as "A final solution".

Other gems include his intros to "Sisters Of Mercy" and "Suzanne" and the then new "Chelsea Hotel" in its earlier version (Chelsea Hotel #1).

I have also provided a link to download the recording here: https://drive.google.com/open?id=0BxLxb ... 0VrNDBiTnc

Some of these goings-on are documented in Tony Palmer's excellent and revealing film "Bird On A Wire", and relevant clips can be found on YouTube.

Its intersting to note that on the next day (or perhaps one more day after, there seems to be some confusion), Leonard's concert in Jerusalem became a stranger happening still. Leonard walked off stage within minutes of the show beginning, excusing himself because he could not "deliver". Rumor has it that he was only able to continue after dropping some acid. Strange days indeed.

I was born a very few days after this concert took place, and I don't know if Leonard was still here in Israel, but I'd like to think he was.