The Classic Interview on Amazon

Forum for collectors and traders' of Leonard Cohen's music and poetry.
Post Reply
5 posts • Page 1 of 1

The Classic Interview on Amazon

Does anyone no anything about this? A CD to be released on Jan 27th.

Don't know exactly what's on it, but here's some info:
It's on the PLASTICHEAD label:
http://www.plastichead.com/catalogue.asp 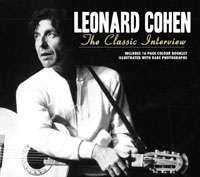 Thanks for the link Davido

(and getting the image up

) it gives a little more info.


Having returned to the live arena in 2008 with an energy more associated with a performer a third of his age, Leonard Cohen has elated and delighted every one of the fans who witnessed these shows. With talk of more dates forthcoming as well as a new album on the cards, Cohen is once again rightfully regarded as among the most important writers and performers of the modern age as he inspires and influences new generations of musicians and songwriters. This disc features lengthy conversations with Leonard Cohen recorded at different points during his extraordinary career. From a 1961 little heard discussion about an early poetry collection, right through to a 2008 interview about his live return, this 12 track collection shows a side of Cohen not always obvious from his music and writing, revealing a man with a mind as sharp as a knife, a wit as lively as a puppy and a soul as enlightened as the holiest of men.

It has been for sale on ebay for a couple of weeks, but I have found that it is available from HMV (pre-ordered) for £5.99.(This is in UK)
Dave
"Politics is the art of looking for trouble, finding it everywhere, diagnosing it incorrectly and applying the wrong remedies"~ Groucho Marx
Top

I've ordered a copy from Cob Records,should have it by Monday,if you want me to make you a copy let me know.
Manchester 19th June/Cardiff 8th Nov
Top
Post Reply
5 posts • Page 1 of 1