This is for your own works!!!
Post Reply
250 posts

and Omar Khyaam whispered,
"a loaf of bread
a jug of wine
and thou beside me singing
in the wilderness-
this is paradise enough for me, now!"


Last night I battled with andamooka
silently screaming, beating its chest.
It stood there,
immovable,
indifferent
my life but a red speck
my heart but a red drop
in this vast barren desert
where love does not end.
Top

I'm going to put this here as in sense it belongs to one I posted here before.


Instructions on how to make ink from scratch

The fire has gone out.
All that’s left is ashes
burnt bits of paper, wood,
bone, grit. I scrape the soot
from the edges of the pit,
mix it with the honey you
left on my fingers and the whites
of an egg smashed on a rock.
I have no words left
but will paint every letter
that I can remember of you.

Cate – your poem is unexpected and breathtaking. I've read it over and over.

This whole thread is lovely to re-read every once-in-a-while with its poetry and musings. Thanks for your poem, and for bringing this thread forward again.
Top

Instructions on how to make ink from scratch

I suppose that is what writing poetry is. "...to make ink from scratch"...Wow.
I love the title.
Love the poem.

This poem takes me back to the beginning of this thread; Lizzy, Dianne, Boss and all the other wonderful characters rolling around in the back of that old truck/ute, somewhere in Wales.

What a great poem; short yet compounded with possibilities from the fascinating title to the to the last mysterious "you".
It certainly belongs on this thread....but....It really should have its own thread.
Keep writing; your poems just get better and better.

Thank you Mat - I do love this thread and the poems that you and others have posted here. The thread itself is like a story and think my poem is happier here then stuck on it's own.
I'm happy that you liked it.

Keep writing; your poems just get better and better.

Thank you Mat! That means a great deal to me.
Top

And coming back in to this thread, what better place to land than in the back of Mat's old rusty and beautiful, with Cate sharing her poem that drives you right back to its beginning as soon as you've reached the end. It overflows with images and meaning. Such a creative approach for your messages.

Thanks, Mat, for including me there. Hi to you and hope you, your opals and dear ones are going well.

Your poem couldn't be happier than it is here, Cate.
"Be yourself. Everyone else is already taken."
~ Oscar Wilde
Top

Thank you Cate for this great poem and
thank you for putting it on this thread, this thread meant a lot to me.

I have not been back on the forum since over a year, it is nice to be right back where I left.

Thank you Mat and all the others for the ride, I loved it.

I bought another old truck
75 Land Rover 4WD
I am re-painting it
Enamel and brush
Nothing fancy
I’m going over the old colors
Like for like
I don’t want it to look new
But I want it to look loved
And it is.

I bought it from Berny
My friend and mining buddy;
He was going to sell it to
Someone else
37 years of history gone,
Almost.

Slow and sure
I saunter on.


MatbbgJ.
"Without light or guide, save that which burned in my heart." San Juan de la Cruz.
Top

Your poem made my day, Mat; (or maybe resurrected it...)

To appropriate (appropriately so) your words about a world-class poet in another section of this forum,
you are "a real craftsman." And to add my own: and a real artist. "Slow and Sure" is terrific. Objects
and well written poems can help to put us in time and place.
Top

I love it, too, Mat. I love how you so smoothly worked you way through this poem, the details, the overview, the perspective and philosophy. The moment.
Not as old, but I have a new but old truck which saved the day, just tonight. Switched vehicles at my repair shop.
P;ease tell Berny I said Hi. I'm so glad he'll still be able to have more good times in his old, faithful truck, thanks to you.
I was happy to see Katrin stop by when she did, even though I didn't comment at the time.

As most of you know I’m a visual artist and I don't usually write poetry. This is the second one (if you can call it a poem) that I've attempted.
But I have just noticed this wonderful thread and it has inspired me to contribute the following. I did it in probably fifteen minutes. I hope it’s OK.

Moving On
or (Further Down The Road)

I loved him completely, unconditionally
he was like no other I ever had
it just felt so right
that he came into my life

I’ll never forget the forlorn look
on his face when I drove past him
for the last time in a brand new shiny car
his regrettable replacement!

This is a true story (another layer within) and I still grieve for my “Brumby” (Subaru Ute 1992). I live by the sea and he was getting so old, rusty (but still beautiful) and temperamental from the salt air that I reluctantly traded him in for a newer car (regrettably not a ute).

Here he is in his glory days when our love was fresh and new: 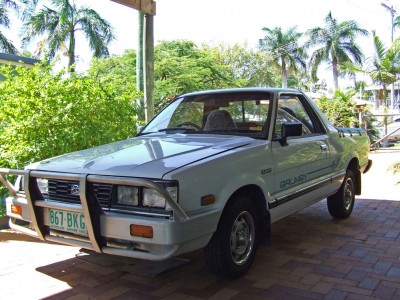 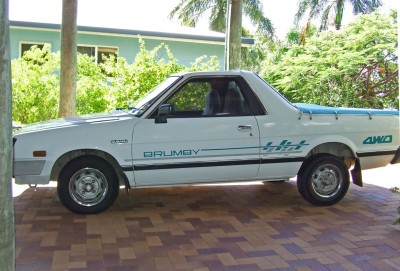 There are still a few Brumby Utes left on the roads here in Australia; unfortunately they ceased production in 1992. When I’m out driving and I see one my head turns to see if it is my ‘lost love’. I don’t want another one – I want him!

…….and here’s a bit of serendipitous karma for you. His number plate is original as I bought it. The first and second letters are my initials and I decided at the time the third one was for ‘good’ which it was during the course of our time together!

EDIT: I've just re-read my 'poem' and one of my lines reads suspiciously like a line from Anthem

I could change it but that is how it came to me when I first wrote it so I will let my subconscious mind have its way!
It doesn't have to be perfect, it just has to B4real ~ me
Attitude is a self-fulfilling prophecy ~ me ...... The magic of art is the truth of its lies ~ me ...... Only left-handers are in their right mind!
Top

I could change it but that is how it came to me when I first wrote it so I will let my subconscious mind have its way!

I enjoyed your poem Bev. I was a bit shocked when I got to the line "I just had to realise/ he was too old for me" - no offense but I thought that was a pretty horrible way to treat someone who had treated you well and then of course I realized it was a car.