Back in rainy Finland from the heat of Hydra! We had wonderful time, and the weather was more than favorable (30-36 C)... The final number of participants was 80+ something, so this was the biggest Hydra meet-up we have had after the 2002 Event. We were happy to have many first-timers among us, also from far away (like Canada & Japan). Roloi was our meeting point, as always, and we sat there to the early hours enjoying the warm night, the unique atmosphere of the island, and LC songs. Roloi is now hosted by Yannis and Vasili. Nickolas is working at Portofino (for a year, he said, before getting retired).

During the days most of us went to the beaches (Mandrake, Vlichos, Kamini, Bisti...), and on Friday some 15 of us climbed to the Monastery on the top of Mt Eros (and it seemed to be the hottest day...). For the first-timers also a city walk to a certain spot was made. Saturday evening was spent at the open-air cinema; thanks to Demetris the owner opened it for us (otherwise it is used only during July). It was great to see some LC footage under the stars! Mrs. Evangelia and Nickolas were also invited to join us.

The group had dinners together at Cristina Manolis, Vigla, Pirofani, Kodylenia, Duskos, and the new Castello Restaurant. Castello opened only 2-3 days before our Sunday dinner. The old prison has been renovated in most wonderful way. Henning used his charm and negotiated us good prices! A great (but expensive) place to see the sunset!

Eija shot a lot of pictures, and we will upload a selection of them to a Gallery page as soon as possible.
1988, 1993: Helsinki||2008: Manchester|Oslo|London O2|Berlin|Helsinki|London RAH|| 2009: New York Beacon|Berlin|Venice|Barcelona|Las Vegas|San José||2010: Salzburg|Helsinki|Gent|Bratislava|Las Vegas|| 2012: Gent|Helsinki|Verona|| 2013: New York|Pula|Oslo|||
Top

Oh, I can't wait, Jarkko. I was right there with you as you described. I know others have stayed on for more, glorious days and nights... I guess you've been rather busy enough other places this year to make doing that a little less convenient

Thank you for your wonderful description of the basics of what everyone did. I'm looking forward to seeing the Castello. Ohhhhhhh... how I wish, how I wish.

Yes, unfortunately Eija and I had to leave already early Monday morning because of other commitments. By the way, I've got Henry Denander's new book of poetry and watercolors.
He is a Swedish friend who has a wonderful house very near Leonard's.
The title poem tells us how Leonard was sitting at the next table
in the small Loulaki Bar back in 1988.
1988, 1993: Helsinki||2008: Manchester|Oslo|London O2|Berlin|Helsinki|London RAH|| 2009: New York Beacon|Berlin|Venice|Barcelona|Las Vegas|San José||2010: Salzburg|Helsinki|Gent|Bratislava|Las Vegas|| 2012: Gent|Helsinki|Verona|| 2013: New York|Pula|Oslo|||
Top

jarkko wrote: The group had dinners together at Cristina Manolis, Vigla, Pirofani, Kodylenia, Duskos, and the new Castello Restaurant. Castello opened only 2-3 days before our Sunday dinner. The old prison has been renovated in most wonderful way.

On the way to Castello we stopped to take some pictures (a lot of pictures, to be exact) and we met a most charming (and good-looking) painter who spoke with our very international group in english, italian, french and greek (unfortunately, I don't know his name!). He was most bewildered to find out about our meetings, asking us if we are all in the music industry, or why are we so inerested in Leonard Cohen?! Anyway, one of the things he told us was that Castello used to be a pressing mill for olives, and never a prison (Jarkko, where did you find out it was a prison?).

The photo below shows some of the new Castello restaurant. The photographer is Anna from Italy. jarkko wrote: (Jarkko, where did you find out it was a prison?).

I have always believed it was an old arsenal or fort! Guess it has had many functions during time. In the 70's (when I first visited Hydra) it was an (illegal) camping site. Many packpackers.

An intriguing looking and sounding book by Denander... when you get a chance, can you post the title poem for us, Jarkko

A great looking restaurant! Sophia ~ your hair has grown and you look lovely as ever! Hi Sam, Hi Ute [going every year

Jarkko, where did you find out it was a prison

Good question! I'm not 100% sure but I believe it was Kelsey of Saronicnet, and if not, anyway one of the locals. Maybe it wasn't a prison after all - there seem to be also other big questionmarks in Hydra's history (like the arched corridor up on the hills on the way to Vlichos; who, when and why built it?).
1988, 1993: Helsinki||2008: Manchester|Oslo|London O2|Berlin|Helsinki|London RAH|| 2009: New York Beacon|Berlin|Venice|Barcelona|Las Vegas|San José||2010: Salzburg|Helsinki|Gent|Bratislava|Las Vegas|| 2012: Gent|Helsinki|Verona|| 2013: New York|Pula|Oslo|||
Top

Well, I've always known Castello to be the old prison, and that made sense because the windows were (are?) barred even high up ... its architecture is forbidding, and not at all aesthetic (e.g. no pitched roof). While I suppose it may have been an olive press at some time, Hydra has never had a huge number of olive trees (the forests are predominantly pine) ... certainly not enough to constitute an industry (the best oil comes from the mainland). I would have expected farmers to have pressed their own, or exported the olives to a city as picked.
“If you do have love it's a kind of wound, and if you don't have it it's worse.” - Leonard, July 1988
Top

Hundreds of photos coming--here is a tease....
Christoph as poster boy for the Castello Restaurant (otherwise known, to some of us, as Fawlty Towers...) 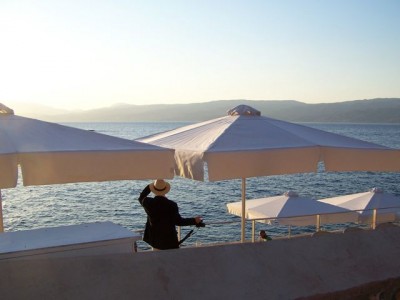 Our gracious and charming hosts at the Roloi (otherwise known as "home"),
Vasilis Doupis, Panagiotis Katsikas and Giannis Doupis: 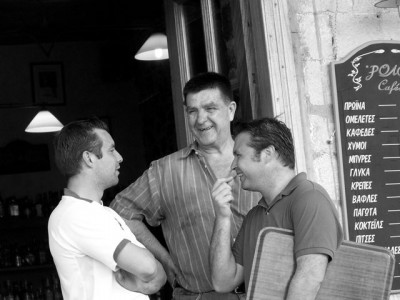 Jarkko and Eija as master and mistress of their domain: 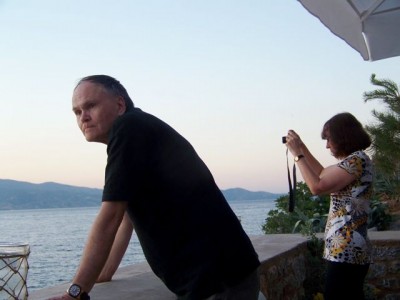 The serious side of Henning: 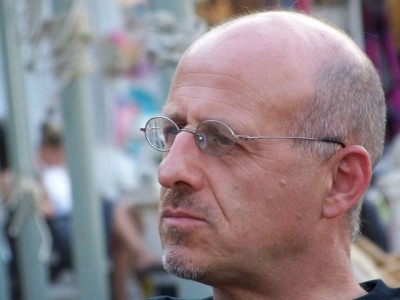 You're not just a poet; you're a photographer, too. Excellent photos! I love your composition and their 'simplicity,' which paradoxically makes them more complex; and your black & white with the Roloi crew is masterful. I hope you'll post many more of yours. Ahhhhhh. So satisfying to look at them


[And is Anne "from Italy," who took the first photo, the same, beautiful Anne I met from Poland the last time on Hydra?]
"Be yourself. Everyone else is already taken."
~ Oscar Wilde
Top

Lovely photos, Anne (I really like dark-dressed Cristoph on the white background). Do you also happen to have one of yourself? I admit with shame that names and faces mix up in my mind in a terrible manner right now...

Lizzy-this is another Anna from Poland (and Italy), but lovely too.

We send you & Eija the sunshine from Hydra.